Lumads end week-long stay in UP Diliman with cultural night 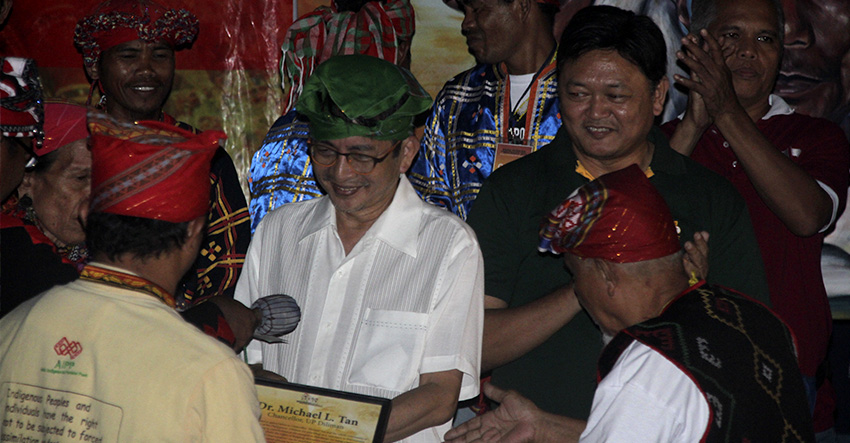 TUBAW. University of the Philippines Diliman Chancellor Michael Tan (in green tubaw) accepts the tokens of appreciation from the lumads of Manilakabayan 2015 during the ‘Gabi ng Pasasalamat’ prepared by the lumads at the College of Human Kinetics on Friday evening. (Earl O. Condeza/davaotoday.com)

DILIMAN, Quezon City – A Friday night of cultural performances was prepared by the lumad delegates of the human rights caravan Manilakbayan 2015 from Mindanao to thank the University of the Philippines Diliman community for allowing them to stay in the campus for a week.

During her opening remarks, Bai Bibyaon Ligkayan Bigkay, a Matigsalog woman leader and the only woman chieftain in Mindanao who fought against the incursion of big mining and logging companies in 1994,expressed her gratitude to the UP community’s “wholehearted and warm welcome” for them.

Amidst the reports on the presence of military intelligence in the campus and police forces, students from UP Diliman and other schools visited the camp and listened to their plight and joined their call to stop the killings of lumads and advocates and to save the schools their community built.

“I thought I lost hope as some of our Lumad brothers and sisters were already dead, but there are still people who are here to help us,” Bibyaon told the audience who are mostly students and administration of UP Diliman.

Bibyaon said that if the military and mining companies will not move out from their communities, “Gagamit na ako ng bangkaw at suyak para labanan sila (I will use spears and wooden spikes to fight them).”

She added that “what the military does is camping in the community and raping our girls and women.”

Bibyaon clarified that they are “just farmers, not members of the New People’s Army,” contrary to what the state forces claim them to be.

“We just want to send our children to school,” she said.

“The military is not looking for armed group in our community, we are their target,” she added.

As a token of appreciation, Lumad leaders who joined the Manilakbayan gave Agong, Malong, and Tubaw to the UP Administration and other members of the UP Community who worked together to make the ‘Kampuhan sa Diliman’ a success.

Jomorito Goaynon, spokesperson of the Manilakbayan 2015, explained that Agong is traditionally used to call members of the community for a gathering especially during emergencies.

Goaynon explained that the Agong represents the UP Diliman Community, “as it call different people around the campus” to support the plight of lumads.

UP Diliman Chancellor Michael Tan, who accepted the Agong, said that instead of text brigade, they will use the Agong in case state forces will again enter the campus.

Last October 21,the UP Police nabbed six military intelligence who entered the campus.

Meanwhile, Tan assured the Lumads that the community’s support to them will continue.

“We will follow and visit you [Manilakbayan2015] in Liwasang Bonifacio,” he said.

“I know that Indigenous Peoples from Cordillera will join you this coming November 18, we will be there at dawn to join you,” he added.

Tan also gave thanks to the whole UP community, including Barangay UP, UP Police, and the maintenance office.

“This would not happen if we did not work together,” he said.

During the week-long stay of Lumads in the campus, donations such as clothes, rice, canned goods, bottled, water poured in from different groups. Some media outlets, artists’ groups, and student groups also set up food cart inside the camp.