‘Mabinay 6’ pleads not guilty to charges 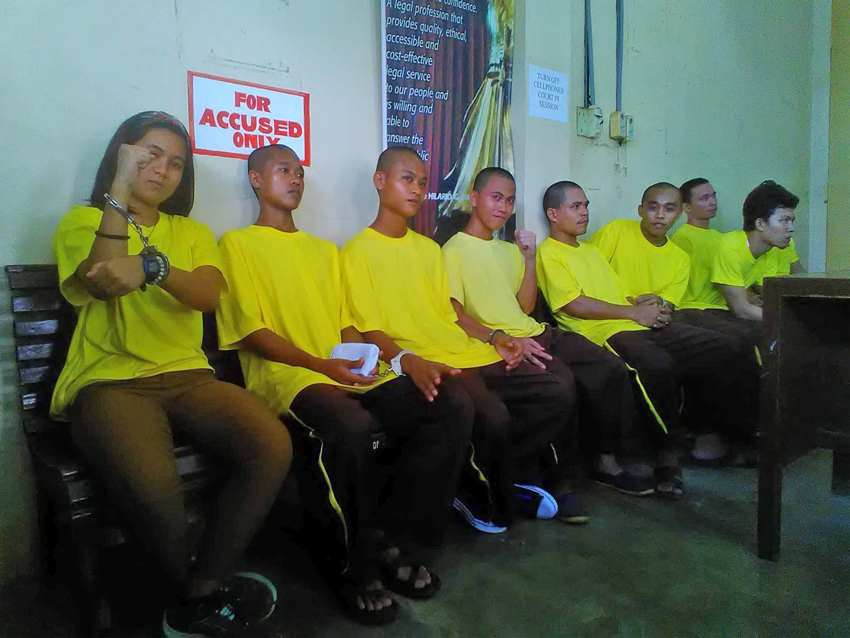 Youth activist Myles Albasin five others pleaded not guilty to charges of illegal possession of firearms and explosives before Judge Rosario Carriaga of the Regional Trial Court Branch 45 in Bais City on Wednesday, May 2. (Photo courtesy of Aninaw Productions)

DAVAO CITY, Philippines – The six allegedly members of the New People’s Army known as Mabinay 6 pleaded “not guilty” to criminal charges filed against them.

Myles Albasin, along with five others entered the not guilty plea before Judge Rosario Carriaga of the Regional Trial Court Branch 45 in Bais City on Wednesday, May 2.

Atty. Benjamin Ramos, lawyer of the Mabinay 6 said that a pre-trial conference was set on July 11.

They likewise filed a petition for bail and is waiting for a hearing to be scheduled. They have filed also a motion to amend the commitment order to Bais City Bureau of Jail Management and Penology (BJMP) and seek that they will stay in Provincial Jail in Dumaguete for security reasons.

However, the court declared it moot and academic because they are currently detained in Bais City.

According to Atty. Ramos, they filed a petition for transfer of detention to Provincial Jail in Dumaguete City due for security reasons.

“Bais City BJMP is a remote sugarcane plantation area, 2 km away from the city and it is risky to families, lawyers, and even my clients. It would be best for the safety of the Mabinay 6 and for the families who regularly visit,” he added.

The 62nd IB said in a statement in March that they arrested fully armed NPAs “doing harassment and extortion activities” in Barangay Luyang, Negros Oriental. They said a gunbattle ensued for 45 minutes leading to the capture of the six alleged guerrillas, “including one amazon who is a Mass Communications graduate of UP Cebu and two armed minors from Negros Oriental and Negros Occidental .”

Residents of the area belied the claim that an encounter happened between the Army and the NPA . The paraffin test conducted by the Negros Oriental Provincial Crime Laboratory also tested negative. “This is negating the argument of the prosecution that an encounter occurred and the sixth allegedly surrendered,” Ramos said.

“The Mabinay 6 opted to go and serve farmers communities in Negros Oriental organized by Kaugmaon-KMP. Community Development work is now labeled as terrorists work.That’s why they use the military institution to go after community development workers such as Myles Albasin and 5 others,” she added.

“The case of Myles Albasin is used as an example by the military and the landlord so that the youth could no longer emulate,” Sanchez said.

The Karapatan has joined family members in a protest demanding the immediate release of the Mabinay 6.

On the other hand Atty.Benjamin Ramos, who is also secretary of the National Union of Peoples Lawyers is now facing harassment, with his photo shown and captioned as one of the 60 “alleged Communist Party of the Philippines, NPA and NDFP personalities” poster circulating for two weeks in Moises Padilla, Negros Occidental.

The said poster was ordered by the provincial police of Moises Padilla, Negros Occidental.