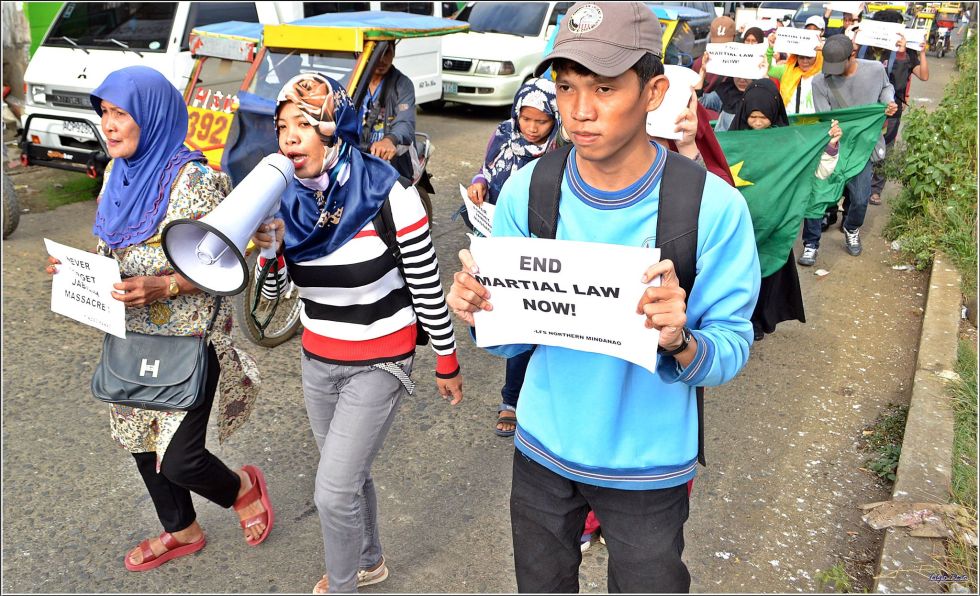 DAVAO CITY, Philippines – For the first time since the crisis in Marawi started in May last year, displaced Meranaw staged a protest inside the war-torn city of Marawi on Sunday, March 18, to condemn the construction of military camp and continuing harassment of civilians allegedly by the army.

In time for the 50th year anniversary of the Jabidah Massacre, Tindeg Ranao, an organization of displaced Marawi residents and students from the League of Filipino Students (LFS) – Marawi City Chapter held a protest at the Commercial Center inside the Mindanao State University campus in Marawi City Sunday afternoon.

Ibrahim cited the recent incident which members of the 55th Infantry Battalion of the Philippine Army “disrupted” the Jumaat or Friday congregation prayer of some residents in a mosque at Bacolod-Kalawi town in Lanao del Sur last March 16.

“The military frisked and even told male residents to take their clothes off to check if they were carrying arms. During prayer, the military cordoned the mosque based on intelligence tip that people were massing up in the mosque,” said Ibrahim.

The Army’s 55th IB in a statement said the operation was just to ” ensure the security and safety of all civilians,” saying they were responding to reports that unidentified armed men were headed to the mosque.

The Moro leader also urged the government to end the implementation of martial law in Mindanao as it ” only aggravates” the situation of the displaced Meranaw in Marawi.

“President Duterte should lift Martial Law extension in Mindanao for it only empowered more the military to commit abuses against the Moro people and threatens to victims of human rights violations to speak out against these abuses,” said Ibrahim.

Ibrahim said that “while the military refused the displaced residents to go back to their original homes in Marawi City, the local governments in Iligan City and neighboring towns are forcing them out of the evacuation centers.”

During the groundbreaking ceremonies of the planned military camp at the old Marawi City Hall last January 30, President Rodrigo Duterte announced that the government will pay the landowners who will be booted out due to the construction of the military camp.

“I am going to set a camp here but I will pay you. This is a military reservation pero may mga may-ari naman ng lupa. O sige na lang, kung anong makukuha nila di bayaran na lang” (but some claim ownership of the lands here. It’s okay, we will just pay for it), Duterte said.

Tindeg Ranao performed the Salahatol Gaib or prayer for the dead during the program for some families who are still looking for their missing kin, not knowing if they are still alive or not.

LFS-Marawi in a statement said they staged the protest to mark the Jabidah massacre anniversary which reminds them of how “insignificant the life of the Moro people are for the Philippine government.”

The Jabidah massacre was the mass murder of Moro soldiers who were being secretly trained as a special commando unit called “Jabidah” in Corregidor, Bataan as part of then President Marcos’ Operation Merdeka to take back Sabah from Malaysia. But members of the Jabidah was murdered by soldiers to cover up the leaked plan on March 18, 1968.

The group related the infamous massacre with the Marawi crisis saying the “discrimination” against the Moro people continues at present.

“With the bombing of Marawi City and the various rights violations suffered by the Meranaw IDPs due to the declaration of Martial Law last year, the Moro students felt that government discrimination continue despite a Mindanaoan leader that ordered military aerial bombardment of Marawi City under the pretext of capturing international terrorists and blaming the Meranaws for letting them inside Marawi City,” it added. (davaotoday.com)