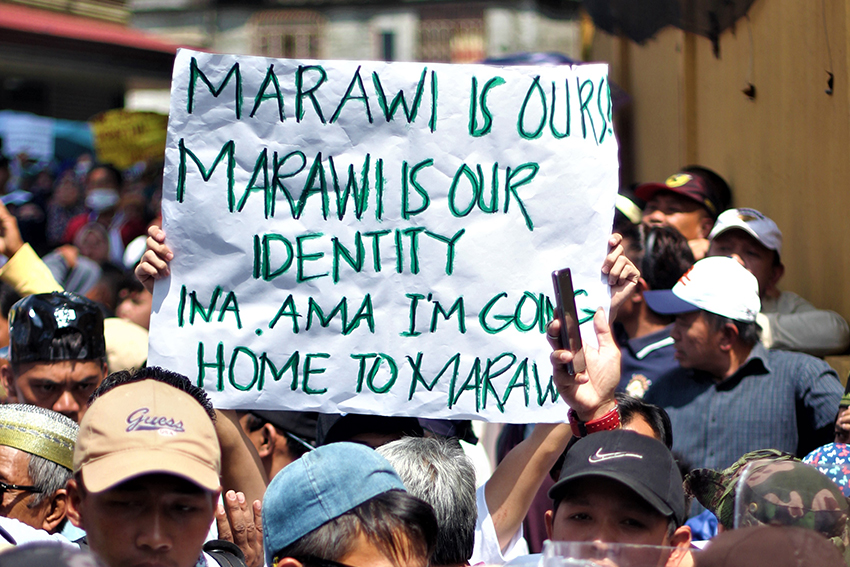 Thousands of Meranaw residents in Marawi City stage a symbolic protest to condemn the slow-paced government rehabilitation of their homes ravaged by war on Friday, March 30, 2018. (Kath M. Cortez/davaotoday.com)

DAVAO CITY, Philippines — A year after the City of Marawi was ruined by war, displaced residents continued to lament over their plight.

At the height of government’s P678-billion proposed rehabilitation to provide a roadmap for the immediate rebuilding of Marawi City, many of its residents have felt being forgotten as they were disregarded during the significant deliberations aimed to re-establish the Islamic City.

When the process was commenced to plan out the restoration of Marawi City, the majority of the internally displaced Meranaws were left out and were not consulted that resulted to the formulation of a rehabilitation program that is not sensitive to the culture of the residents, noted Professor Dalomabi Bula of Mindanao State University (MSU).

“We were forgotten by authorities and our own leaders. They presented a rehabilitation (plan) but none of it is for our own people,” said Prof. Bula

In the proposed rehabilitation program, an allocation of P11 billion is intended for the immediate repair and rehabilitation of major roads, bridges, schools, and other government buildings for the next six to 12 months while a P37-billion fund will be allocated to build more roads and other structures in a span of one to three years. The implementation of these projects will start in 2022.

Most of the P630-billion budget will cover long-term projects, to include the P30-billion billion Picong Industrial Estate Freeport and Philippine Haj Airport in Lanao del Sur province; the P20-billion Tawi-Tawi Special Economic Zone and Freeport; agricultural ecozones with an allocation of P5 billion; and the P400-billion Mindanao railway project.

Other priorities include the said 10-hectare military camp worth P400 million in Barangay Kapataran that President Rodrigo Duterte said: “will serve as the headquarters of the Philippine Army’s infantry battalion covering the area, and its military officials.” 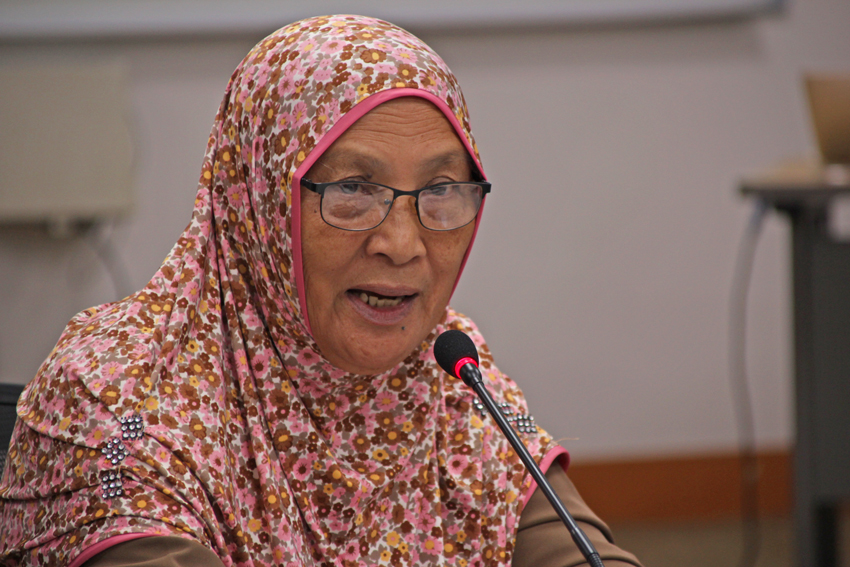 Mindanao State University Professor Dalomabi Bula during a talk dubbed as Revisiting Marawi from the Lens of Interfaith Dialogue and Multiculturalism at Ateneo de Davao University on May 19, 2018. (Kath M. Cortez/davaotoday.com)

Prof. Bula said more or less 80 percent of the residents from ground zero are home-based evacuees that continue to experience neglect from the regular support of the government. Since the war started, they were forced to abandon their homes and were only given relief assistance three times until December last year.

“Most of our relief came from private organizations that helped us a lot to survive,” Bula added.

In many home-based evacuation centers in Iligan City, similar faces of struggle continue to haunt displaced Meranaws, particularly the enduring poverty brought about by the futile government support.

Yusof Bonsalagan, head of a family from Barangay Datu Sabir Labas, an area situated in the so-called ground zero now stays with wife and children in a Madrasah school in Merial Ubaldo Laya.

Bonsalagan cried over difficulties and complications his family is going through inside their temporary shelter.

Lately, his one-year-old son was diagnosed with a heart disease, a condition that would require around P8,000 per month medication. 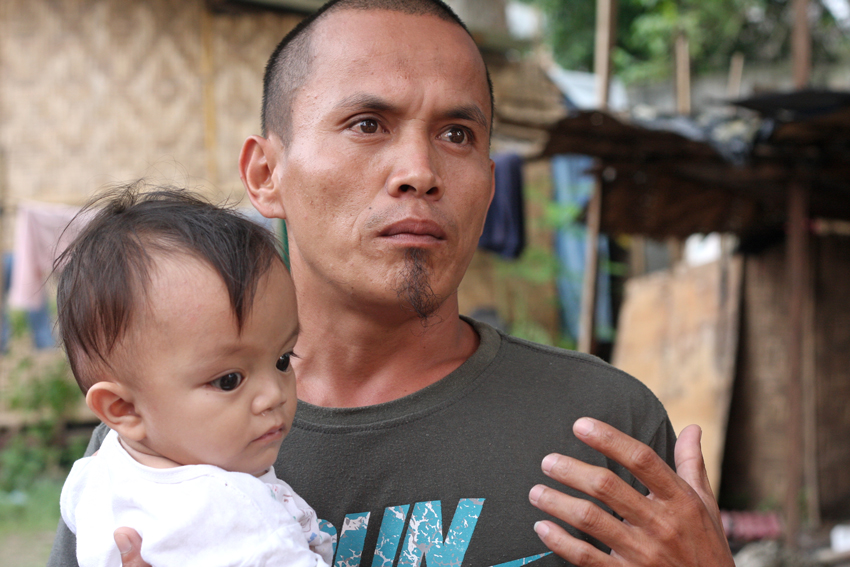 Yusof Bonsalagan with his one-year-old child turns emotional as he shares his experiences as an evacuee. (Kath M. Cortez/davaotoday.com)

The amount excludes payments for other medical tests that a doctor advised to be done regularly.

But due to poverty, he can’t even buy some nutritious meals for his son. Such conditions made Bonsalagan break down and cried.

As he whined, Bonsalagan uttered these words during the interview: “How can I provide for my family? I am just a laborer in Marawi and here in Iligan, they don’t hire us.”

Ampaso was an overseas Filipino worker who just went home days before the war started on May 23 last year.

All of his savings have vanished while the house he built for his family was completely destroyed when the war broke out.

Ampaso and the six members of his family are now taking refuge in a shanty built by a private organization inside a Maradasah compound.

He also complained that no company or other business establishments in Iligan City would hire him for work, despite that fact that he is a college graduate.

Ampaso said establishment owners are wary and suspicious that he might be a member of ISIS (Islamic State of Iraq and Syria). 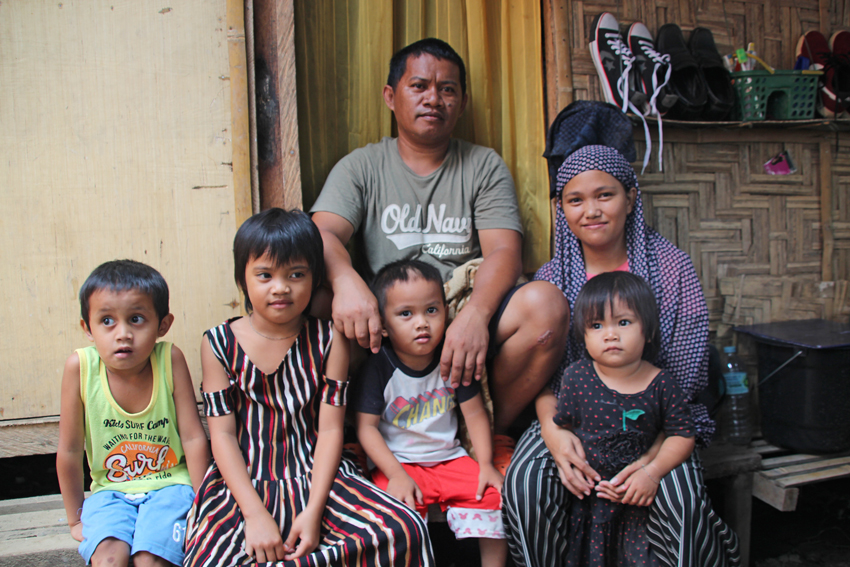 Jabar Ansi Ampaso with his wife and four children pose for a family picture in a shanty they built inside a Madrasah compound in Marawi City. (Kath M. Cortez/davaotoday.com)

Finding a job would somehow ease the hardships they presently undergo and could provide support to the other needs of his children.

“Masakit sa akin na kahit piso ay di ko mabigay sa anak. Napapalo ko pa dahil umiiyak sa gutom (It’s painful to realize I could not even give one peso to my children. There are times I hurt them especially when they continue to cry due to hunger),” he admitted.

Bonsalagan and Ampaso’s case are all similar in many other home-based evacuation centers. They are still waiting when they will be allowed to return home. They also continue to lie in wait for the support promised to them by the government.

In December last year, Bangon Marawi, a government inter-agency task force organized to facilitate the rehabilitation, recovery and reconstruction efforts in Marawi stopped its support to the evacuees living in home-based evacuation centers. The stoppage was implemented despite the fact that home-based evacuees only received three times of support from the task force since May 2017, including the payment of their electric and water bills.

“President Duterte had already visited Marawi City several times but his government did not reach out to the affected residents to determine their needs and aspirations,” Prof. Bula noted.

In fact, she added, the recent visit of the President “only prioritized the military over the civilians who are into a miserable situation.”

Lately, the Ranaw Multi-sectoral Movement, an organization of Marawi residents urged President Duterte to allow the residents to participate and lead in the rehabilitation of their homes and the entire city.

The group also made the following calls:

1. To conduct a transparent and acceptable post-conflict damage assessment of private properties caused by the deliberate and excessive bombings during the war;

2. The immediate enactment of a reparation and compensation bill in Congress endorsed by the President as an urgent bill;

3. To provide a comprehensive, cultural and religiously sensitive recovery and rehabilitation plan in the ground zero areas. The plan shall clearly identify the spaces and spots where public facilities and utilities will be constructed to assure the displaced resident of the protection of their lands and lots;

4. To keep the Kapantaran Hill a historical site and develop the area as an icon of peace park for Meranaws and tourist, instead of converting the same into a new military camp;

5. To immediately clear the debris of war;

6. To provide concrete government policies for the provisions of humanitarian assistance and livelihood programs for displaced residents until the completion of the rehabilitation program. (davaotoday.com)