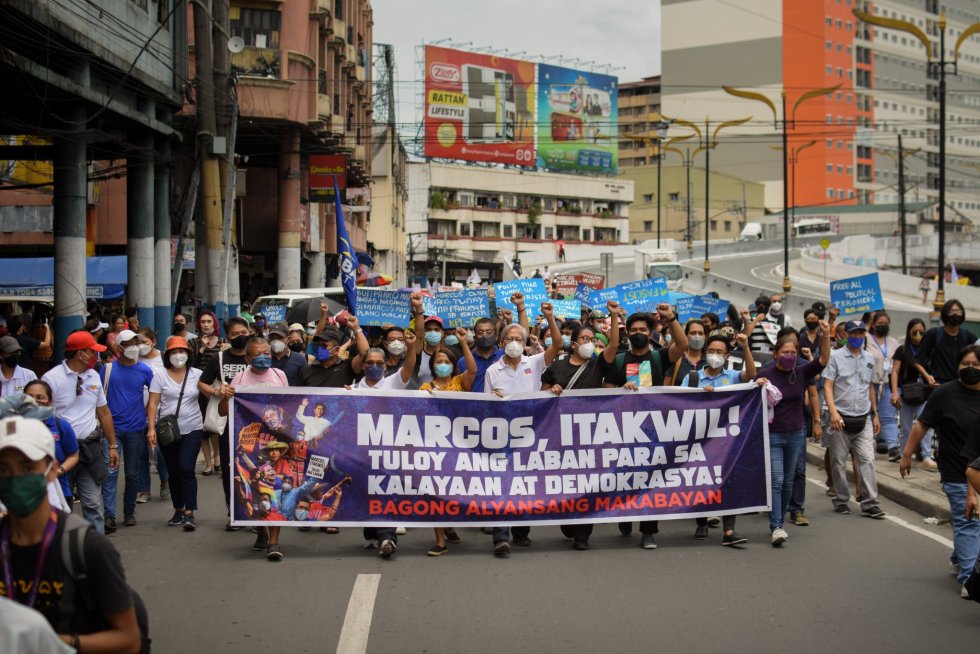 Progressive groups held a protest at the Plaza Miranda in Manila as Ferdinand Marcos Jr., the son and namesake of the Philippines’ late dictator, took his oath as the country’s new president on Thursday, June 30, 2022. (Photo by Carlo Manalansan/Bulatlat)

CAGAYAN DE ORO CITY, Philippines — President Ferdinand Marcos Jr. was sworn in Thursday of June 30 after clearing all disqualifications filed against him at the Comelec and Supreme Court, but survivors of his late father’s dictatorship will continue to question his presidency.

The group Campaign Against the Return of the Marcoses and Martial Law (CARMMA) issued this statement as they joined groups in a rally in Plaza Miranda to express their stand on the new Marcos administration.

The Supreme Court on June 28 Tuesday rejected petitions to disqualify Marcos Jr from last month’s election, clearing the way for his oath-taking.

The SC voted 13-0 on appeals filed by CARMMA and other groups challenging the Comelec’s junking of their petitions to disqualify Marcos Jr for tax violations for decades.

With Marcos Jr. clearing ‘legal obstacles’ to his presidency, CARMMA said they continue to question his legitimacy.

“We are not, however, surprised that the high court has opted to swim with the tide of acquiescence to a Marcos rehabilitation. The question remains: is it not a legal or moral issue for a citizen who fails to file his income tax return, especially government officials and those running for office?” the group said in their statement on Wednesday.

The group questioned how the SC decided that Marcos Jr. did not violate the law for not paying the estate taxes of his late father worth P 203 billion, which they said is a question of moral turpitude.

“We reiterate that this is not merely a legal issue. It is a moral and historical issue. By this SC ruling, the people just lost a battle for truth and justice, allowing a proven tax evader and therefore, a convicted criminal, rule the land,” it added.

CARMMA was organized in 2016, when Marcos Jr. ran for the vice presidency, and the group raised awareness on the legacy of his late father who jailed and tortured thousands and killed hundreds of activists during Martial Law from 1972 to 1986.

The group continued to oppose the Marcos family, who has slowly restored its power and popularity after their return in 1992 through social media and its alliance with President Rodrigo Duterte.

“He may have 31 million votes but that doesn’t mean that he is a legitimate president. For us in CARMMA (Campaign Against the Return of the Marcoses and Martial Law) the pain inflicted in the past is the reason for our resistance,” Bonifacio Ilagan, one of the converners of CARMMA, told alternative news media Bulatlat in an interview.

“Amid all the historical distortions and false narratives, the late dictator’s son continues to delude the people with grand promises of economic recovery and low prices of goods especially rice,” the group said.

“But we hold the Marcoses accountable for the plunder, corruption, human rights abuses and other forms of social injustice in their 21 years in power, most of which were under authoritarian rule. They can never clear up their name, long-tainted with corruption, abuse of power, martial law atrocities, and tyranny. We do not expect the reign of Marcos II will be different,” it added.

“As we join the protests marking Marcos Jr assumption to the Office of the President, we make our oath to continue to fight for accountability, justice and truth,” CARMMA said. (davaotoday.com)