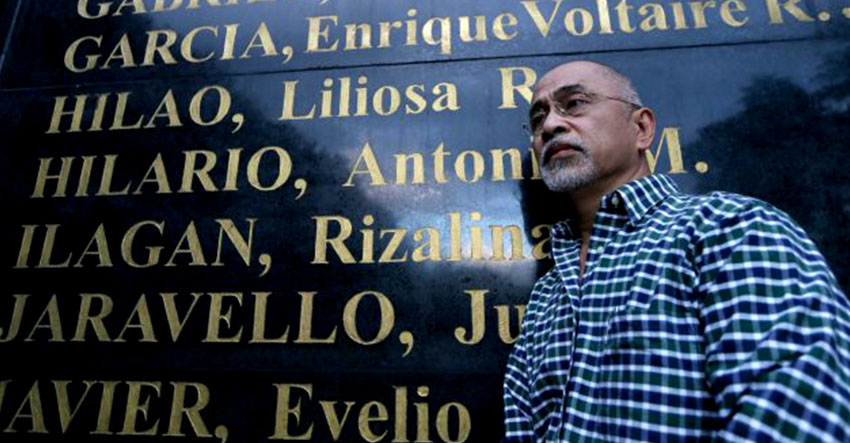 Bonifacio Ilagan, of the Campaign Against the Return of the Marcoses to Malacañang (Carmma) (photo from Selda Pilipinas)

DAVAO CITY – Even during the campaign period, President-elect Rodrigo Duterte has been consistent with his stance on allowing the burial of former dictator President Ferdinand Marcos, Sr. at the Libingan ng mga Bayani (Heroes’ Cemetery) believing that this will unite the divided nation.

On Monday night, May 23, Duterte reiterated that he will allow the burial of Marcos, Sr. at the national cemetery in Western Bicutan, Taguig City to “erase” the hatred the country.

He said the issue on whether to allow Marcos, Sr to be buried has created a division among the Filipino people and hurt some, especially the Ilocanos.

During the presidential town hall debate a month ago, Duterte has already made the same remark.

“Yes, definitely yes, because it has divided the country until now. Halos lahat ng Ilocano galit kung bakit ganun ang nangyari (Almost all the Ilocanos are angry because of what happened). It’s time to heal,” Duterte said when asked if he would allow the burial of Marcos at the Libingan ng mga Bayani on April 24.

Duterte said the its up to the Marcos family when they prefer to bury the former dictator. “They can arrange it immediately,” he added.

However, a group of Martial Law victims is now pleading to Duterte to reconsider his position.

“Aming ipinapakiusap to President-elect Duterte to reconsider the allowing the burial of Ferdinand Marcos Sr sa Libingan ng mga Bayani,” said Bonifacio Ilagan, of  the Campaign Against the Return of the Marcoses to Malacañang (Carmma) in a phone interview Tuesday, May 24.

Ilagan said Marcos does not qualify in any way “even if he was a former soldier”.

“First, anyway you look at it, he is not qualified. He is not a hero and even if they say he was a soldier, he faked his medals. So, in a big way he dishonored the honorable at the Libingan ng mga Bayani,” Ilagan said.

Marcos served as an officer of the Philippine armed forces during World War II. However, Ilagan said the documentation on Marcos’ faked medals made by the late army official, Col. Bonifacio Guillego  “was not effectively rebutted by the Marcos camp.”

He also said if the plan will push through “historical revisionism will be justified” and fears that there will be “white washing of his crime”.

“In all humility and we would like to underscore it, the victims of Martial Law are not moved by hatred. They are moved by the pursuit of justice,” said Ilagan.

Meanwhile, Ilagan said they agree with Duterte that the country needs to unite. But he said that unity should havea strong foundation.

“We can only achieve a long lasting and genuine unity if unity is based on justice and granting justice to those who were deprived of it,” he said. (davaotoday.com)