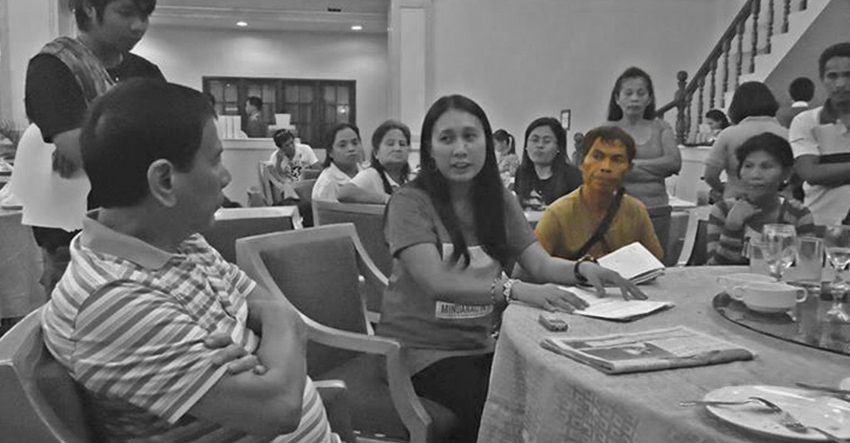 DAVAO CITY – The house where a tribal leader and two others were allegedly killed by Army troops in Paquibato District Saturday midnight hosted a birthday party, said a human rights group.

“Things were merry when all of a sudden elements of the 69th IB (Infantry Battalion) arrived. Moments later, the jovial atmosphere was replaced by the smell of gunpowder, when the military fired at them,” said Suazo in a press release Monday.

“That was probably the worst thing she received for her birthday, and for all her birthdays to come,” said Suazo.

Seisa appeared before a press conference last April to report the alleged attempt of armed men to enter the Karapatan office where they sought asylum.

Seisa also made a testimony before the Davao City Council the same month and alleged that Army troops coerced them into admitting they are members of the New People’s Army.

Seisa also said the Army filed “trumped-up” cases against them.

The Army denied the accusations and said the recent incident which killed Enlog and two others happened because they “were fired upon by NPA bandit group.”

Lieutenant Colonel Rodney Intal, commander of the Army’s 69th IB, said that they “acted on the report from the local residents of the presence of armed group on extortion activities in the area.”

Intal said “there were wounded NPA members who ran to escape (as) reported by local residents.”

“I will wait for the final report,” said Duterte.

Duterte hosted several dialogues with the Army higher-ups and peasant and indigenous people’s organizations, but have failed to stop the incidents in the area.

Farmers condemned the ‘massacre’ in a protest Monday afternoon.(davaotoday.com)