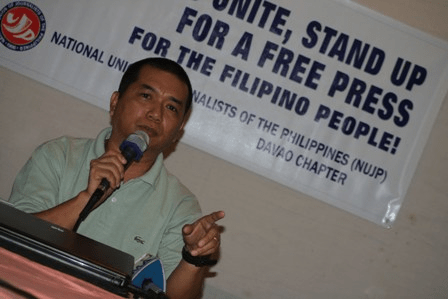 Dodong Solis during the presscon following his termination from RMN Davao in 2010. (FILE PHOTO)

Solis was accordingly rushed to a hospital on Monday night but was declared dead at 2am Tuesday. News of his death was spread on social media since Tuesday but his family has yet to release a statement.

Dodong Solis, whose full name is Mario Maximo Solis Jr, was 58. He was born in November 18, 1961 and grew up in Kapalong, Davao del Norte.

Solis studied at the University of Mindanao where he had first stint in radio as a student intern for DXUM AM, the station ran by the University’s owner. He later became a reporter for DXRH, the Davao station of DZRH, in the early 1980s.

After a stint with the local ABS-CBN radio station DXAB that ended in a labor dispute, Solis joined Radio Mindanao Network (RMN) DXCDC 621 AM, and later became its station manager in the late 1990s.

It was in RMN where his morning program “Straight to the Point” became one of the most listened commentaries by the Davao region public. Listeners tuned in to Solis delivering commentaries in a less acerbic, but more calculated style, airing public sentiments on corruption, abuses of the military and in effect champion people’s rights.

His program was popular that he would spend half of his show reading a barrage of text messages from listeners reacting to his commentaries.

Solis’ carried this same principle of concern for the people by working for the welfare of his reporters and staff as RMN station manager, where he opened his office for lunch sessions, and also provided food rations and carpool to them.

Later, Solis became one of the key figures in the Davao chapter of the revived National Union of Journalists of the Philippines (NUJP) starting in 2003 as he contributed time and resources in handling cases of attacks on journalists in Davao Region.

His stance in progressive journalism and on political issues, however, caused friction with the RMN owners, who suspended Solis and later terminated his work for the company in 2010, an issue that rocked the Davao media community.

Solis filed a labor case against RMN which he won but the case was raised to the Court of Appeals.

RMN reporters and staff showed solidarity to their former station manager, as some got fired and others voluntarily left to join Solis in his next venture in broadcasting.

In 2012, Solis’ group was joined by other reporters in forming Radyo ni Juan, which they ran as an independent outfit from big corporations. It was one of the first FM news radio stations in Davao City, a new format of blending news and entertainment throughout the day.

Solis anchored the morning programs of Radyo ni Juan, “Maayong Buntag Pilipinas” and “Juan on One” which he later opened the booth for fellow broadcasters to helm the program. He also hosted the program “Lungsod, Ikaw ang Maghukom”.

Running an independent radio group was a challenging effort to Solis and the staff. This year the station’s management announced it will close the station due to losses aggravated by the pandemic. But the staff of the Davao City station asserted to continue its broadcast.

In the few days before his death, Solis was reportedly still handling the station but was already feeling ill.

Solis’s death comes as a shock to the media community in Davao, and to the many sectors that had worked or guested in his program.

He leaves a legacy of solid journalism, touched by his pro-people stand on all matters. (davaotoday.com)