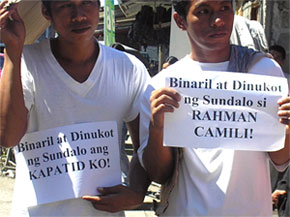 WHERE’S OUR BROTHER? Relatives of Rahman Camili, the Moro who was shot and abducted — allegedly by military agents — last week in Tagum City, held a demonstration on Wednesday outside Camp Panacan, the military headquarters in Davao City, to demand his release. The human-rights group Karapatan said Camili’s family received information that he was being held inside the camp. The military has denied this but Camili’s relatives said the military was behind his first abduction in 2003 and, according to Karapatan, they have reason to believe that the same is true in his recent disappearance. Camili’s family said it is preparing legal action against the military. Camili, a member of the Moro party-list group Suara Bangsamoro, has been accused of terrorist activities, a charge his family denies. (Contributed photo)