Mindanao Lumad struggle for empowerment through education (Part 1 of 4)

DAVAO CITY, Philippines (UPDATED) — In the compound of the United Church of Christ in the Philippines in Davao City, lies the evacuation center and makeshift classrooms for the Talaingod Manobo who have stayed there over the past five years.

Their newly installed chieftain, Datu Ginom Andil, closely observes the children as they start their lessons led by volunteer teachers who joined them in the camp.

Analyn and Arlene are Grade 5 students of the Salugpongan Community Learning School, which Andil and his fellow chieftains built. They have stayed in the evacuation center for over a year. While these young girls dream of becoming teachers, their spirits turned bleak when their Salugpongan campuses in Agusan del Sur and Talaingod were forcibly closed last year due to militarization.

“I want to go back to our school because it is near our home. I did not encounter any problems with my schooling since we are provided with school supplies and food. The teachers encouraged us to continue farming in our community to help in our needs. Along with my classmates,we are taught how to do Science, Math and Filipino,” Analyn said.

Home is where their own community schools, named after the organization of Talaingod chieftains, Salugpongan Ta Tanu Igkanogon (Unity in Defense of Ancestral Domain), is located: in interior rural towns over 110 kilometers north of Davao City.

Andil recalls how they started their own community school more than a decade ago in Talaingod, hoping to provide the young generation with a greater understanding of their culture and identity, and thus strengthen their resolve to protect their ancestral land. 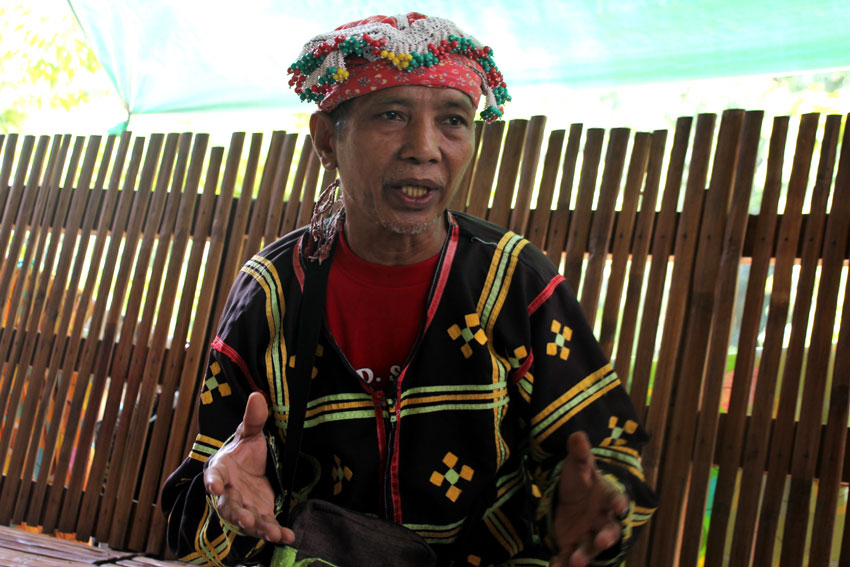 The pioneering Salugpongan Ta Tanu Igkanogon Learning Center, which was accredited by the Department of Education in 2007, drew praise for helping Manobo children study without having to walk long distances away from home. They learn of their cultural identity through the mother tongue, and the school provides a natural environment as their teaching aid.

“Our ancestral domain is our life. We do not want our ancestral domain to be used by big businessmen that destroy the forest and water systems. As Lumad (the collective term of the Mindanao indigenous peoples), we also have the right. Therefore, we pursued the task of setting up our own schools,” Andil said.

For the past 12 years, as a result of this free education, the school has produced students committed to preserving the natural resources of their ancestral land, and also in helping their fellow Lumad by working as teachers, agriculturists or health workers.

This approach in education proved its effectivity, as Salugpongan expanded to 54 school campuses from Talaingod to the different far-flung municipalities of the Southern Mindanao region; providing a convenient option for Manobo and other tribal children who had been essentially shut out from mainstream education.

But the Salugpongan Community Learning Center is facing a debacle as it is ordered closed by the Department of Education, citing claims from the military that the school is teaching “violent ideology” against the government.

This presents a contradiction between the government’s goal to fight illiteracy among the indigenous people but at the same time discourage the latter’s initiatives to establish community-based education.

There are 14 million indigenous peoples in the Philippines, making up about 11% of the country’s population. Almost 60% of them are in Mindanao, comprising 18 ethnolinguistic tribes that are collectively known as Lumad, which literally means “native to the place”.

Lying beneath the ancestral lands of the Lumad are vast untapped mineral reserves reportedly valued at $1 trillion. Davao del Norte lies adjacent to the Eastern Mineral Belt, a term used by the Mines and Geosciences Bureau to refer to the eastern provinces of Mindanao which have rich deposits of gold, copper and nickel. Also, the entire island of Mindanao is an agricultural area and considered the country’s food basket,.

These untapped resources notwithstanding, the Lumad population remains deep in poverty. The remoteness of their villages, unproductive crude agriculture practices and prohibitive costs in transporting goods and inaccessibility of their areas have hindered delivery of government services, including education.

The Philippine government has passed the Indigenous Peoples’ Rights Act (IPRA) in 1997 and it has signed the United Nations Declaration on the Rights of Indigenous Peoples (UNDRIP). Both statutes call for the government to bear responsibility to uphold the rights of the indigenous peoples, including the right to education.

However, many indigenous communities do not have schools. The children and their parents also complain of the perils and high cost of travelling over hills and rivers to go to public schools, and sometimes they experience discrimination from non-Lumad schoolmates.

One out of three indigenous children entering primary school will most likely drop out and fail to graduate, according to the 2014 research conducted by EED-TFIP Evangelischer Entwicklungsdienst e. V of Germany- Philippine Partners Task Force for Indigenous Peoples Rights. The study was conducted in eight indigenous communities across the country.

The chance of these children to reach secondary school level is only around 27 per cent and completing it, a mere 11 percent. College education appears out of reach for most of them, with just about a 6 percent chance. Graduating from college would indeed be an achievement, with only 2 percent of the population having the chance to do so.

DO 62 states: “Recognizing education as a necessary means to realize other human rights and fundamental freedoms, the DepEd urges the strengthening of its policy on IP education and develop and implement an IP Education Program. This Program subscribes to the rights-based approach which gives primary importance to the principles of participation, inclusion, and empowerment.”

The order recognizes that indigenous communities lack access to social services, limited opportunities to engage in mainstream economy, and suffer from socio-economic and political exclusions. It also cited the lack of access to culture-responsive basic education to the current situation of IP learners.

The head of Davao Region’s Indigenous Peoples Education (IPED) program, Dr. Manuel Vallejo, said that the basic component of the program is making the curriculum culturally responsive to the specific needs of indigenous learners. The contextualization of the curriculum is a design under the K to 12 program, done with the participation of the tribal elders and leaders.

“The ancestral domain serves as the classroom. What they see and experience within their community function as visual aids,” Vallejo said.

Using the mother tongue or the language of the tribe as a medium of instruction provides a direct response and easy learning among the Lumad children. Vallejo said that in the past, indigenous students had difficulty learning due to limited exposure to English and Filipino. Now with the use of the mother tongue, learners are able to understand, relate, interact and engage with fellow students and teachers.

Challenges of IPED in public schools

In Davao Region, all schools serving IP learners are mandated to conduct activities like the Panaghiusa Festival, which highlights indigenous knowledge and practices geared to help indigenous schoolchildren to embrace their Lumad identity and recognize their cultural heritage.

In schools with a predominantly large population of indigenous learners, indigenization is done with the presence of community elders helping in the conduct of classroom discussions. 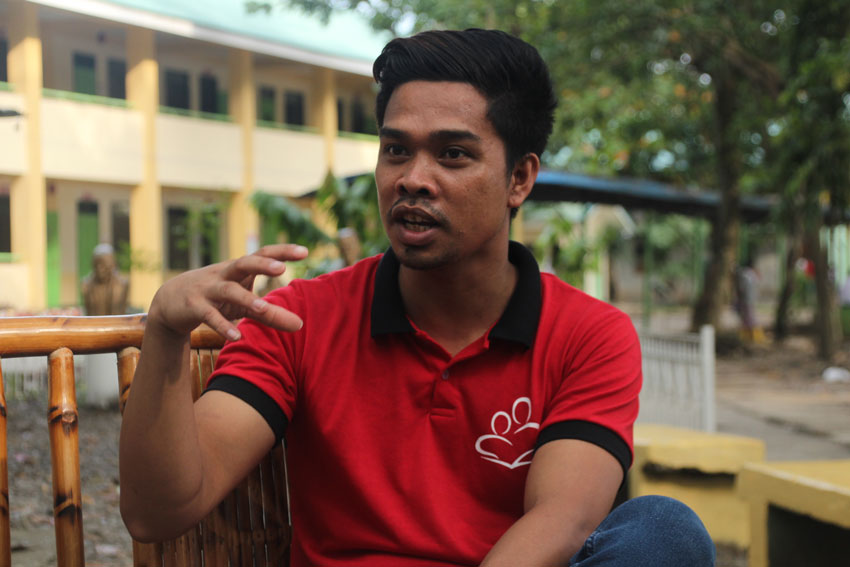 “In a mainstream society like today, indigenous students faced discrimination. We have this organization, Pumunan, an Obu Manobo term that means “beginning”. This ensures that students in this school are conscious in knowing and looking back on their Lumad roots and culture,” said Roy Bayon the indigenous peoples’ coordinator of the Davao City National High School.

Raul Cabilogan, the principal of Marilog National High School, pointed out that the low economic status of Lumads contributes to the high drop-out rates among the Lumad youth. Some cannot pursue further studies to work and others get married at an early age.

“During the time where Deped schools are not accessible, a student has to ride a motorcycle with a P500-1000 fare going to school. That is the reason behind the creation of extension schools in far flung areas. Marilog National High School oversees 13 extension schools,” Cabilogan said.

Cabilogan does note that there are Lumad students who are lagging behind their subjects. He noted that this a case of adjusting to a much higher subject volume when transferred to a secondary public school. Entering into class with an empty stomach is another factor. (davaotoday.com)