Mindanao Lumad struggle for empowerment through education (Part 4 of 4)

DAVAO CITY, Philippines (UPDATED) — There are various indigenous education programs all around the world that are being tested for applicability to help indigenous peoples to engage with the problems they are facing regarding their land and heritage.

Indigenous education initiatives are today established in over 20 Latin American countries, in Canada, United States, Australia and New Zealand, Norway, and in Indonesia.

The current Indonesian indigenous education movement is a relatively recent development, with the number of indigenous schools growing from just a handful in early 2015 to over 40 at the end of 2018.

These include community initiatives such as: Literasi Halmahera, in North Maluku 2008, Sekolah Rakyat Bowonglangi in Pattallassang, South Sulawesi, set up in March 2010, Om Eli’s Sekolah Kewang and others.

Other educational initiatives have been organized by non-government organizations like Pondok Belajar Orang Rimba by KKI Warsi in Jambi; Sokola – an organization which provides “education for remote Indigenous peoples who are unable to access formal education due to geographic and cultural obstacles”17; and Sekolah Hutan (forest school), a group of 4 primary schools started by Yayasan Citra Mandiri Mentawai (YCMM) in villages of the Mentawai indigenous peoples.

The Intercultural Bilingual Education or EIB from Latin America (from the Spanish educación bilingüe intercultural) is an educational approach designed for areas where two or more cultures and languages (usually a dominant and a minority culture) are in use. Together with popular education, EIB has been one of the most important developments in Latin American education, specifically with regards to education for indigenous peoples.

EIB has transformed education for indigenous peoples in schools and universities in almost 20 countries across Latin America.

“A good education should equip people to meaningfully participate in building a better nation-and this is something that has been denied from the IP’s for a long time. They are subjected to the laws and expectations of the modern nation state, but they do not have the capacities to meaningfully engage with the state and other groups within it. And this has led to a loss of many of their resources,” she said.

Indigenous education continues to adapt to traditional forms in indigenous communities while also responding to the loss of indigenous knowledge brought about by colonization and globalization.

Such is the case in Talaingod, where the Manobos strive to inculcate the defense of the Pantaron mountain range, one of the last remaining “virgin” forests which is recognized by researchers including Ragragio as a biodiversity area of complex mountains with unique flora and fauna. It is also the headwater source of Davao and Pulangi River.

Talaingod continues to be threatened not only by militarization, but also by development projects including large-scale mining and construction of a public highway to facilitate tourism and other industries in the Davao-Bukidnon provinces.

Ragragio points out that a quality indigenous education should offer a good grasp of the specific histories and knowledge systems of various indigenous groups.

She said that it would be best if knowledgeable “culture bearers” such as epic chanters, are given space in the schools for them to share their knowledge.

“IP schools shall serve as a library of local histories, aspects of traditions through systematic gathering and archiving guided by good methodologies and ethical considerations,” she said.

Ragragio however said a limitation to such study is the situation where teachers in indigenous schools are not Lumad, or if there are of Lumad descent, have been assimilated to the dominant culture. “The spontaneous, non-critical ideas they might be bringing into their pedagogical practices, they might unintentionally repeat the errors of colonial education and pedagogy,” she said.

The challenge remains to have an indigenous education that is grounded on the needs of the community.

This challenge is internalized by Analyn Bay-ao, the first student from Talaingod to complete her college education through a scholarship from MISFI Academy. She now teaches a grade 5 class in Salugpongan. 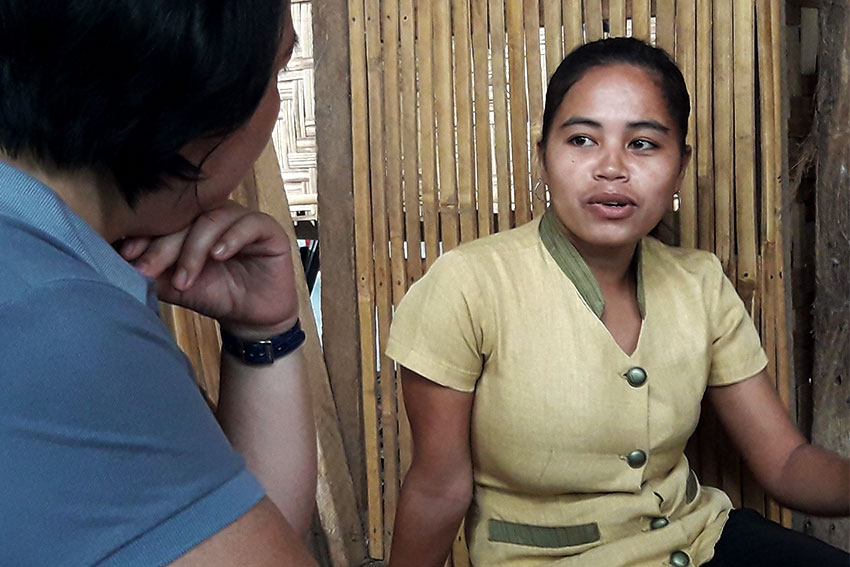 Bay-ao, like other Lumad youth who have undergone formal education, recognized how the lack of education of the elder Lumad made it easier for them to be duped by companies to sell their lands. She recalled when she was still in high school, a village chief in Sto. Niño signed a paper he could not read, which eventually led to his death.

She cited her own experience of facing discrimination for being a Lumad and being treated as a low-class citizen when she studied elementary and high school in Misulong, Talaingod.

She recalled teachers did not understand why at time she was absent because they do not have food and money in going to school.

“Now that I am a teacher in Salugpongan, I always see to it that my students value their being a Manobo and understand their difficulties. In my three years of teaching in Salugpongan, I have seen how my education has helped in the development of the community. For many years, no logging and mining company has entered Talaingod because of an educated community and a school built by the community,” she said.

“I pursued my education because members of my tribe cannot distinguish a letter and cannot count. IP education will not lead our tribe to deception because of the vested interests of a few,” Bay-ao added. (davaotoday.com)