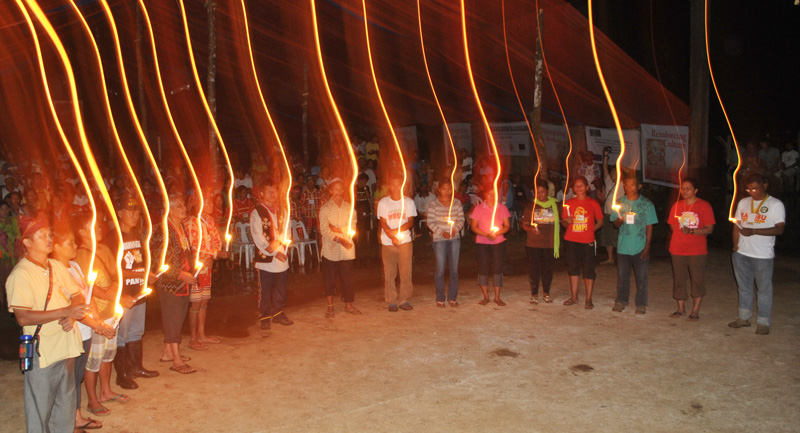 Mindanao Lumads pay tribute to their heroes and martyrs during the solidarity night of the second Kalumaran assembly, April 20 in Lianga, Surigao del Sur. (contributed photo)

“We should emulate the life of our lumad heroes who died in the struggle for defending the ancestral domain.” — Datu Monico Cayog, Kalumaran chairperson

This question raised by one of the delegates elicited reactions from the 300 participants who attended the second general assembly of Kalumaran, a federation of lumad organizations in Mindanao, held within the ancestral domain of the Manobo tribe in this town on April 19-20.

“Dili magmalampuson ang atong pakigbisog kung dili kita molihok (We cannot win our struggle if we will not act),” challenged Jomorito Guaynon, from the Higaonon tribe of Bukidnon province, during the assembly attended by Lumad elders, women, community leaders and children.

Dato Nilo of the Pulangi tribe from Bukidnon said letting fears overpower them is like abandoning the future generations.

Their points were not baseless.  For according to the reports gathered by Kalumaran, “military operations have intensified and wreaked havoc to Lumad communities” in the different regions of Mindanao.

In Southern Mindanao, for example, Norma Capuyan, Kalumaran’s Vice-chairperson, said “militarization” is widespread with the two divisions, three brigades and 18 battalions deployed by the AFP in the region.

Capuyan also alleged that government troops have served as private armies of large-scale mining companies and agri-business corporations and that the military has formed paramilitary groups and Bagani forces like the Task Force Gantangan in the provinces of South Cotabato, Sarangani, Davao del Sur and General Santos City.

“Contrary to the claim of AFP, there is no truth that Oplan Bayanihan brings peace and development to lumad communities.  The massacre of the Capion family in Kiblawan, the death of Barangay Kagawad Cristina Jose in Baganga and the death of Fr. Pops Tentorio in Arakan Valley are the cases of extrajudicial killings perpetrated by the AFP,” she said.

Meanwhile, the Pasaka Regional confederation of Lumad in Southern Mindanao, an affiliate of Kalumaran, lamented the existence of large-scale mining and agri-business plantations that “resulted to the massive displacement of lumads and peasants.”

The group has documented 110 mining companies, both small-scale and large-scale, in the provinces of Compostela Valley and Davao Oriental.  These companies are in the process of securing mining and tenement permits from Mines and Geoscience Bureau while others are already operating.

Pasaka said the encroachment of mining company Russel Mining Company, one of the biggest mining companies in the world, to the ancestral domain of the Mansaka tribe in Pantukan town, has “caused much damage to the environment.”

Thus, they reiterated their stand against the Mining Act of 1995.

“With this law, the lumads were given no right to their own ancestral lands.  It’s a clear manifestation that the Aquino administration, and even the past administrations, has no heart for the lumads,” said Genasque Enriquez of Kahugpongan sa mga Lumad sa Caraga.

Enriquez said the four provinces of Caraga region have been occupied by large-scale mining companies which resulted to the displacement of livelihood of lumad communities and the destruction of natural resources.

As of year 2012, there are 35 mining companies listed in the Caraga region.

The group has instead pushed for the People’s Mining Bill, which according to Enriquez, is “for the common good and within the framework of a nationally-industrialized Philippine mining industry.”

Meanwhile, Datu Monico Cayog, Kalumaran chairperson, said “we should emulate the life of our lumad heroes who died in the struggle for defending the ancestral domain.”  (Gilbert L. Pacificar/davaotoday.com)