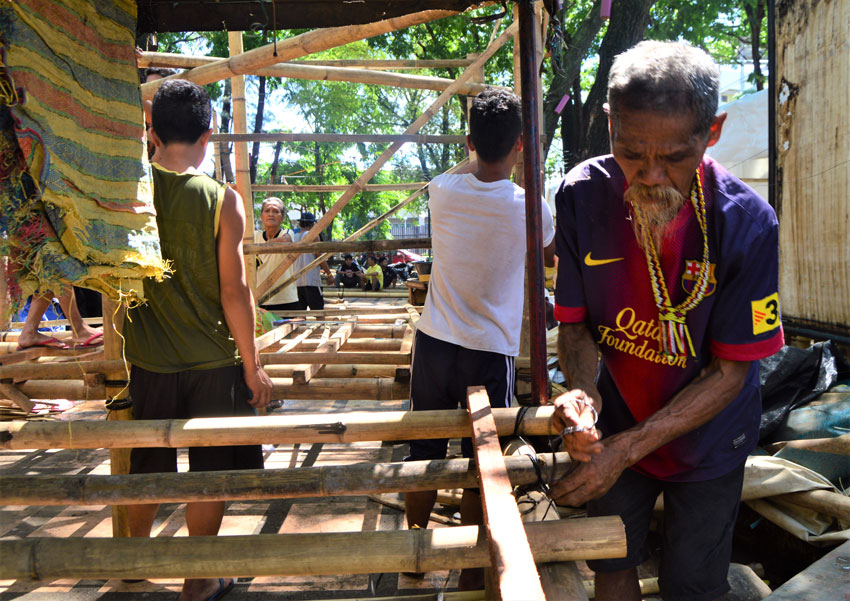 Tribal leader Reynaldo Ayuman (right) helps build structures at the De Lara Park, a part of the Misamis Oriental Provincial Capitol grounds along Velez St., Cagayan de Oro, Monday, June 17. The evacuees have been living at the park since last year after they fled their homes due to the fighting between the military and the Communist rebels in Sitio Camansi, Barangay Banglay, Lagonglong town, Misamis Oriental. (Jigger J. Jerusalem/davaotoday.com)

CAGAYAN DE ORO CITY, Philippines — Evacuees who are currently staying at the Misamis Oriental Provincial Capitol grounds have built temporary shelters Monday as the provincial government has threatened to demolish them.

The internally displaced persons (IDPs), who have been living at the Capitol grounds in tents since June 3, 2018, fled their homes for fear being caught in the gun battle between government soldiers and Communist rebels.

Datu Reynaldo Ayuman, leader of the dozens of families living on a portion of the De Lara Park, said they have no choice but to build makeshift huts to protect them from the heavy rains.

Ayuman said they also have no plans of returning to their homes in Sitio Camansi, Barangay Banglay, Lagonglong town, as long as there’s a military presence there.

Jonreboy Hilogon, one of the IDPs who has been helping in the building of the makeshift shelters, said they have to make elevated huts for their comfort.

The small houses are made of bamboo poles, coconut lumber, and canvass.

Hilogon said the housing materials were given to them by Accord, a nongovernmental organization.

No one from Accord has yet to confirm the assistance it has extended to the Lagonglong evacuees.

Provincial legal officer Neil Pacana said they will demolish the shelters as it was not what both parties have agreed on.

“That is already a structure, that is not a makeshift,” Pacana told reporters when he inspected the newly constructed shelters.

The lawyer said the agreement was that the IDPs were allowed to fix the canvass roofing and the flooring of their tents but not to build a structure.

He said Accord has coordinated with the provincial government in building temporary shelters for the evacuees, but was told they must build these in Lagonglong instead and not at the capitol park.

Pacana said the municipal government of Lagonglong has promised the IDPs of temporary shelters while Capitol will provide livelihood assistance for them.

He said they may have to order a demolition team to dismantle the huts, although at as of this writing the structures are still standing.

But Hilogon said they will only talk with Gov. Yevgeny Vincente Emano, but if the provincial government will demolish the shelters they have built, they will fight back.

“We will resist if they will demolish what we have built,” he said.

In a statement, the Movement Against Tyranny (MAT) has asked the governor to let the IDPs build the temporary shelters.

“With the upcoming rainy season, we ask that the Provincial Government allow the evacuees and their supporters to build structures to protect themselves from the elements. It is in these times that the officials of the province prove that they value the Lumad’s well-being than rules and protocols,” said Fr. Rolando Abejo, MAT-Northern Mindanao spokesperson.

Earlier, the provincial government has said they cannot facilitate the return of the evacuees to their community as it is the call of the military considering that Mindanao is still under martial law. (davaotoday.com)