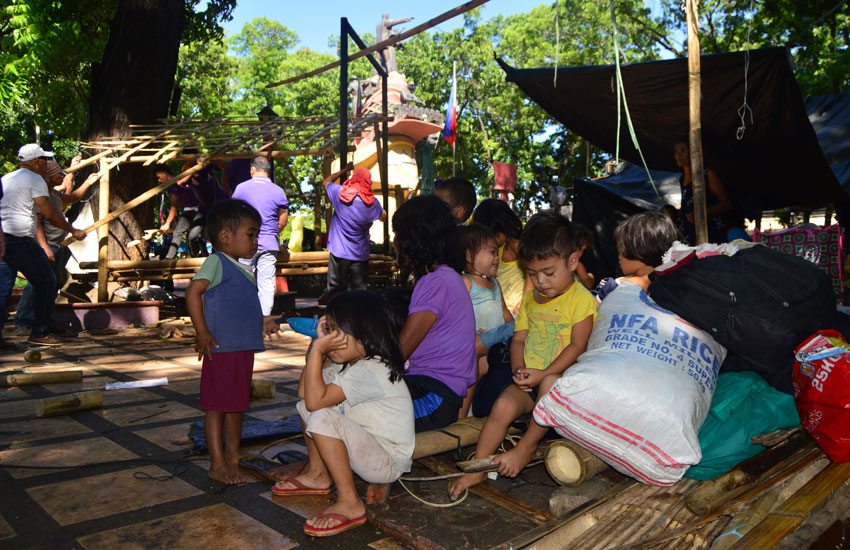 After more than a year of living in makeshift shelters, the evacuees from Sitio Camansi, barangay Banglay, Lagonglong town, Misamis Oriental, finally left the Misamis Oriental Provincial Capitol grounds Tuesday. A team from the provincial government removed and dismantled the tents and other structures erected by the evacuees. (Jigger J. Jerusalem/davaotoday.com)

CAGAYAN DE ORO CITY, Philippines — After more than a year of living in makeshift shelters, the evacuees from a mountain village in Misamis Oriental finally left the Provincial Capitol grounds when their tents were removed Tuesday, June 18.

The displaced residents left their homes in Sitio Camansi, Barangay Banglay in Lagonglong town on June 3, 2018, after government forces clashed with Maoist rebels near the area and settled at the De Lara Park within the Capitol compound.

The evacuees, belonging to the Higaonon tribe, said they fear the armed conflict might escalate and put them in a crossfire prompting them to flee their community.

Per data from the Provincial Social Welfare and Development Office, there were 30 families or 103 individuals that stayed at the park.

But the provincial government has decided to dismantle the shelters when the evacuees started building huts made of bamboo poles, coconut lumber, and canvass to replace the tents.

Datu Reynaldo Ayuman, the tribal leader of the internally displaced persons (IDPs), said they have to make some renovations to protect their families from the elements, especially during the rain.

Lawyer Cerillo Pacana, the provincial legal officer, blew his top at the IDPs when he found out that they were building bigger structures.

Pacana said the agreement he and the evacuees have come up with was for the IDPs to make some repairs on their shelters like the replacement of tent poles and bamboo slats on their beds.

“I was surprised when they were building those structures, which were no longer makeshift,” he said.

The building materials were donated by the nongovernmental organization Accord, but according to Pacana, the provincial government wanted these materials to be used for temporary shelters that was to be built in Lagonglong.

No one from Accord has yet to confirm their assistance to the evacuees.

Pacana said Lagonglong mayor Jack Puertas has promised to help the IDPs be resettled in Banglay but far from their community in Camansi.

At the proposed resettlement site in Banglay, temporary houses will be constructed for the evacuees, aside from the livelihood assistance that will be provided to them by the local government unit.

Ayuman said the IDPs are disappointed with Gov. Yevgeny Vincente Emano who assured them they could stay at the De Lara Park as long as the martial law in Mindanao is still in effect.

Emano, who was reported to be on leave, did not immediately a reply to Ayuman’s statement, although he was quoted as saying that the provincial government could not facilitate the evacuees’ return to Camansi since that decision can only be made by the military.

Rachel Hilogon, one of the internally displaced residents, said they are afraid to go back to their sitio because of the presence of the soldiers there.

She said the New People’s Army might engage the government troops stationed there in an armed confrontation that will put the lives of the civilians in danger.

Meanwhile, the indigenous people’s advocacy group Sandugo has criticized the Provincial Capitol for causing the evacuees to leave their temporary shelters at the park.

“Lumad evacuees built these makeshift homes to protect themselves from extreme heat and rain. Now that these are demolished, the children will be exposed to a harsh environment, especially this rainy season,” said Kerlan Fanagel, Sandugo council member in a statement Tuesday.

Fanagel said, “Where else will our indigenous brothers and sisters go to in times of crisis? The local government turned their backs. Not only did they neglect the indigenous peoples but even demolished our efforts to survive.”

At present, the IDPs have temporarily sought shelter at the United Church of Christ in the Philippines compound, a few meters from the De Lara Park. (davaotoday.com)