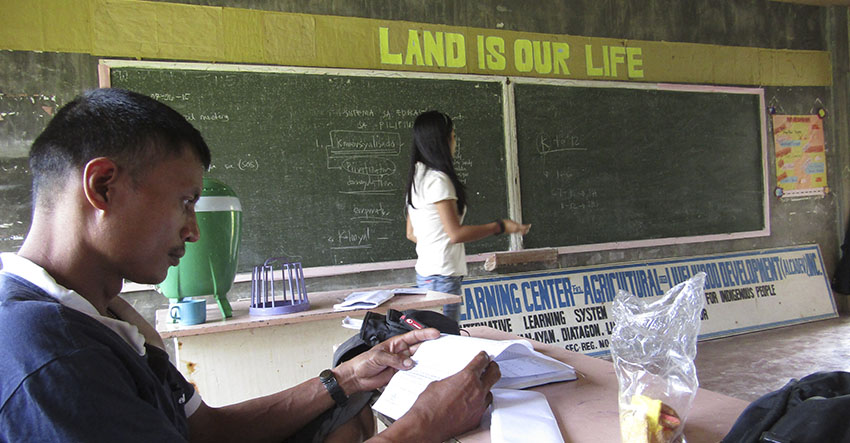 DAVAO CITY – Five days after two civilians were reportedly killed by alleged members of a tribal armed group in Surigao del Sur, the residents in a village in Lianga, Surigao del Sur were woken up by the loud sounds of combat boots kicking the walls of their houses early morning Tuesday.

At around 5:00 am three people were killed in Km. 16, Barangay Diatagon, including Emerito Samarca, 54, who is the executive director of the Alternative Learning Center for Agriculture and Livelihood Development (Alcadev). The other victims were Dionel Campos, chairman of a local farmers group, the Malahutayong Pakigbisog alang sa Sumusunod (MAPASU) and his cousin Bello Sinzo.

Kahugpungan sa mga Lumadnong Organisasyon (Unity of Lumad Organizations) in Caraga spokesperson, Josephine Pagalan in a phone interview with Davao Today said the armed men who belonged to the Magahat Bagani force started arriving at 3:30 am on Tuesday.

At around 4:30 am, Pagalan said other residents of Sitio Han-ayan, including students and teachers of Alcadev and Tribal Filipino Program of Surigao del Sur (TRIFPSS) with the chairman of Mapasu, Campos, started to arrive.

She said Samarca was left at the school building after the teachers and students were asked to vacate their rooms.

Pagalan said Samarca, who was called in their community as Tatay Emok, was found by the teachers and students of Alcadev dead inside the faculty room located at the second floor of the school building.

Pagalan said the other two victims were also taken by the armed men.

She said Campos was forcibly taken outside her house and was ordered to sit down. Later, a teacher of the school named Evelyn Italio was forced to sit near Campos.

“Nagtapad sila dayon gipadapa si Dionel Campos, sabay pusil, ug ang tanang paramilitary groups, tanan nagpabuto (They sat together then (Campos) was ordered to lie on his stomach, then he was shot and all the paramilitary groups started firing their guns),” said Pagalan.

“Mura na mi og gisangag, abi namo kaming tanan patay na ganinang alas-5 sa buntag (We were like fried in a pan, we all thought we would be killed),” she said.

She said Campos was killed in front of so many people.

In a statement sent to the members of the press, the Tribal Filipino Program of Surigao del Sur (TRIFPSS) and Alcadev identified the Magahat members who fired at Campos and Sinzo as brothers Loloy and Bobby Tejero.

She said the armed men took the personal belongings of the teachers including her cellphone. 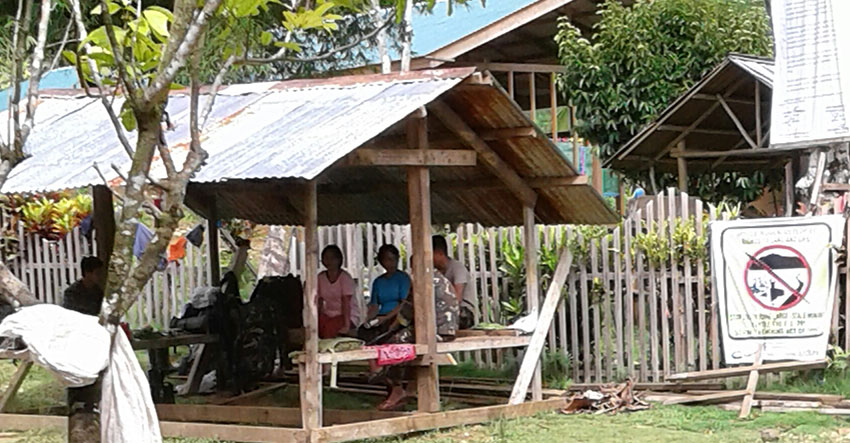 ARMY IN SCHOOL? Members of the 36th Infantry Battalion are seen inside the shed owned by the Alternative Learning Center for Agriculture and Livelihood Development (Alcadev) outside the school entrance. Karapatan Caraga said this picture was taken on Monday at around 9:30 am. The waiting shed is right across the MAPASU cooperative that was burned down by armed men later that afternoon. (Photo contributed by Karapatan Caraga)

In a phone interview, Captain Alberto Caber, spokesperson of the Army’s Eastern Mindanao Command, denied reports that there were special forces in the area. He also said that the 36th Infantry Battalion.

“What transpired in the area was a feud, wherein nagkaroon ng bawian yung dalawang grupo (wherein two groups attacked each other),” he said.

He also said the 36th IB and the local police went to the area “in response to the request of the mayor to facilitate normalization, kasi nagkaroon ng bawian eh, patayan ng dalawang grupo.”

“Now it has normalized,” he said.

Asked who the two groups were, Caber only referred to them as “yung pinatay at yung pumatay (the one killed and the killer).”

Caber, however, said he could not confirm if the feud was a pangayaw (tribal war) but described it as “like a rido in Islam”.

Caber said the Army is not involved with the incidents, referring to it as “pure crimes in the community.”

But, Pagalan said the Magahat troops withdrew with the military.

Pagalan said the Army’s 36th IB and special forces arrived in Diatagon on August 30, occupying their villages and the school.

Pagalan said the armed men were wearing army uniforms that did not have patches. Pagalan also said that the armed men told them to stop supporting the New People’s Army (NPA).

She added that the group also warned them to leave the community in two days or else they will all be killed.

“Niingon sila nga mobakwit mo sulod lang sa duha ka adlaw, kung naa pa mo mobalik mi dinhi huruton namo mo pagpamatay.  Mao na siya nga pugos gyud mamakwit an mga katawhang lumad dinhang dapita (They told us ‘evacuate in two days, if you are still here, we will be back and we will kill all of you.’ That’s why the indigenous people in this area are now forced to evacuate),” Pagalan said.

She said if all the Mapasu members will evacuate, they will reach around 2,000 individuals. She said the provincial government had already provided for vehicles to be used during the evacuation.

Pagalan said the cooperative owned by the Mapasu was also burned to the ground by the armed men. She said the tribal force also attempted to burn the school.

Pagalan said the government is attacking IP schools in communities.

The Alcadev said the latest killings “are meant to destroy the unity of the lumad people who have been strong in resisting the plunder of their ancestral lands within and surrounding the Andap Valley Complex by large scale mining and plantations pushed by the (Aquino) government.”