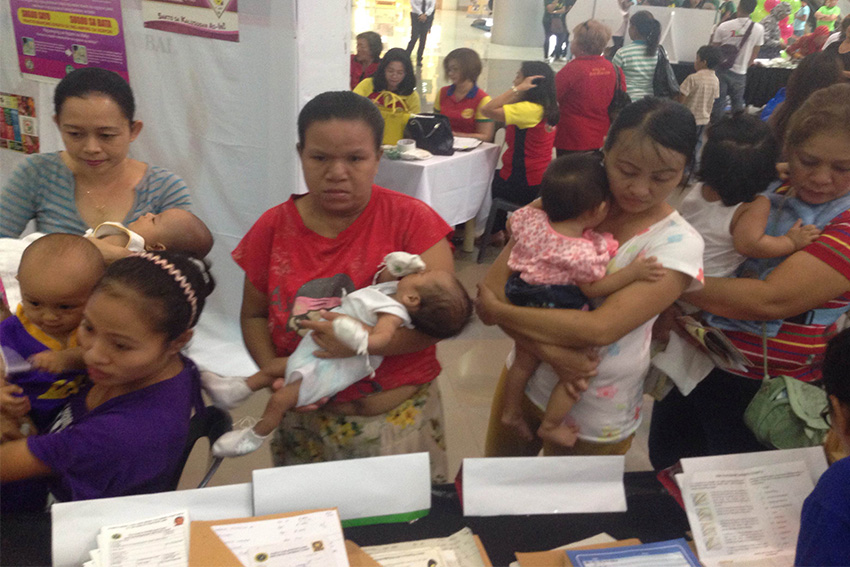 DAVAO CITY — Almost a hundred mothers and young children attended the nutrition fair organized by the National Nutrition Council in a mall here on Wednesday, July 27 in the bid of mothers to get free vaccination for their infants.

Amy Mutya, 37 and her three-month old daughter were among them.

Mutya said she had to avail of the free vaccination services for her baby, which was given during the nutrition fair as mothers like her find it difficult to spend money for health.

Mutya, from Barangay Isla Verde said she has three other children, a 16-year old and 9-year old. Her husband works as a taxi driver, a better job, she said, compared to when he was working as a construction worker.

“We still find it difficult to have check up, especially if my husband is sick, he cannot go to work so we have to scrimp on what we have,” she said.

When her husband was just a construction worker, Mutya said there was a time they had to borrow money from their neighbors just to take her child to the hospital.

“It’s very difficult if you don’t have money to pay for check-up, hospital bills, and buy medicine,” she said.

“Maybe those who can afford can just send their children to a hospital when they are sick, but for us, poor people, it’s different,” Mutya said.

The money they had today, she said, was enough to pay for their transportation going to the nutrition fair held at the SM Mall in Ecoland.

She had her baby checked up by doctors because of his pneumonia. “He has this since he was two months old,” she said.

The doctor gave them a prescription but she said they don’t have money to buy the medicine.

“I hope they would also provide free medicines. It’s really difficult because the budget we have is only allotted for food,” she said.

Labuca’s husband works in the construction and sometimes sell various items during a fiestas.

Mutya said she hopes that the government would be able to provide free health care to all, especially to the poor.

Children of poor families like Mutya and Labuca are prone to malnutrition.

Dr. Maria Teresa Ungson, regional coordinator of the NNC in Davao region, said not being able to receive proper health care and nutrition can lead to stunting, where the child’s height is very low for his age.

“We have high prevalence of stunting in the region, almost 1/3 of our preschool children are stunted,” she said, adding it is an “alarming” number.

The NNC defines stunting as “a result of long-term food and nutrient deprivation that retards physical growth and cognitive development, and increases the risk (in) illnesses which may later affect economic productivity.”

She said the children’s nutrition should be attended to during his first 1000 days, which starts from the mothers conception until the baby is two years old.

“After two years old you can only do very limited corrective measure, so we really have to focus on the child’s first 1,000 days,” she said.

Asked on how poor families like Labuca and Mutya could afford health services with the problems of lack of regular jobs and poverty, Ungson said the government’s Philippine health insurance program and the Department of Social Welfare and Development “can cover some expenses”.

“You just have to be patient, because you need to line up and wait,” she said.

For Mutya, she still hopes that health services in the country would soon be made more accessible to poor families.

“Libre na unta kay luoy pud kaayo ang mga pobre kay panahon nga magsakit sila wala silay ikapacheck-up (I hope that health services will be free because when poor people get sick, they do not have the money to pay for their check-up),” she said.(davaotoday.com)