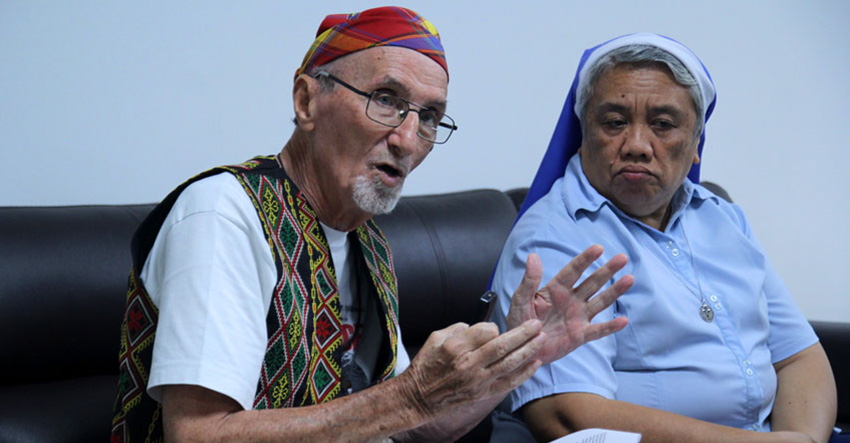 ITALIAN PRIEST. Father Peter Geremia, PIME, says amid the positive results of the Special Investigating Team for Unsolved cases (SITU) investigation on the killing of Italian priest Fausto Tentorio that there are sufficient evidence against Jimmy and Robert Ato, Jan Corbala, and four other members of the Bagani group, the case has not yet prospered up to now. (Ace R. Morandante/davaotoday.com)

DAVAO CITY – The call for justice for the killing of Italian priest, Father Fausto Tentorio, PIME (Pontifical Institute for Foreign Missions) continues four years after he was shot several times inside a parish compound in Arakan Valley, North Cotabato on October 17, 2011.

Father Peter Geremia, PIME, convenor of the Justice for Father Pops Movement, appeared at a press conference on Tuesday after a biblio-theological reflection led by Archbishop of Cotabato, Orlando Quevedo of the Oblates of Mary Immaculate (OMI) on the life of Father Pops Tentorio held at the Ateneo de Davao University.

Geremia said they wrote a letter to Justice Secretary Leila M. De Lima on September 15 this year to seek the resolution of the case.

The letter commented on the final report submitted by the Special Investigating Team for Unsolved Cases (SITU) to De Lima on May 26, this year.

On February 4, 2014, De Lima issued a Memorandum to the SITU requiring them to conclude the investigation within 30 days.  The SITU is supposedly the “superbody” created to solve the case.

However, up to now, no case was filed against the identified suspects, said Geremia.

In his letter, Geremia also asked De Lima regarding their Manifestation related to the request to order the National Bureau of Investigations to provide information on a certain Loloy “who was identified as an NBI asset who induced some key NBI witnesses to give false testimonies, which they retracted later on.”

“We sent a Manifestation to you Madam, dated May 16, 2014, requesting you to order the NBI to give information on this person. Our Manifestation was never acknowledged,” he said.

“Soon after, we were told by someone close to Loloy, that he was killed. We asked the SITU to verify this matter, but they did not give any clear information,” said Geremia in his letter.

Geremia said Undersecretary Francisco F. Baraan III of the DOJ “gave me an appointment with him and the NBI Director (Virgilio) Mendez in order to clarify the status of Loloy.”

“But when I went to their office, I was told that both of them were out of town and they never gave me another appointment,” Geremia said, adding that he came all the way from Mindanao to Manila “and I realized that they were avoiding me.”

Geremia said they believe “there are strong indications of a cover-up with the connivance of some NBI agents.”

Geremia also lamented that “the military refused to cooperate”.

“The key officers implicated in the case, such as Captain Mark Espirito, (Commanding Officer) of the 10th Special Forces, Lt. Col. Joven Gonzales, CO of the 57th Infantry Battalion, and other officers named in the (Philippine National Police) blotters, never submitted themselves to investigation and refused the summons of the Commission on Human Rights and SITU,” he wrote.

He said General Dionisio Sedillo Jr.  who was the brigade commander at the time Tentorio was killed “sent a long statement saying the AFP had no hand in the killing of Fr. Fausto.”

Geremia also said the Department of National Defense has failed to disarm the Bagani group accused of killing Tentorio.

He wrote De Lima that “the officers who attended the Human Rights Committee hearings of November 8-9, 2012 and August 13-14, 2015 kept on repeating their denial of any connection with the group accused in the Tentorio case, even though it is common knowledge in Arakan that this Bagani group was staying in the camp of the 10th Special Forces and 57th IB in Sitio Kamanagan, Barangay Ganata, and that is still their base up to now.”

Geremia told the members of the press that the suspected Bagani members implicated in the case “are going around now in Arakan.”

“Commandeering openly, and we asked many times the police to arrest (them),to no avail,” he said.

Geremia said they are worried for their security and for the witnesses who testified in the case.

“How can they go back to their normal lives if there is still no resolution on the case? It’s very unfair to tell people to look for witnesses, keep them waiting for four years and then say there’s no case in court,” he said.

He said the witnesses may now end up as targets for revenge.

“So they will be now, targets of revenge, they sacrificed so much,” he said.

He said they are only asking to resolve the investigation process so that cases maybe filed and may proceed to trial.

Geremia said the lawyers told them that the officers could only be summoned to testify during the trial and the DOJ said the evidence is strong, but still the case is delayed.

“I cannot understand the legal process. They make a special investigative team to speed up the resolution. A superbody which turns out to be just delaying (the case),” he said.

Geremia said until now no reply came to them from the Justice Secretary. De Lima, who is included in the line-up of the senatorial candidates under the administration’s Liberal Party, tendered her resignation on October 6. President Benigno Aquino officially accepted her resignation on October 12. (With a report from Ace R. Morandante/davaotoday.com)