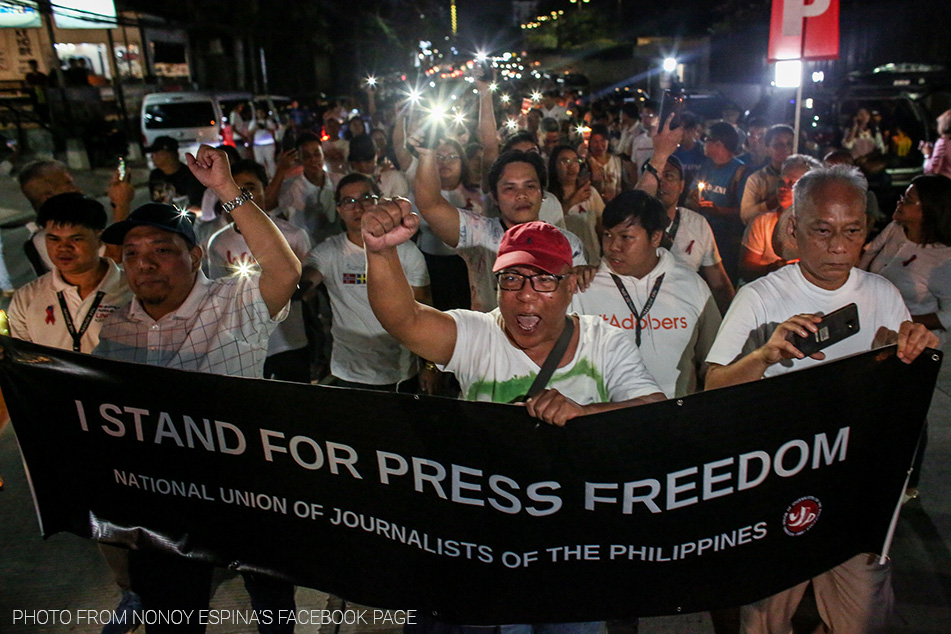 Jose Jaime “Nonoy” Llavore Espina walked his talk in defending press freedom and welfare of media workers in the country, braved vilification and threats on his life and said this line many times over: The press is free not because it is allowed to be free. It is free because it insists on being free.

Espina died in his home at past 9 in the evening in Bacolod City surrounded by his family as announced by his sister, journalist Inday Espina-Varona, who on her Facebook account late Wednesday night. Nonoy had liver cancer, and had survived a severe COVID-19 infection weeks earlier. He was 59.

Fr. Baby Gordoncillo, who married Espina and wife Leny Rojo and baptized their children, gave the last rites for Espina before his cremation on Thursday morning. His ashes were brought to his ancestral home late in the afternoon.

A stalwart of media freedom, Espina never wavered amid waves of attacks on the freedom of the press. Instead, he soldiered on from Marcos dictatorship until the Duterte administration, the National Union of Journalists in the Philippines (NUJP) said in a statement.

‘’He consistently served the Filipino people by upholding the truth. He was the loudest voices at rallies in support of the renewal of ABS—CBN’s franchise, led a march in Quezon City in March 2020, and later joined similar activities in Bacolod City.”

The NUJP said Espina was among the first responders at the Ampatuan Massacre in Maguindanao in 2009 and ever since he was outspoken in the campaign for justice for the victims, which included 32 media workers, and had always been present in commemoration and in activities leading up to the verdict indicting members of the Ampatuan clan in 2019.

As one of the founding members of the NUJP, Espina was elected to the directorate multiple terms until his election as chairperson in 2018, and led the union fighting against “waves of attacks and harassment by the government.”

He was red-tagged for defending colleagues and was a target of government propagandists.

“While he was quick to curse those who trample upon press freedom and human rights, Nonoy was always compassionate with colleagues, especially in the provinces. As a peer supporter, he would always take time to listen, was never judgmental and always understanding,” the NUJP said.

The NUJP thanked Espina for his long years of service to the union and the profession as it vowed to honor him by protecting that prestige.

The Internews Philippines team saw Espina’s utmost dedication to the defense of press freedom and his ever ready helping hand available for the media community, recalling the team’s encounter with Espina during a visit at the Ampatuan Massacre site in 2019.

“We remember being moved, impressed and humbled by his obvious dedication to the family of the victims, his generosity and his kindness. We, at Internews, are honored to have shared the cause with such a caring and hardworking soul as Nonoy. Journalism and freedom of information in the Philippines and beyond have lost a great one. We will strive to honor his life and memory by continuing his tireless commitment and support to journalist safety and welfare.’’

For its part, the Foreign Correspondents Association of the Philippines (FOCAP) remembers Espina’s independent and courageous journalism who advocated the rights and welfare of media workers especially “the most vulnerable among us and provincial journalists.”

“While he led rallies in the streets and raised press freedom advocacies everywhere, Nonoy did not loom large over many but was a media everyman, who had a laidback and friendly demeanor that fostered a life of activism in one of the most perilous countries in the world for journalists,” FOCAP said.

Health and welfare fund for journalists

The Espina family, following Nonoy’s dream of putting up a health and welfare fund for journalists in need, is requesting those who wish to send flowers, food and cash aid to the family to send it instead to NUJP, which has agreed with the family’s wishes to accept any aid, to kick start the fund.

“We know so many colleagues live under precarious economic conditions, with no tenure and, often, with little social benefits. We in the NUJP often say, there is no genuine press freedom if journalists live and work under conditions of fear, poverty and corruption. Pagtibayin natin ang hanay to fight for better wages and work conditions. But let us also let Nonoy spark us into doing the practical. Ambag ambag tayo para sa kapatirang mamamamahayag! (Let’s contribute for our fellow journalists),” said Espina-Varona.

Outpouring of love and memories

In one of Espina-Varona’s Facebook posts, she said that even during her brother’s critical care, she told him through a video call of the news that the International Criminal Court prosecutor was given the green light for a full probe into extrajudicial killings linked to Duterte, Espina nodded and raised that fist from his bed.

“Even when he was weakening, he’d perk up at two things: music and updates on issues and causes dear to his heart. And till the end, that fire blazed high,’’ she said on her Facebook post.

She quoted some of her brother’s statements posted and shared by friends: You who cheer on, rejoice, mock or otherwise approve of killings [activists], remember that the tide often turns swiftly and you may find yourself on the receiving end. But know that many of those whose blood you now howl for will NEVER countenance the trampling of your right although you can also be sure that they will not ease up on their demands for justice.

Most of his friends would describe him as the ‘’cool guy’’, “big brother’’, “feisty”, “compassionate”, and “icon of press freedom”.

Jhoanna Ballaran, NUJP’s treasurer, wrote on her Facebook post that despite the pain and discomfort, Nonoy would steer people and NUJP toward a clear goal: to defend press freedom and protect journalists.

“Despite feeling ill at times, he would immediately email us draft statements condemning red-tagging, the killings and harassment of our colleagues, Duterte’s vilification of journalists and countless other attacks that shook us to the core. He was literally at the forefront of our campaigns,” Ballaran said.

She added, “Nonoy, who described himself on Twitter as an “all-around stumblebum,” never took himself seriously; only his work and principles and his infectious vigor inspired many colleagues to stand for press freedom and uphold journalistic values that I was lucky to have seen and learned from. He believed all his efforts were puny, but the collective struggle for press freedom and protection of journalists was a glorious, splendid fight, as he said in his last speech as NUJP chairperson.”

Nestor Burgos, a colleague and friend, in his post said the outpouring of grief over the passing and celebration of Nonoy’s life are not surprising as he will always be an icon of press freedom, pillar of the community press and for being a true blue journo.

“You fought so fiercely and bravely because you loved so deeply. Salamat Noy for a wonderful life, embracing, singing of and fighting for a more wonderful world,” Burgos wrote on his Facebook post.

The National Democratic Front of the Philippines (NDFP) salute Nonoy for excelling in his craft and most importantly, it said, for his remarkable and uncompromising pro-people stance. Espina has been covering and posting updates on his Facebook on the peace talks between the government and the NDFP.

“Goodspeed Nonoy. We’ve lost many family members and friends in the last year and a half, but I didn’t think you’d be one of those who’d go. You were always steadfast and full of life. But that’s fate for you; it goes where it will. You left a new ‘wonderful world,’ Not, but you’ll be remembered with a huge ache in our hearts while inspiring us to stand without wavering that the press be free. Watch over our country wherever you are,” May Rodriguez, a former NUJP director, wrote on her FB.

“We love you, Nonoy. And we are grateful to your family, your parents and your siblings for sharing you – your life, your wisdom, your heart – with us,” said Carlos Conde, a former NUJP Secretary General and friend.