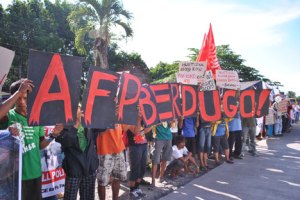 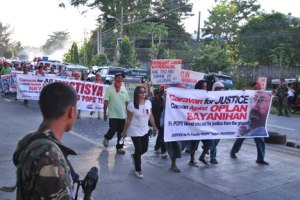 QUEST FOR JUSTICE. Thousands of movers and supporters of the Justice for Fr. Pops Movement hold a caravan for justice and against the government’s counter-insurgency Oplan Bayanihan in Kidapawan City, North Cotabato last year. (davaotoday.com photo by Medel V. Hernani)

“Clearly, he deserved the NPA’s punishment” and his death “is a first step towards achieving full revolutionary justice for the beloved Fr. Tentorio.” — New People’s Army

KIDAPAWAN CITY, North Cotabato, Philippines — The communist New People’s Army (NPA) has admitted it was behind the killing of a businessman Wednesday morning here.

In an emailed message to the media, the Merardo Arce Command (MAC) of the NPA in Southern Mindanao, through its spokesperson Rigoberto F. Sanchez said that Patrick Wineger, a 48 year old Swiss-Filipino businessman had a standing order for assassination for his involvement in anti-insurgency campaigns of the military and his links to the murder of Italian priest Fausto Tentorio, PIME (Pontifical Institute for Foreign Missions).

Sanchez said Wineger has long been on the NPA’s standing order for his anti-communist activities in North Cotabato, Davao del Sur and Bukidnon provinces, including his direct recruitment and supervision of the indigenous peoples as military assets and involving in passing of intelligence information.

The NPA also claimed that Wineger was part of the notorious clique of retired General Jovito Palparan and Norberto Gonzales in the implementation of the bloody ‘Oplan Bantay Laya,’ the counter-insurgency program of former President Gloria Arroyo.

“Wineger continued to be a strategic part of intelligence and paramilitary network of the AFP’s counter-revolutionary activities under the auspices of Oplan Bayanihan,” the statement added.

In the same statement, the NPA also maintained that Wineger coddled and financed fanatical and anti-NPA ‘Bagani’ groups that targeted Fr. Tentorio.

‘Bagani’ groups are composed of armed indigenous peoples or ‘lumads.’

“Clearly,” Sanchez added, “he (Wineger) deserved the NPA’s punishment” and his death “is a first step towards achieving full revolutionary justice for the beloved Fr. Tentorio.”

Fr. Tentorio was murdered in Arakan town in October 17 last year with the government probers facing a blank wall in identifying the mastermind(s) of the senseless killing.

The press statement released also accused the 6th Infantry Division of the Eastern Mindanao Command of the AFP and its civilian agents of perpetuating lies “of having solved the extra-judicial killing of Fr. Tentorio with its ineptitude in handling the criminal case involving Fr. Tentorio’s killers and the false identification of the principal(s) to the crime.”

It added that the “AFP and the US-Aquino regime have shamelessly exonerated themselves in the neutralization of Fr. Tentorio under the mantle of the counter-revolutionary Oplan Bayanihan.”

Meanwhile, Col. Cesar Sedillo, the commanding officer of the 602nd brigade of the AFP in North Cotabato, in an interview with Sandigan program over a local radio station here Friday morning, lambasted the NPA over the killing of Wineger and called the incident as plain criminal act.

Sedillo added Wineger was a good and God-fearing fellow who supported the programs of the government.

The incident, he added, was an indication that insurgency problem still exist in his area of jurisdiction including Kidapawan City.

The army officer also claimed the killing of Wineger ignited more the long disgust of the civilian populace against the NPAs.

On the other hand, the nongovernmental Promotion of Church Peoples Response (PCPR) in North Cotabato believed the quest for the truth behind the murder of Fr. Tentorio must continue.

Pastor Ernesto Estrella, PCPR’s spokesperson refused to comment on the revelations made by MAC-NPA linking Wineger in Tentorio killing.  He, instead, called for unified efforts to end impunity and seek justice to all victims of summary killings in the country.

Fr. Peter Geremia, PIME also refused to give comments on the claim of MAC-NPA on Wineger’s link to Tentorio’s murder.  When reached by Davao Today via phone, Fr. Geremia, also spokesperson for the Justice for Pops Movement, said he would just wait for the outcome of the case filed by the National Bureau of Investigation (NBI) at the provincial prosecutor’s office.

A murder case had already been lodged by the NBI at the provincial prosecutor’s office in Kidapawan City in connection with the murder of Fr. Tentorio.

Charged by the NBI last February 14 was confessed gunman Jimmy Ato together with his brother Robert and brothers Jose Sultan Sampulna and Dima Maligudan Sampulna.

At press time, the prosecutor’s office has not yet ruled on the charges filed by the NBI. (Alex D.  Lopez/davaotoday.com)