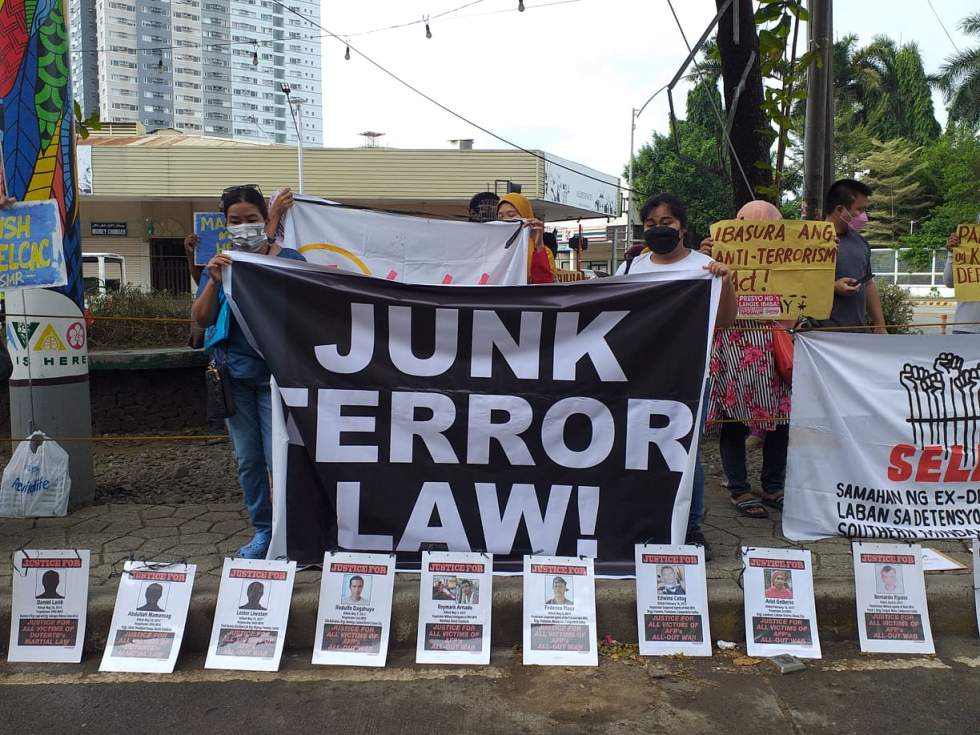 DAVAO CITY – Progressive groups commemorate International Human Rights Day with a rally warning that more bloodshed may happen now that the Anti-Terror Law has been upheld by the Supreme Court.

The Supreme Court on Thursday December 9 upheld the constitutionality of the controversial law but struck down two sections: Section 4 on the definition of terrorism and Section 25 which defined functions of the Anti-Terrorism Council.

37 petitions were filed before the Supreme Court last year, including those from the progressives, petitioning for the repeal of the said law for stifling democratic and constitutional rights.

The Davao chapters of Bagong Alyansang Makabayan (BAYAN) and Kilusang Mayo Uno (KMU) said that with the Supreme Court decision, the law will legitimize the government’s crackdown on groups and persons critical of the Duterte administration by tagging them as terrorists. 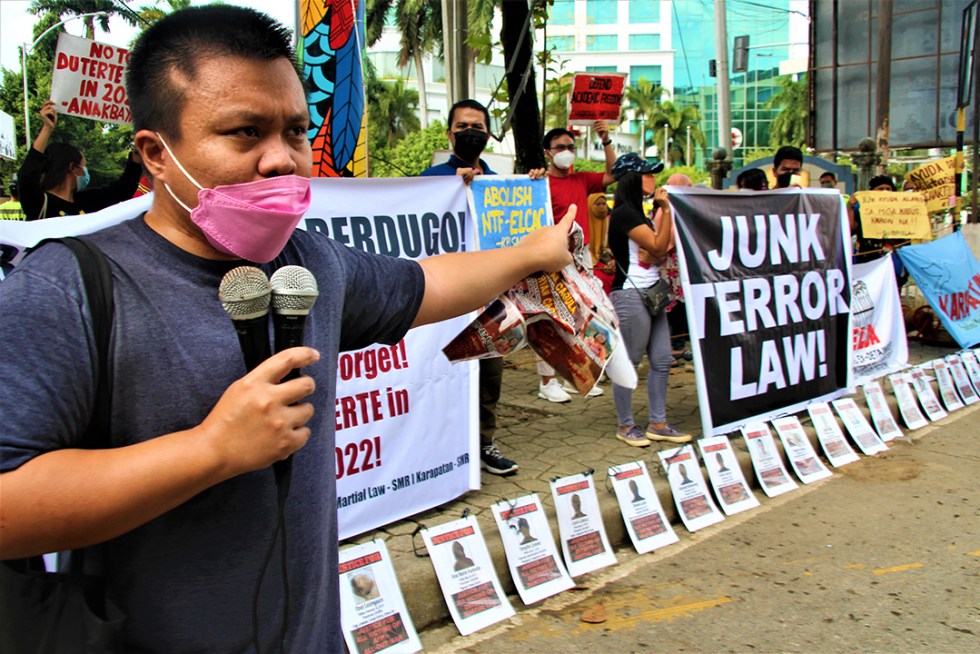 Protesters express dissent against the Anti-Terrorism Law in a short program, saying it will only curtail freedom of expression (Kath M. Cortez/davaotoday.com).

“This law violates the people’s exercise of their rights and to stand for their legitimate concerns. This law only makes legal and official what the state has been doing to attack our basic rights, and that is a very worrisome situation,” said Rodney Baslot, spokesperson of BAYAN-Southern Mindanao.

In Southern Mindanao, the human rights group Karapatan recorded 56 deaths of human rights defenders from the start of the Duterte administration from July 2016 to August 2021. The region also tallied 30 political detainees in the same period.

“We expect the attacks to intensify because even without the implementation of the (Anti-Terror) Law, the government’s attack on the people have been worse. We see it in how the people in Davao are being conditioned to see the presence of the military and police who are powerful against the people,” Baslot added. KMU said the attacks on labor rights will intensify as had happened to unions affiliated with them in the past. This includes the harassment and red-tagging of the Sumifru plantation union members Nagkahiusang Mamumo sa Suyapa Farm-National Federation of Labor Unions-KMU (Namasufa-Naflu-KMU) in Davao de Oro.

Two members of Namasufa were killed during the height of their strike in 2018 as they demanded for collective bargaining and reinstatement of workers retrenched after they joined the strike.

KMU said that 87 members of Namasufa were also were forced by authorities to “surrender” as members of the Communist Party, an operation implemented by the National Task Force to End Local Communist Armed Conflict (NTF-ELCAC).

PJ Dizon, KMU Southern Mindanao spokesperson, said these operations have been rampant all over the region and the country. “But the ones they tag as communists are members of KMU which is a legitimate organization. This is the danger when you become a union member but the state calls you a terrorist,” he explained.

Petitioners warned that the law still allows proscription of persons and groups as terrorists.

Dizon said this crackdown will put pressure on workers and unions without addressing legitimate labor rights and concerns.

The Anti-Terror Law was passed last year in June and signed into law by President Rodrigo Duterte in July.

During that same period, two sets of red-tagging posters were spread all over Davao City, targeting progressives including Dizon, UCCP Bishop Hamuel Tequis, Doctor Jean Lindo and other sectoral leaders as “terrorists” and “berdugo” (killer).

The National Union of Peoples’ Lawyers (NUPL), counsel of BAYAN, and other groups, said they will continue to take “legal and political actions” to challenge the Anti-Terrorism Law.

“Expression, including protected expression, will still be chilled into silence, while legitimate activities of development organizations and human rights defenders are still in danger of being falsely considered as material support for terrorists,” Olalia said. Progressive group says no to a Marcos-Duterte tandem for the next administration (Kath M. Cortez/davaotoday.com).

Baslot and Dizon said despite these threats, they will continue to amplify legitimate issues of the public especially on the pandemic and make the government accountable for its failures to address people’s concerns.