DAVAO CITY, Philippines — A day before Valentine’s Day, women’s rights advocates in the city organized the local leg of One Billion Rising (OBR) – a global campaign that seeks public attention on gender-based violence through flash mobs.

The One Billion Rising 2020 campaign, with the theme “Raise the vibration, rise for revolution,” urged people to take action against different issues affecting girls, women, and the LGBT (lesbian, gay, bisexual, transgender) community.

On Thursday’s event at the Brokenshire Resource Center, OBR Global Director Monique Wilson said the annual campaign, now on its eighth year, aims to escalate the people’s movement against all forms of violence.

Wilson was in Davao City to personally express support for the indigenous peoples (Lumads) in Mindanao who were displaced due to military abuses in their communities.

“I always think of you. Your strength and perseverance inspire and motivate me to continue the fight. I’m very excited to be here, dancing with you. [Your struggle] inspires a lot of people across the globe and we will never stop [fighting],” she said.

Lumad issues take center stage in this year’s OBR campaign, after the recent attack by bolo-wielding men, identified by the evacuees as members of paramilitary group Alamara, hacked their way into the UCCP-Haran evacuation center.

Wilson was accompanied by activist-performer Mae Paner also known as Juana Change. Paner also expressed solidarity with the Lumads who continued to rise against state violence. 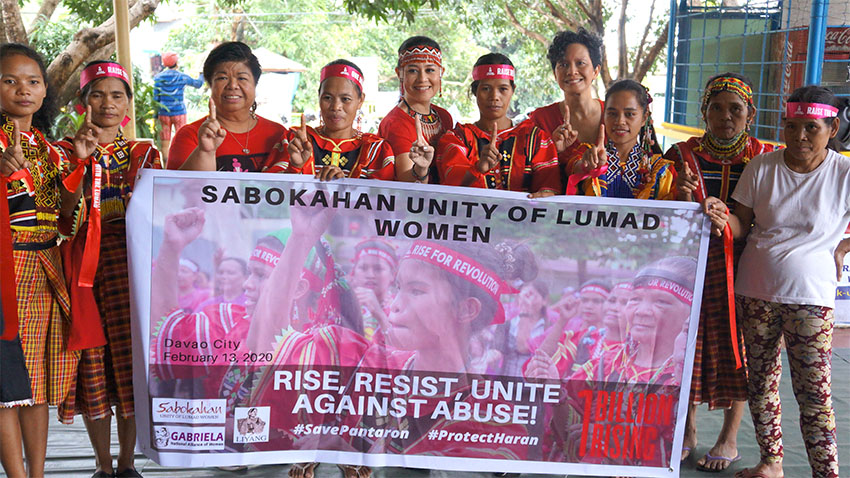 It is the first time Paner joined the OBR dance protest in Davao City.

She recalled joining other advocates in welcoming the delegates of Manilakbayan in 2015, composed mostly of IPs who traveled from Mindanao to Manila, to bring their issues like killings, displacements, and closure of IP schools to a broader audience.

“It pains me to hear their stories, of how once a peaceful life in the hinterland is disrupted by the entry of the military. They were not allowed to continue their education and they are being accused as members of the New People’s Army (NPA),” Paner said.

Paner believed that what the Lumads are seeking for are basic human rights which shouldn’t be denied from them.

For Jomar Elayao, 15, the OBR provides a space for Lumads like him to raise their issues.

Elayao is one of the students of the Bakwit school in UCCP-Haran, established by a network of organizations to address the needs of hundreds of Lumad children, who wished to continue their education inside the evacuation center.

“I dance to call for the respect of indigenous people’s rights, especially our right to education,” he said. 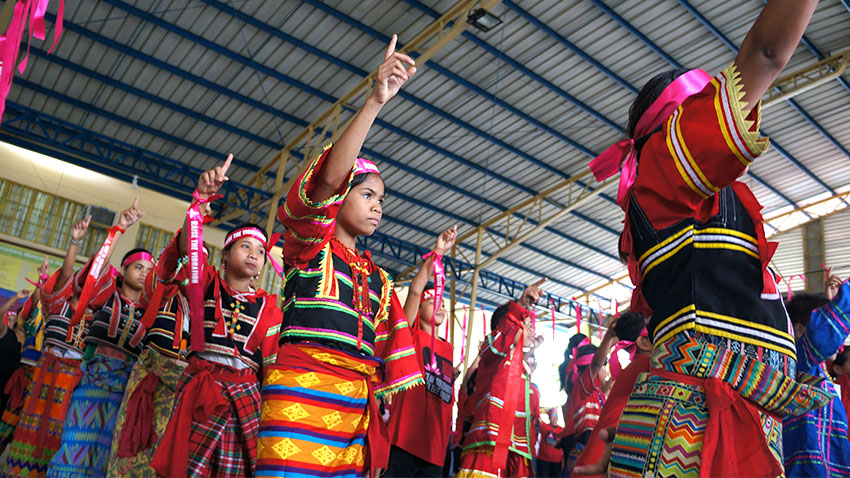 RISE AS ONE. Students of the Bakwit school join this year’s OBR culmination in Davao City. They fled their homes from military abuses years ago, and sought refuge inside the Haran evacuation center. (Ken E. Cagula/davaotoday.com)

Elayao, along with his family, was compelled to leave their homes and livelihood in Talaingod, Davao del Norte two years ago after soldiers tagged their community and school as NPA supporters.

“All I want is to go to school. I want to graduate and be a teacher to help my fellow Lumads,” he said.

Various groups and individuals who joined the annual gathering have different reasons and experiences. But they were united in the call to end all forms of violence. 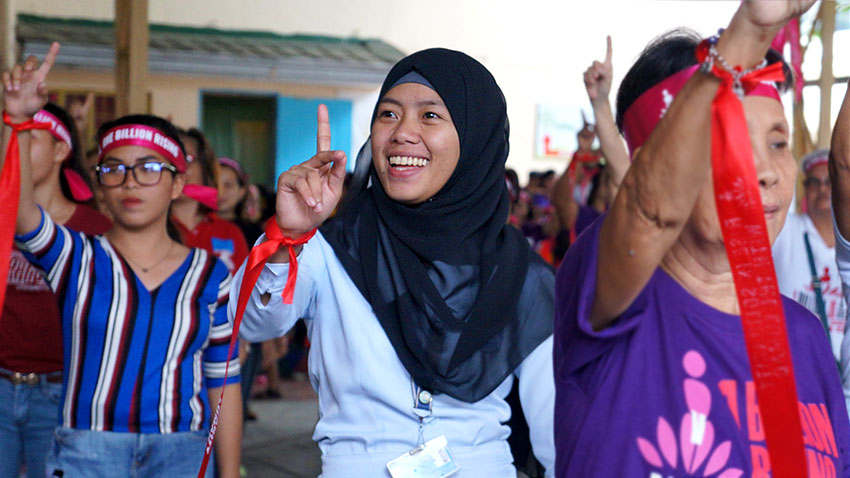 FREQUENT. Amerah Macarimbang, a third-year social work student of Assumption College of Davao, joins this year’s OBR event. It’s her third time in a row after joining the 2018 campaign during a school forum. (Mara S. Genotiva/davaotoday.com)

Amerah Macarimbang, a third-year social work student of Assumption College of Davao, said she was introduced to OBR in 2018 during a school forum. Since then, she has been joining the annual gathering.

She did not hesitate to join the campaign because she understands the cause, drawing motivation from her own experiences as an internally-displaced person.

Macarimbang, who hails from Marawi City, was forced to flee from her hometown after it was ravaged by the fighting between the government forces and Islamic radicals in 2017. She said that government rehabilitation and reconstruction efforts are insufficient and slow, forcing many people to remain in evacuation centers where women and children are the most vulnerable.

“I learned that unity amidst crises is important and we can see that sense of unity in the OBR campaign,” she added.

Men in Valuable Partnership with Women and Children (MVPWC), a group of men advocating to end abuses against women and children, also joined the cause. 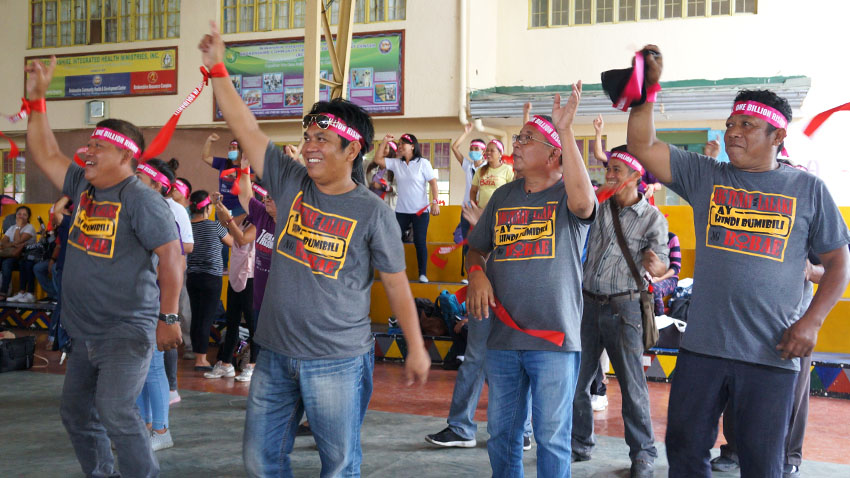 SOLIDARITY. Members of the Men in Valuable Partnership with Women and Children participate in the OBR to show their support in calling to end violence against women and children. (Ken E. Cagula/davaotoday.com)

“We were challenged to participate in this campaign because the number of cases of violence against women and children remained high,” said MVPWC President Eduardo Camposo.

In 2017, the Davao City Integrated Gender and Development Division reported a total of 964 cases of economic abuse against women, followed by psychological abuse with 519 cases, physical abuse with 324, and sexual abuse with 27 cases.

MVPWC operates in seven barangays in the city, organizing men to take action against gender-based violence and counseling to both perpetrators and victims.

Meanwhile, Salma Lumandong and Evelyn Libyos, both members of Barangay Council for Women, have been participating in the OBR campaign for eight straight years.

The OBR, they agreed, is a way to promote unity among women, especially in their respective barangays.

“It brings unity among women, regardless if you’re a Moro, Christians or Lumad,” Lumandong said.

Libyos, meanwhile, said it serves as an eye-opener to the issues of women in different sectors and how they could collectively address them. (davaotoday.com)