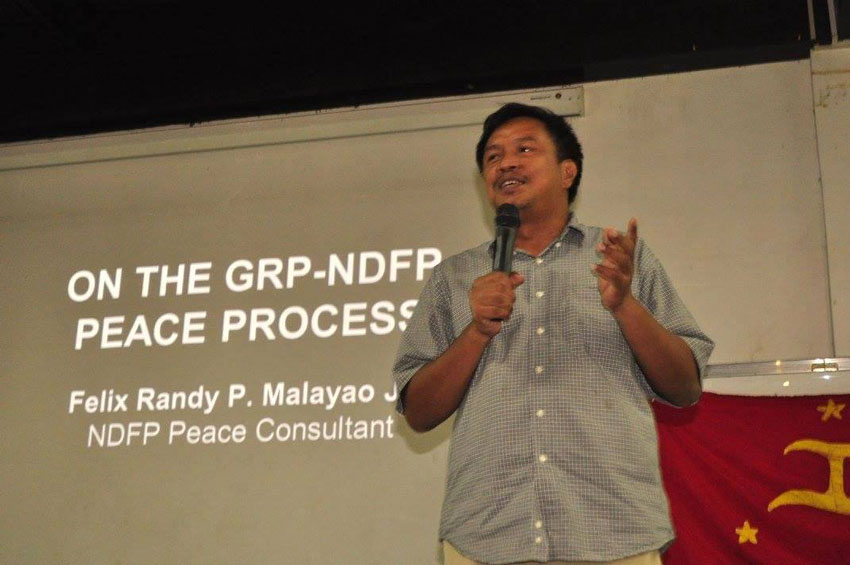 DAVAO CITY, Philippines — The peace group Sowing the Seeds of Peace-Mindanao said the death of National Democratic Front peace consultant was a big blow to the peace process and apparently sends a chilling effects to peace advocates.

Iglesia Filipina Independiente Bishop Felixberto Calang, convenor of Sowing the Seeds of Peace, said the murder of Malayao leaves a gaping hole in peace process between the government and the communists.

“His murder, like the bullets that riddled his body while asleep, punctures through the peace process,” Calang said on Saturday, adding that he and Malayao had productive discourse on peace talks during the two rounds of the GRP-NDFP peace talks in The Netherlands.

“If time were to be counted, there were more moments spent on banters and friendly, non-hostile, chats that Randy had together with the members and consultants of the GRP peace panel, than the serious political exchanges at the formal negotiations,” he said.

Calang said that Malayao had no pending cases in court, describing Malayao as an enthusiastic and engaging speaker. “Randy was our speaker on two occasions in peace forums in Mindanao. He was level-headed, conscientious, intellectually sharp but always unassuming in his ways,” he said.

He then warned that the killing of Malayao as NDF peace consultants could be viewed as a stern warning to those who were engage in peace negotiations.

“That is why we believe his death threatens the spirit of civility and dialogue that is supposed to be the atmosphere in the peace talks, even as battles may continue to rage on the ground. Randy’s murder poses a direct threat to all those engaged in this dialogue. It further emphasizes the need for civilian supremacy to prevail in the peace process. Civilian supremacy ensures that reason prevails over militarist and extrajudicial solutions,” he added.

Calang said they add their voices to the increasing chorus calling for justice for Randy Malayao and for the resumption of the GRP-NDFP peace talks.

“The continuation of the talks guarantees that agrarian reform, nationalist industrialization, human rights, political and constitutional reforms and eventual cessation of hostilities take precedence in a process that is supposed to politically, not militarily, resolve the roots of armed conflict. In his death, Randy stands tall as a champion of these principles,” he said. (davaotoday.com)