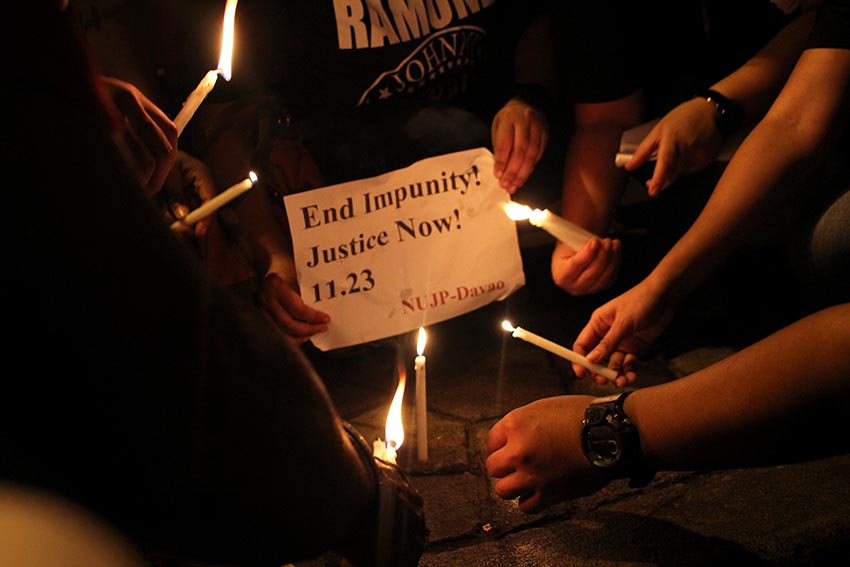 In this file photo taken on November 23, 2016, members of the National Union of Journalists of the Philippines in Davao City lit candles for the victims of the Ampatuan Massacre. The activity was held to commemorate the massacre in Ampatuan, Maguindanao which claimed the lives of 58 people, including 32 media workers. (Paulo C. Rizal/davaotoday.com)

In its “Getting Away With Murder: CPJ’s 2017 Global Impunity Index” report released on October 31, the Committee to Protect Journalists (CPJ) said that in the past decade, 42 journalists were killed with impunity and perpetrators of killings of media workers still go unpunished in the country.

Journalists who cover “politics, corruption, business and crime,” are the usual victims of these killings, the CPJ said.

Based on last year’s global impunity index, the Philippines ranked 4th, the CPJ attributed the country’s drop by one spot to the Duterte’s administration move in October 2016 when a Presidential Task Force on Media Security was formed.

The media task force includes a designated team of investigators and prosecutors for the speedy probe of new cases of media killings, the CPJ said.

It, however, noted that while the creation of the media task force was a progress, “no convictions have been achieved,” despite the commission’s announcement of investigations into the cases of media killings across the country.

The CPJ recorded only one murder from 2016 until March 2017, which was the killing of journalist Joaquin Briones.

Apart from Briones, the government until now is being criticized because of its slow response and the snail-paced grind of justice to the victims of the Ampatuan massacre in 2009.

“Three (out of dozens) of suspects were acquitted in July this year on grounds of insufficient evidence. The regional appeals court also upheld petitions for bail by Datu Sajid, a principal suspect,” CPJ said citing a news report.

“Justice has not advanced for the 2009 Maguindanao massacre victims,” the media watchdog observed.

In the case of Philippines, CPJ said that “conflict is not the only cause of impunity,” it also includes the index-government officials and criminal groups go “unpunished for murdering journalists in high numbers.”

The surge of media killings in the Philippines has prompted human rights groups, and media watchdogs to criticize the government for what they called a “rhetoric” response to “a national catastrophe of killings in a country where freedom of expression was hailed as a pillar of democracy.”

It is not only under the Duterte administration that similar task force on media killings was created. Previous administrations have also created task forces, but all these failed to deliver its mandate to solve the killings by bringing the perpetrators behind bars.

“Despite its assurances that journalists are ‘safer’ now, Duterte’s task force will suffer the same fate so long as the administration actively endorses extrajudicial killings,” the New York-based Human Rights Watch said.

“Without accountability for killings of journalists, media freedom in the Philippines will remain under threat,” it added. (davaotoday.com)