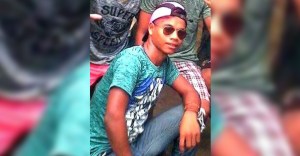 Obillo Bay-ao (Photo courtesy of Save Our Schools Network)

Kerlan Fanagel, a B’laan leader of the progressive group Pasaka Confederation of Lumad Organizations described the police report as “absurd.”

Obillo Bay-ao, 19, was heading home from their farm when he was shot by alleged members of the military’s Citizens Armed Forces Geographical Unit (CAFGU) on September 5 in Sitio Dulyan, Barangay Palma Gil, Talaingod, Davao del Norte.

The police and army denied the allegations that members of the CAFGU was behind Bay-ao’s death.

In a press conference here on September 6, Brig. Gen. Bienvenido Datuin, assistant commander of the 10th Infantry Division claimed that they are certain that the suspect of the incident is “not a CAFGU member.”

But Fanagel said the killings of Lumad continue because of “red-tagging of Lumad areas.”

He also blamed President Rodrigo Duterte’s suspension of peace talks with the communists and his recent threats to bomb lumad schools which the government claims operates illegally.

The school administrations however said they have submitted complete requirements to the Department of Education.

Following the incident, classes in the said school have been suspended.

The SANDUGO Movement of Moro and Indigenous People for Self-Determination and the Save or Schools (SOS) Mindanao Network also condemned Bay-ao’s death.

“The SANDUGO Movement holds the Armed Forces of the Philippines (AFP) responsible for coddling paramilitary groups and mercenary killers responsible for the killing and harassment of lumad students, their parents and teachers as well as leaders of Lumad organizations and communities,” the group said in a statement on September 9.

Bay-ao is the 47th victim of political killings recorded by human rights group Karapatan in Davao region under the Duterte government. (davaotoday.com)