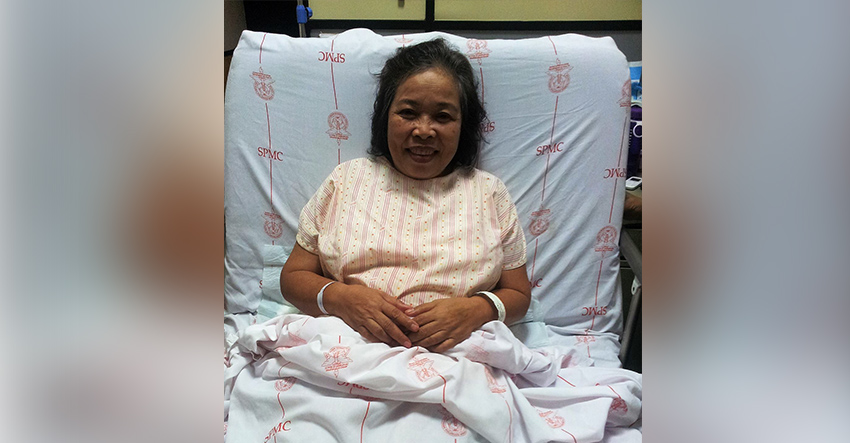 DAVAO CITY, Philippines – For the first time, Amelia Pond, 64, spent her Christmas at a hospital here.

As a family-oriented person, Pond used to spend Christmas with her family at home, here in Davao City.

“Ngayon lang mangyayari na probably sa hospital, gusto namin sa bahay (This only happens now, that we have to spend it at the hospital, but we want it at home),” Pond said, when asked where she wanted to spend Christmas.

She is among the 130 sickly and elderly political prisoners, according to human rights group Karapatan.

President Rodrigo Duterte announced to free the elderly before Christmas, but uncertainty remains.

Already ailing due to back pain, Pond was detained in a provincial jail in Compostela Valley on murder charges that activists said were trumped up. She was then brought to the Southern Philippines Medical Center in Davao for her medication.

Pond is a single mother and also served as a teacher in the Lumad school, Salugpongan, in Davao del Norte before she was arrested by elements of Criminal Investigation and Detection Group in Cebu City on Aug. 19. At the time, she was attending the national assembly of RMP where she worked as southern Mindanao region coordinator.

As the main cook during Christmas, Pond said this year will be different because they might be eating pre-cooked foods; pizza, pre-mixed juice, instant goods.

“My daughters will just buy some keso de bola, and other instant foods, and torotot (trumpets) for the New Year. I wonder how we can make noise here in the hospital,” Pond said.

Aside from spending Christmas with her family, Pond also said she and her two daughters will share their food with those from the non-government organization Rural Missionaries of the Philippines and Salugpongan school members.

“Usually we spend Christmas with families of the RMP workers, we will go to our office. There are those who could not afford to spend for the noche buena,” Pond said.

“That is what would I miss because I cannot go out,” she said.

As a single parent, Pond said she usually do all things to be done in the morning before she goes for work. And her detention made necessary adjustments for her two daughters.

“They are adjusting, because I am the foundation at home,” she said.

“Morning I will prepare for breakfast, organized their schedules, do laundries, that is what is happening everyday at home. It is all my work,” she added.

After doing house chores she goes to her office for work. Because of her health situation she was assigned in the office due to her osteoporosis. She does book illustrations and lay-outing.

The only time she could visit the Lumad school was when the campus is accessible with four-wheel vehicles. “I could no longer ride motorcycles, I could not go to places,” she said.

Pond’s dedication and commitment to help the Lumad for their education made her where she was today. It is her political belief that everyone, Lumad, Christian, or Moro, must have the quality education they could have.

This was not the first time she was illegally detained for her political belief.

Pond said her arrest was “ironic” saying it was Duterte himself who helped them to be freed during the Martial Law years.

“It is very ironic because, during Martial Law, Duterte was the fiscal,” Pond recalled.

“He worked to simplify our cases to ease the litigation, he knows that we will no longer get to the court,” Pond said.

During her younger years, she was arrested together with fellow activists including labor leader Nonoy Librado, Labor Undersecretary Joel Maglungsod, Bro. Karl Gaspar, and even Jun Evasco, who is the present Cabinet Secretary.

During the election campaign period, then presidential candidate Duterte was already repeating his words that if will win, he will be releasing political prisoners identified by the left and other rights group.

On his first months as president, the court granted temporary liberty to several National Democratic Front of the Philippines peace panel members.

But the President said there will be no more releases unless a bilateral ceasefire is signed by the NDF.

Disappointed Pond’s said she was disappointed “because there are now preconditions, before releasing the sickly and elderly political prisoners.”

Pond said that she no longer hopes to be released this Christmas, but she is thankful that the government will be releasing sickly and elderly political prisoners.

“Being part of elderly and sickly, I am glad that I have a chance to be released,” she said.

Pond appealed to Duterte to fulfill his promise.

She said this is giving justice for those like her who were incarcerated for crimes they have not committed.(davaotoday.com)