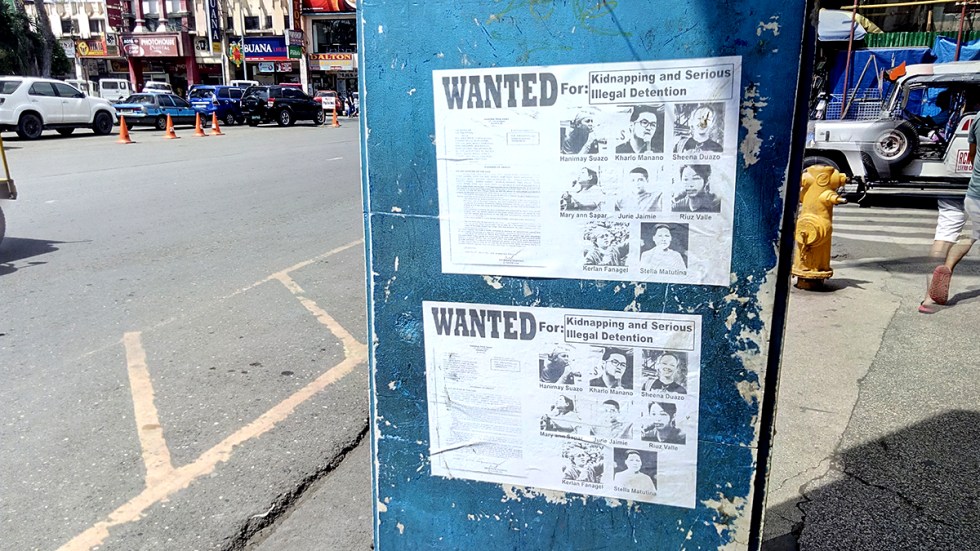 BLACK PROPAGANDA. Progressive groups are dismayed over the bills posted on walls in Davao City that indicate that their colleagues are allegedly “wanted” for kidnapping and serious illegal detention. They say that these cases have been dismissed last July 2016. (Mara S. Genotiva / davaotoday.com)

DAVAO CITY, Philippines – Aboard a taxi, two boys were pressing their faces against the glass window. Outside, on the walls of San Pedro Extension, posters silently scream of crimes their mother supposedly made.

“Ma, why is your face and tita’s on that wanted poster?,” said Mary Ann Sapar, quoting her eldest son.

Sapar, trying to keep her calm, said: she was just “helping the Lumad in Haran.

It was December 2016. A year earlier, the mother was accused of human trafficking, kidnapping, and illegally detailing villagers in Bukidnon and Davao del Norte.

Along with other leaders of progressive groups, Sapar, was sued by members tribal associations in several areas of Davao Region.

Sometime in January 2015, Sapar and others allegedly promised to several Lumad that they would be given free sacks of rice, grocery items, and farm tools if they attend a dialogue in Davao City with then Mayor Rodrigo Duterte, former President Benigno Aquino and then Congressman Emmanuel “Manny” Pacquiao.

The case has been dismissed for lack of evidence.

But a year later, Sapar and others where aghast when they saw those posters resurfacing in the streets of Davao again.

“I thought there were new charges,” she said.

It also included Sister Stella Matutina, who in the same year the cases were filed, was a recipient of the prestigious Weimar Human Rights Award.

At the time, Matutina was head of the Sisters Association in Mindanao and the spokesperson of environmental group, Panalipdan.

And despite that, Sapar is reminded of one thing: that threats against activists are still at bay.

“What if,” she said, “people who weren’t familiar with the case resolution would buy into what the posters were peddling?”

At a press conference on December 1, she was joined by Fanagel, Tony Salubre of Kilusang Magbubukid ng Pilipinas, Carlo Olalo of Kilusang Mayo Uno and Jay Apiag of Karapatan. All of them believe that the posters were meant to revive an old case.

And the old case, they claimed, was part of the government’s plot to “criminalize activists.”

“If we get killed or arrested, the public will think it is normal because we were facing charges,” Sapar said.
Sapar is secretary general of Gabriela Davao, one of the groups accused as “legal fronts” of communists.

These legal fronts are under attack after President Duterte ordered a crackdown on these groups a day before he formally terminated peace talks with the National Democratic Front of the Philippines.

“We will treat you as criminals; we will arrest you, including legal fronts,” the President said in his speech in Nueva Ecija.

So for their safety, the activists have informed their lawyers, and have told the rest of those implicated by the posters to obtain a fiscal clearance.

But the crackdown against activists, she said, would not stop them from “voicing out legitimate issues.”
She said silencing critics only shows the Duterte administration “is no different” from the past regimes. (davaotoday.com)