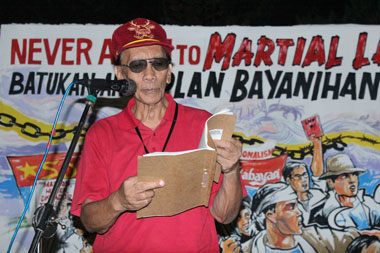 DAVAO CITY – Reacting over the recent interview of Bongbong Marcos on the Marcos’ years, award-winning writer and Martial Law detainee Don Pagusara appeals to fellow survivors to tell their narrative of abuses to the public.

Agustin ‘Don’ Pagusara, a Palanca awardee for stories, poems and plays in Cebuano, said survivors need to speak up of the horrors they experienced to let the young generation know of what happened in the past.

Pagusara and other survivors are reacting over how the Marcos family is using the power of the internet and social media to present a “golden era” of the Philippines under Martial Law.

Facebook pages, YouTube channels, and thousands of comments believed to be part of the Marcos’ propaganda machinery all depict the late dictator Ferdinand Marcos is depicted as a builder of infrastructure and keeper of law and order against the growing communist movement.

Worried of how the Marcoses is using “sugar coated lies” and false narratives to “eventually erase the narratives of the victims”, especially with the family’s interest with Ferdinand’s song Bongbong aiming to run for president in 2022, Pagusara believes there should be a counter-narrative to this.

(That is why it is best they will also speak up, especially those who still can tell their stories because soon enough when we are gone who will speak the truth?)

As a survivor himself, he understands that some of the remaining survivors would choose to live their lives in private or are afraid to partake in a political discourse, but he said their role is crucial “in keeping the history true and intact”.

Pagusara recalls his days of torture which he wrote in his affidavit as one of the claimants on the Marcos’ hidden wealth that is now distributed as indemnification for victims of Martial Law abuses.

“It was an eternity of unspeakably torturous days and nights inside this MIG room. There was constant fear that I might be “salvaged” or murdered. One time, I woke up deep in the night, and it was very dark and very quiet, and I found out that both of my hands were handcuffed and fastened to both sides of the bed. Then I felt someone was in the room who stepped close to my bed, unbuttoned my shirt and ‘walked’ his steely finger on my chest down to my abdomen below the navel. Here he suddenly thrust hard his finger into my loin. I was extremely scared I cried quietly, trying to control the shaking of my body, utterly tormented with the thought I may no longer see the light of day, until I pissed on my pants in bed,” Pagusara wrote in his affidavit.

“I believe that the best counternarrative should come from the survivors and those who are well informed about what happen to us back then,” he added in this interview.

Pagusara is a member of Samahan ng mga Ex-Detainees Laban sa Detensyon at para sa Amnestya (SELDA), a group supporting political detainees, and is also actively campaigning against the narrative of the Marcoses.

Other groups are organized such as No Erasures No Revision, and Coalition Against the Return of the Marcoses and Martial Law which have Facebook pages that bring out the testimonies and narratives of the Martial Law survivors