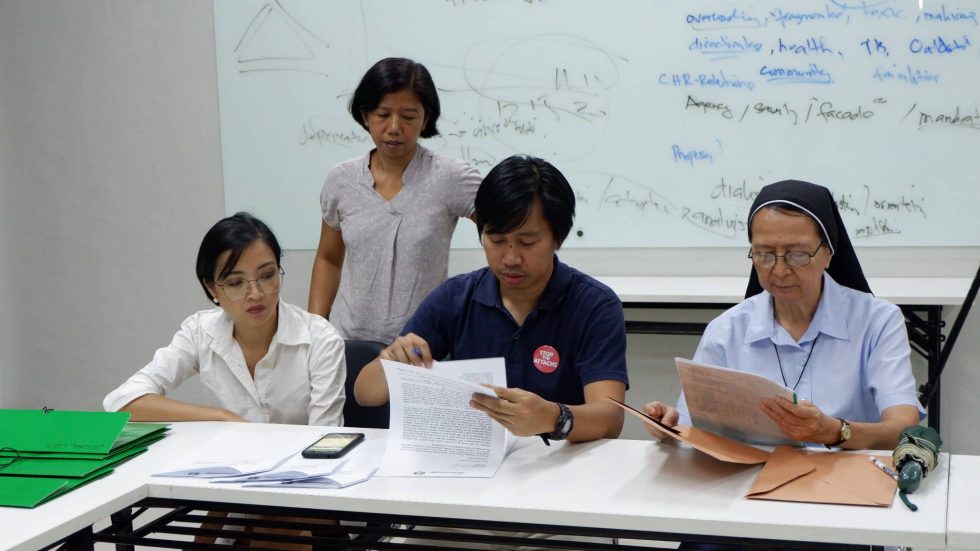 Representatives from Karapatan and the Rural Missionaries of the Philippines (RMP) prepare the complaints to be filed at the Commission of Human Rights (CHR). (Photo courtesy of Karapatan)

DAVAO CITY, Philippines – Groups that advance human rights and have been accused recently as fronts of the Communist Party of the Philippines (CPP) and its armed wing, the New People’s Army (NPA) trooped the office of the Commission on Human Rights (CHR) on Tuesday, March 12, to file formal complaints on the “government-instigated” incidents of red-tagging campaigns against them.

Human rights group Karapatan, in a letter, submitted to CHR Chairperson Jose Luis Gascon said: “These attacks come in a myriad of forms, but altogether has put the lives, security, and liberty of the organization’s national and regional chapters and members at grave risk.”

Roneo Clamor, Karapatan deputy secretary general said they have cited numerous cases of systematic efforts against them on the complaint.

Last month, Karapatan was included in a flyer distributed in Cagayan de Oro City accusing organizations and other personalities as “terrorist members of the CPP-NPA.”

The complaint also mentioned that posters and tarpaulins can be seen in public places with the message: “Karapatan at CPP-NPA ay iisa, at parehong terorista!” (Karapatan and CPP-NPA is one and both are terrorists)

“There is a substantial basis for all of us to be alarmed, what with the Duterte government’s staggering disregard for human rights and its advocates. At least 47 human rights workers of Karapatan have already been killed since 2001, making us conscious and sentient of how vicious and vindictive governments can be against organizations who work to expose the deteriorating human rights situation in the country,” Clamor added.

On the other hand, the Kabataan Party-list and the Rural Missionaries of the Philippines (RMP) also filed their separate complaints against red-tagging at the CHR.

The NSC’s complaint cited abuses allegedly committed by the CPP-NPA against indigenous people in Mindanao.

The RMP along with Mindanao Interfaith Service Foundation, Inc., IBON Foundation and Karapatan were mentioned in the NSC complaint as “fronts” of the communist.

Sr. Belardo asserted the legality of their organization and emphasized the relevance of its missionary work in rural areas.

As a national organization of religious, priests and lay founded in 1969, RMP implemented programs like literacy and numeracy for IP children, livelihood programs, relief and rehabilitation, training and education in rural communities nationwide.

She added that tagging their organization as a communist front is “definitely alarming as it can be used as justification to go after rural missionaries, priests, sisters and lay workers.”

Kabataan Party-list national president Angelica Reyes urged the CHR to conduct an investigation of the smear campaign against organizations that are critical to the administration of Duterte.

“The intensification of black state propaganda especially puts all those opposing the Duterte Administration at risk. The PNP (Philippine National Police) and the AFP (Armed Forces of the Philippines) themselves are imposing a reign of terror amid calls to stop political persecution and criminalization of dissent,” Reyes said.

She added that the vilification stands to discredit progressive party-lists as these attacks were done in time for the election campaign period.

Posters tagging progressive party-lists like ACT Teachers, Anakpawis, Bayan Muna, Gabriela, and Kabataan as “protectors of the CPP-NPA-NDF terrorists” were hanged in the streets of Davao City last month.

Karapatan’s Clamor said the red-tagging and terrorist-labeling seemed to be the work of the National Task Force (NTF) created by Duterte’s Executive Order No. 70 in December 2018 which institutionalized a national approach in addressing communist insurgency.

He added that the NTF’s mandate is centered on a smear campaign against human rights organizations, courtesy of taxpayer’s money.

“Sending officials overseas to spread rumors and make unsubstantiated claims about organizations known to be critical of the Duterte government’s policies sets the bar high for desperation for damage control. It is an utter waste of the people’s resources,” Clamor said.

“We enjoin the CHR and all others to conduct a full-blown hearing on these insidious acts of the Duterte administration. It speaks so much of this government that it persecutes people for the exercise of their civil and political rights, and for thinking critically,” Clamor concluded. (davaotoday.com)