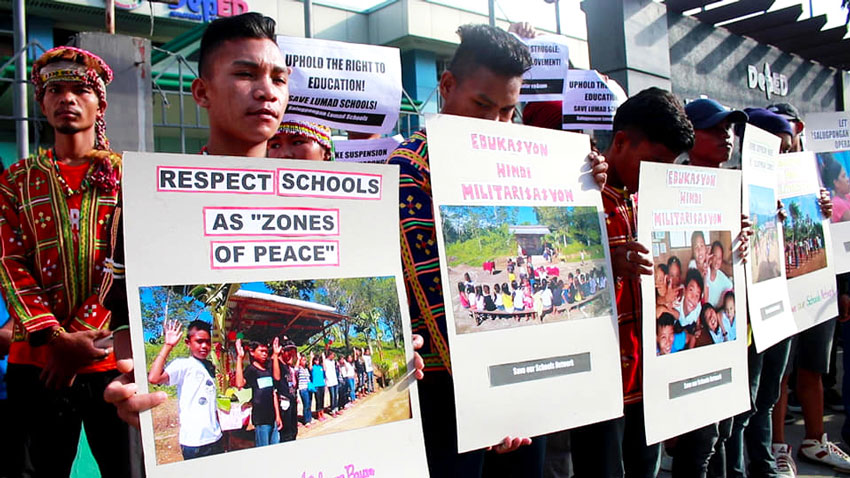 Teachers, students and parents of Salugpongan schools mount a mobile photo exhibit during their protest at the Department of Education 11 office on Monday, August 5, displaying their school activities in the past years.(Photo by Kilab Multimedia)

DAVAO CITY, Philippines — The Lumad Salugpongan school community held another protest on Monday in the Department of Education 11 (DepEd-11) to lift its suspension, this time in a creative form.

Teachers, students and parents trooped to the DepEd gates and mounted a mobile photo exhibit displaying photographs of their school activities in the past few years.

Salugpongan Executive Director Meggie Nolasco said they will continue this series of protests not only at DepEd but also at other agencies that pushed for the suspension of the Salugpongan schools.

“We will do a series of protests to air our side because the DepEd failure to present a comprehensive report with substantial evidence to support its allegations is a clear violation of Salugpongan’s right to due process,” said Nolasco.

Nolasco also said they are unfazed by the DepEd’s suspension order of their 55 schools, as 10 of their schools continue to operate to ensure the learning of their students are not sacrificed “even during attacks”.

“We did not stop our operation in those schools located in communities that are not under attack simply because DepEd does not provide us the result of their fair investigation which was supposed to be conducted prior to the issuance of the suspension order,” Nolasco explains.

Nolasco added that they have received reports where personnel from the military and the Department of Social Welfare and Development (DSWD) have used the suspension order to intimidate teachers, students, and parents to force them to close the schools despite the suspension order still being contested.

She said that “DepEd overstepped its organizational mandate and irresponsibly took up the role of administering legal action, a task belonging to the Department of Justice.”

DepEd 11 released the suspension order of the Salugpongan schools last July 10 based on the recommendation of National Security Adviser Secretary Hermogenes Esperon Jr. and the vice-chair of the National Task Force to End Local Communist Armed Conflict that claimed Salugpongan has been using students in rallies and teaching them ideologies against the government.

Esperon attached an affidavit of a certain Melvin Mansaloon Loyod who identified himself as a volunteer teacher of Salugpongan in Sitio Pongpong in Barangay Sto. Niño, Talaingod, Davao del Norte.

“DepEd gave us a 10-day ultimatum to answer baseless allegations and yet two weeks after our reply, we have not received any official communication from them,” Nolasco said.