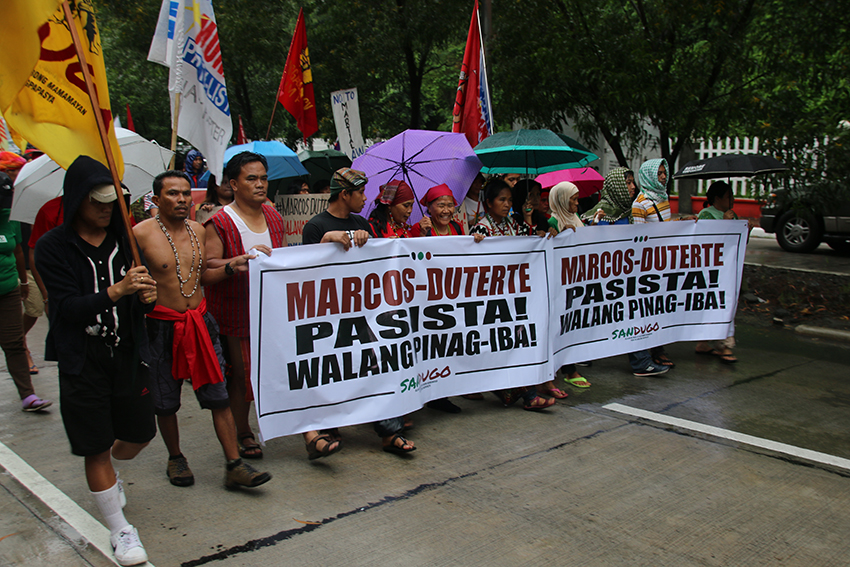 SAVE LUMAD SCHOOLS. Lumad students from Mindanao who are part Lakbayan of National Minorities picket the Department of Education’s office last September 4, 2017 to protest the continuing threats and harassment against Lumad schools in Mindanao. (Alex D. Lopez/davaotoday.com)

Muya told Davao Today in a phone interview that soldiers have been in the community since last week and had been harassing their volunteer teachers who are preparing for the opening of classes.

The Army troops interrogated their teachers by asking information of the names of teachers in charge.

“Soldiers even went house-to-house and threatened the parents that the Salugpongan is not accredited by 4Ps (cash assistance program by the Department of Social Welfare and Development) and that students enrolled in STTICLC will not proceed to higher level because we are not recognized by the Department of Education,” said Muya.

Muya belied the military’s allegation and said they can produce legal documents and permits to operate issued by the DepEd.

When asked regarding the reported presence of soldiers in Lumad schools, Capt. Jerry Lamosao, spokesperson of the AFP 10th Infantry Division, in a text message to Davao Today said “(T)he military unit operating in the areas were conducting Brigada Eskwela, distributing school supplies to students in partnership with the local government and DepEd.”

In Sitio Nasilaban, Barangay Palma Gil in Talaingod, during the flag ceremony on Monday morning, drones were seen hovering the school grounds taking video of teachers and students.

“Soldiers even ordered the students to harvest vegetables and bring it to their camp,” Muya added.

Volunteer teacher of STTICLC in Talaingod, Joan Esperancilla, in a statement slammed the “intimidation of the military and paramilitary forces against our teachers, students and community member.”

Esperancilla reported that at least 20 elements of the 56th Infantry Batallion were camping inside the school in Sitio Tibucag, Barangay Dagohoy since May 29.

“The soldiers looked for the teachers’ ID and told them that they will be occupying the school,” she added.

Around 25 soldiers were staying at six houses in Sitio Km. 30, Barangay Dagohoy. Teachers reported that soldiers in full battle gear had been roving the schools.

In Sitio Km 17 of the same Barangay, the teacher in-charge found around 23 soldiers camping within the school premises and when confronted “the soldiers did not offer any reason.”

Teachers assigned at the STTICLC in Sitio Laslasakan in Barangay Palma Gil, Talaingod were forced to stay in the neighboring community school for a couple of days as 40 soldiers encamped the campus.

“The teachers also reported that motorcycle drivers are being held by military checkpoints who would check on their IDs and question who are their passengers,” Esperancilla added.

According to STTICLC at least 241 students and 11 teachers in five campuses have been affected by the military encampment in Talaingod.

“Parents reported that soldiers went to their houses and warned that they will not able to claim their cash assistance from DSWD if they enroll their children at our school,” Cala said.

Only six students out of 29 who were enrolled during the early registration in February attended their classes on Tuesday, June 5, “out of fear due to the soldiers’ warning.”

Muya also reported that Salugpongan school in Barangay Cabunlot, Compostela town, in Compostela Valley was also not able to start their classes on Monday “as parents were afraid to send their children because of the wrong information propagated by soldiers in the community.”

Muya said they have difficulty in gathering reports from other schools located in far flung areas due to weak telecommunication signal. But they will file a complaint to the Department of Education once the report is consolidated.

“DepEd has the power to call out the military and remind them that soldiers are not allowed inside school premises,” Muya added.

Techer Esperancilla condemned these series of events as violations of international and national laws protecting schools from the presence of armed personnel.

“This is a cycle of attacks on the Lumads that happens year in and out, and we urge the government to be accountable for these attacks on schools,” she added.

Rius Valle, spokesperson of Save Our Schools Network Mindanao, in an interview said Duterte’s martial law in Mindanao has taken its toll in Lumad schools.

“The attacks against Lumad schools vilified by the military has worsened under martial law and President Duterte and the DepEd remain mum on this issue,” Valle said.

Valle said 56 Lumad schools that were forcibly closed last school year also failed to open their classes this week “as parents and teachers are being coerced to admit as NPA surrenderees.”

At least 76 Lumad students are currently having classes inside the evacuation center at United Church of Christ in the Philippines (UCCP) Haran compound here after they fled their homes in 2015 due to militarization.

President Rodrigo Duterte in a press conference after his State of the Nation Address last year, threatened to bomb Lumad schools saying they are violating laws for spreading subversive ideas linked to communist rebels he considered as enemies of the state. (davaotoday.com)