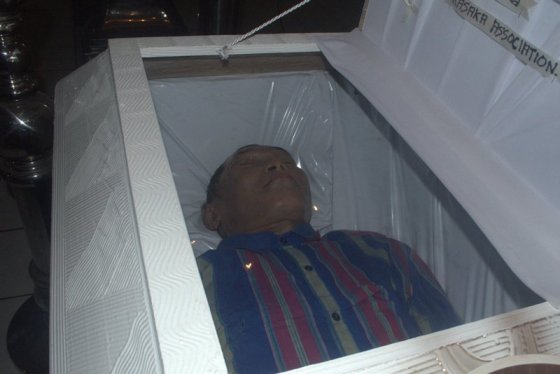 DAVAO CITY – Unidentified gunmen killed last week a leader of farmers protesting against increased military presence in an interior municipality of Agusan del Sur, the second to be killed from the same organization after they evacuated to Davao City to seek public attention to their plight.

The police report was yet to be obtained but the farmers’ organization, Kahugpungan Alang sa Kalambuan sa Kauswagan (Kasaka) in Loreto, Agusan del Sur, identified the slain farmer as Gabriel Alindao, 57, a purok leader and an officer of that organization.

The Kasaka said that on the day he was killed on October 10, Alindao was among the men of Barangay Kauswagan who constructed a military detachment in the place.

Kasaka spokesperson, Marilyn Edgames told Davao Today that Alindao was last seen talking to a “Lieutenant Biernes” of the 26th Infantry Battalion in the construction site of a military detachment.

Alindao and five other persons were building the detachment as part of the military’s counterinsurgency “Bayanihan” project, Edgames said.

Kasaka said Alindao was shot near the public school in the barangay center, after he left the construction site to take his lunch.

The group said witnesses found his body about 20 meters from the school gate at around 12 noon, and lying in a pool of blood with bullet shells beside him.

Kasaka said Alindao was its second leader to be killed in a month, after another officer, Benjie Planos, was also hacked and shot dead last September 13 in his farm in Kauswagan.

Edgames said Alindao was active in the community’s cacao nursery project and described him as a “responsible Kasaka member”.

Edgames said they are pressing their demand to pull out the military from their community, which her group believed was in their area to prepare for the entry of a foreign palm oil investment that covers Loreto.

A blog entry from a Loreto information staff said the British New Britain Palm Oil Limited (NBOL) is said to be planning to invest in Loreto as part of its 36,000 hectare-expansion in Asia.

Alindao’s body was brought to Davao City where he would be buried this weekend.

In an ecumenical service led by Karapatan, the group’s spokesperson Pastor Jurie Jayme said that “there is an unsigned Memorandum of Agreement between the armed forces of the Philippines and Kasaka. The military now must face this incident including the case of Benjie Planos. They must bring back the trust of the people to them.” (Earl O. Condeza, davaotoday.com)