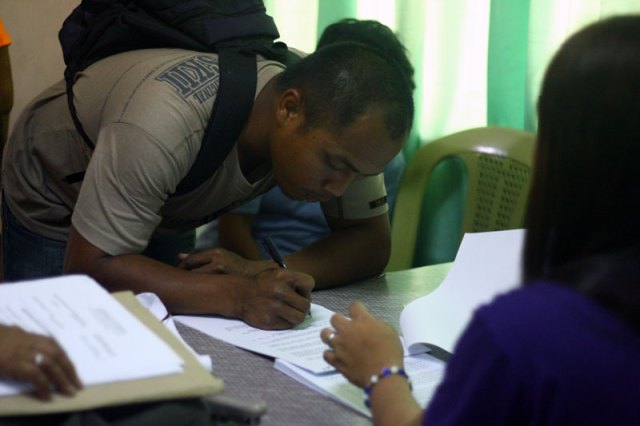 DAVAO CITY – The family of the slain eight-year boy reacted strongly to the decision of the government prosecutor who thrashed its murder complaint against soldiers they claimed to have been in the area at the time of the incident.

“It’s like a slap on my face,” said Evelyn Antivo, mother of the murdered eight-year old Roque Antivo, when she learned of the provincial prosecutor’s resolution to drop charges against soldiers implicated in her son’s murder.

Evelyn was here in the city with her family to confer with their lawyer, Manuel Quibod. She said the news not only angered her, but the community as well.

Evelyn said she did not know of what developed after they filed the complaint on May this year, until the human rights group Karapatan informed them last week of the dropping of the complaint.

The resolution was issued by Compostela Valley Provincial Prosecutor Graciano Arafol, Jr, who dismissed the family’s complaints against Lieutenant Colonel Jerry Borjal, commanding officer of the Army’s 71st infantry Battalion, and Lt. Felipe Llorca, for the killing of Antivo.

The resolution said “the fact of killing the victim by the respondents herein is not sufficiently established.”

But the Karapatan also criticized the prosecution office for lapses in its resolution.

Karapatan spokesperson, Hanimay Suazo said that had it not for them following up the case in the prosecutor’s office last week, they would not had known the complaint was dismissed.

Suazo said the resolution was signed September 17, but this was not released to the family or to their lawyer.

She added that the family’s lawyer Manuel Quibod was waiting for the counter-affidavit from the military but he was surprised to get a resolution instead.

Suazo said the resolution and the manner of handling the complaint was “unacceptable.”

Suazo pointed out that Arafol has already dismissed two other cases of child killings in the region allegedly perpetrated by government soldiers, namely Grecil Buya in New Bataan in 2009 and Sunshine Jabinez in Pantukan last year.

The Antivo family, together with their neighbors, joined the indignation rally on Wednesday at the headquarters of the Armed Forces’ Eastern Mindanao Command in Panacan. They also held rallies at the office of the Department of Justice and the Commission on Human Rights demanding for justice.

The family, together with three new witnesses, filed a “motion for reconsideration” before the Provincial Prosecution Office in Nabunturan, Compostela Valley at 9:00 am Thursday.

The new witnesses executed sworn statements before Atty. Janice H. Busque-Atienza, the associate prosecution attorney. Their statements that corroborated the family claim that there was no armed encounter that happened were contained in a “joint-affidavit” which is made part of the annexes of their motion.(with reports from John Rizle L. Saligumba/davaotoday.com)