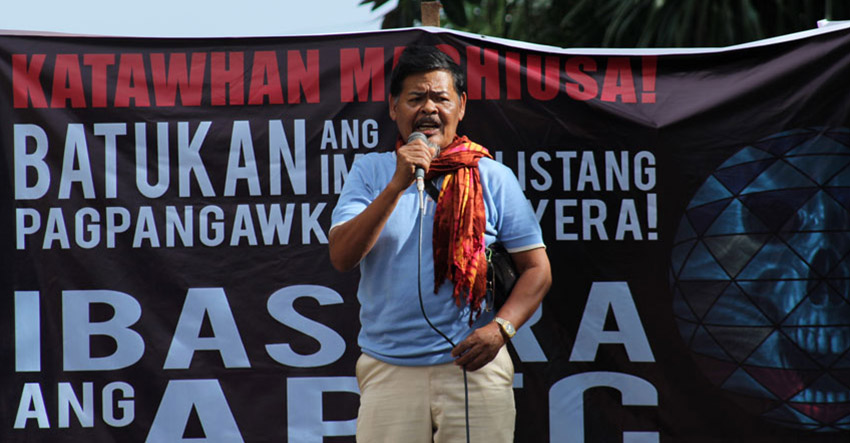 DAVAO CITY – The son of the head of the local farmers’ association in Compostela Valley is still missing after an assassination attempt early afternoon Sunday.

In a phone interview with Davao Today, Isabello Tindasan said they are still locating the whereabouts of his son, Noel, 31, after armed men fired at him.

Tindasan said his son was at a store in the highway when one of them approached his son and pulled a gun.

“Luckily, my son was able to jump by the roadside,” he said.

Tindasan said when his son jumped, four men ran after him and fired their guns toward his direction.

“They went to our house. Maybe they thought my son hid there,” he said.

Tindasan said they already reported the incident to the local police who later inspected their house.

He said his son is also an active member of the Compostela Farmers Assocation, which he heads.

Tindasan said in 2013, during the barricade of typhoon Pablo survivors  outside the Department of Social Welfare and Development, his son was “one of those beaten by the police”.

“He is really active in our campaigns because he knows what we are doing is for their own benefit,” said Tindasan.

Noel works as a small scale miner in the area.

Not the first time

But this was not the first time that Tindasan’s house was attacked by armed men.

In the afternoon of June 21, his 14-year old son was wounded after alleged soldiers fired at his house. His son sustained wounds from shards of the broken glass window. His wife and two-year old daughter were also inside the house when the firing happened.

An Army official, however, said the firing incident was done by the New People’s Army who“were positioned at the vicinity of Tindasan residence” and they “fired towards the patrol base.”

Tindasan was among the hundreds of protesters who put up a camp outside the Mines and Geosciences Bureau in Magsaysay (MGB), Davao City on Thursday. The farmers also joined the march rally against APEC from Freedom Park to Rizal Park.

MGB record shows that the Agpet was granted two exploration permits in Compostela town, to cover the villages of Nursery, Bango, Pulang Lupa, Mambusao and Kantigbaw, all located in Barangay Ngan.

The company’s permits cover one area in Compostela spanning 9,999.53 hectares, while the other area spans the boundary of Compostela and New Bataan towns with a total of 2,416.91 hectares. The area also covers Tindasan’s farms which is around five hectares.

Tindasan said, they are currently having a land dispute with a group of indigenous peoples led by a certain Guillermo Blanco who they call as “Lumad dealer” of the ancestral domain claim.

He said Blanco’s group applied for Certificate for Ancestral Domain Title (CADT) the National Commission on Indigenous Peoples gave the FPIC for the Agpet without consulting those who cultivate the land.

He said he believes the attacks against him and his family is meant to silence him from being vocal against the mining entry in Compostela.

“We will not just give up our lands because even before AgPet, we have been plowing the land all our lives,” said Tindasan. (davaotoday.com)