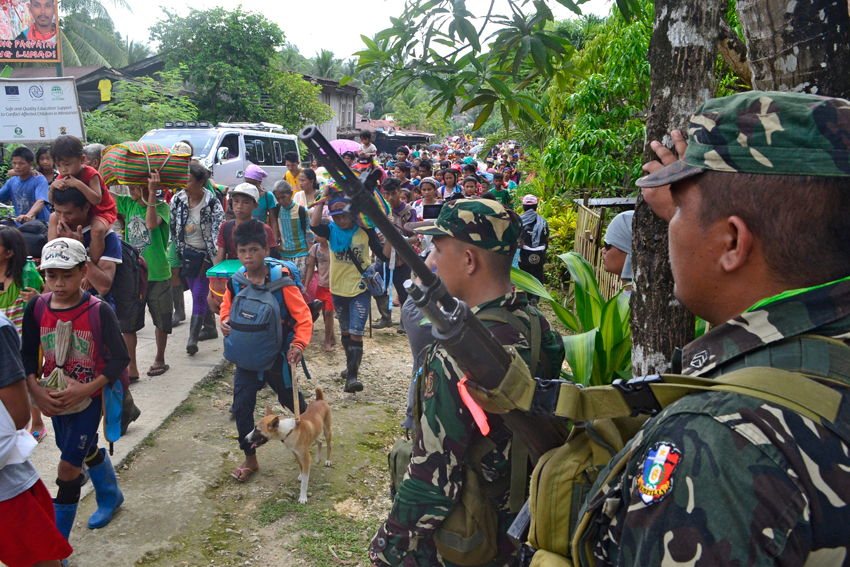 LIANGA, Surigao del Sur, Philippines – More than a thousand indigenous people from 15 rural villages in the municipalities of San Agustin, Tago, and Lianga, this province fled their homes on Monday, July 15, after a month of military encampment of their communities.

They called for the Armed Forces of the Philippines to pull-out its troops from their communities and dismantle Army’s detachments in Km. 9 Simowao, Barangay Diatagon.

Some 328 families or 1,607 individuals trekked for almost nine hours to reach the center of Barangay Diatagon here to seek shelter.

They are currently staying at the Barangay’s Gymnasium.

The evacuees were composed of 568 students and 48 volunteer teachers of Lumad community schools, Alternative Learning Center for Agricultural and Livelihood Development (ALCADEV) and the Tribal Filipino Program in Surigao del Sur (TRIFPPS).

Davao Today along with other media, accompanied the Lumad evacuees as they walked the remaining six kilometers towards the evacuation site.

Nelson Binungkasan, a resident of Km. 9 Simowao, Barangay Diatagon, said the military has set up a detachment near 50 meters away from their homes since June 14, conducting patrols around the community.

This, Binungkasan added, made the whole community fear for their safety as they experienced harassment and vilification by soldiers.

“We were not consulted that they (Army) will build a detachment near our community. The horrors brought by the massacre of our leaders in 2015 are still fresh in our minds,” said Binungkasan.

He added that schoolchildren were not able to focus on their classes as soldiers frequently roamed around their campus. 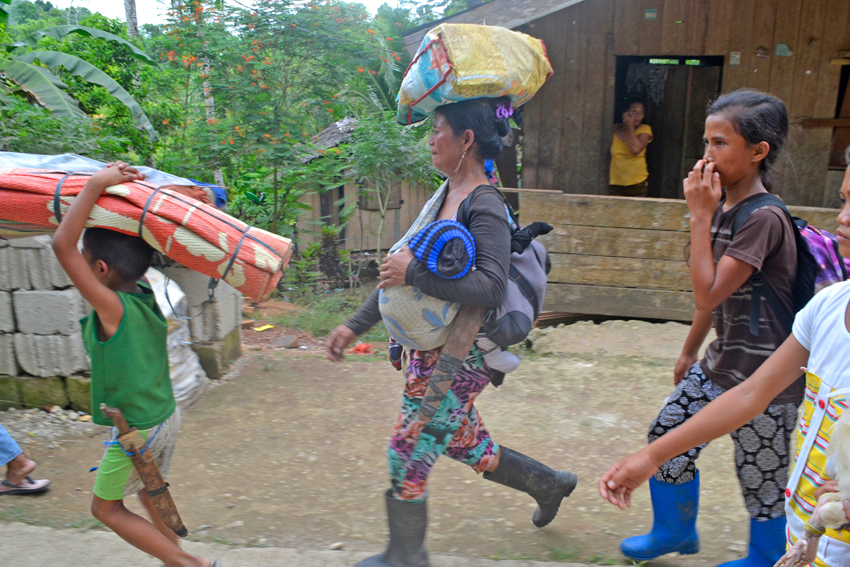 Marivic Bocales, a resident of Sitio Dikoy, Barangay Diatagon, was carrying her 11-month old baby while balancing a bag on her head.

Bocales said her whole village decided to evacuate as the nearby community of Km. 9 Simowao left to seek refuge. She travelled along with her husband and eight out of 14 children.

She said she was worried about the safety of her children with soldiers around their community.

She said they will be celebrating her baby’s first birthday at the evacuation center on July 21.

Meanwhile, 58-year-old Dalia Pedroso, a resident of Barangay Manduy-a, has the same reason with others when asked why she joined the evacuation, “I’m afraid soldiers will harass us if we opted to stay.” 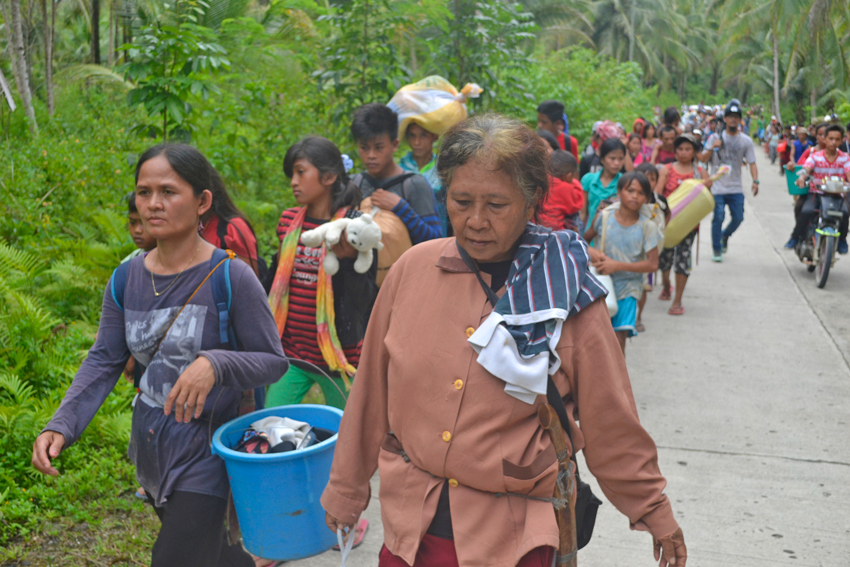 58-year-old Dalia Pedroso joins the evacuation with her relatives out of fear that soldiers will harass them if they choose to stay. (Mara S. Genotiva/davaotoday.com)

Pedroso recalled the fateful day of September 1, 2015 when ALCADEV Executive Director Emerito Samarca and Lumad leaders Datu Juvello Sinzo and Dionel Campos were killed by paramilitary groups in front of the community members including children.

She said the whole community has learned from their previous experiences so whenever soldiers stay near their homes, to evacuate is their only choice.

According to the Army’s Major Jerson Gloria, they have received “hearsays that the Lumad will evacuate because they are against the establishment of the military detachment.”

Gloria said “it is contrary to the clamor of Diatagon residents” and that the detachment was already approved by the Municipal Peace and Order Council (MPOC).

“Only few expressed that they do not want the detachment. Actually they look forward for it since other government agencies have pledge to pour projects in the area once it is built,” Gloria said in vernacular.

The Lumad communities pushed through the evacuation despite the Army’s earlier threat that they would file charges against “leaders and organizers” behind the evacuation. 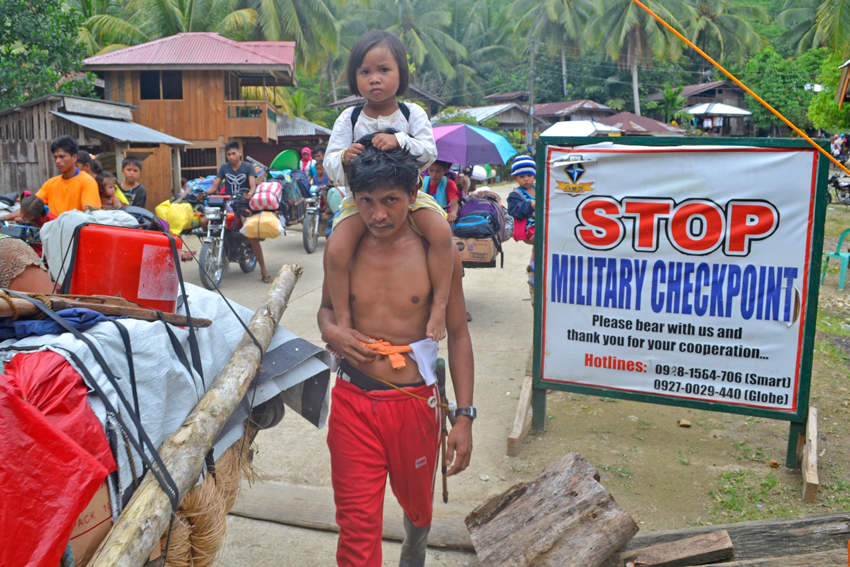 At least 328 families fled their homes after the military set a camp near their community since June 14. (Mara S. Genotiva/davaotoday.com)

KASALO Caraga spokesperson Femia Collamat said that during a dialogue with the provincial government last July 11 at the province’s capitol in Tandag City, Brigadier General Andres Centino of the 401st Brigade told the leaders of MAPASU that organizing an evacuation is a violation of Republic Act 9851.

This was also confirmed by Major Gloria who said they are currently investigating to identify individuals behind the massive evacuation, saying “there are people who agitated the Lumad.”

“If it is proven, criminal charges will be filed by the PNP,” Gloria added.

For his part, Binungkasan said the whole community decided to evacuate and everyone joined in their own volition.

This was the fourth time for the Lumad communities in Surigao del Sur to evacuate since President Rodrigo Duterte put the entire Mindanao under Martial Law last May 2017. (davaotoday.com)