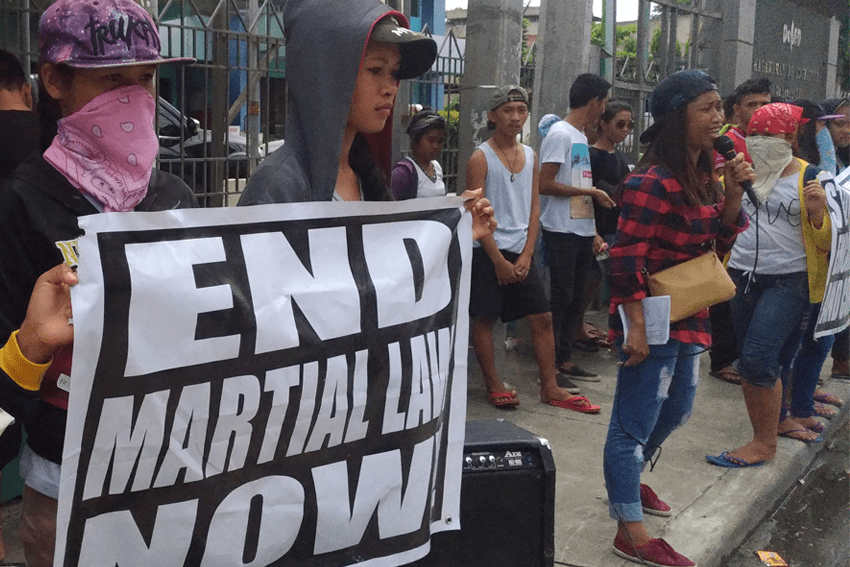 Lumad students hold a protest action outside the office
of the Department of Education Region 11 on Monday, July 3 to make the public aware of their grievances on the attacks by paramilitary. (Zea Io Ming C. Capistrano/davaotoday.com)

The teachers and students of two private schools catering to indigenous peoples in Davao region are in the city to raise their concern on attacks experienced by their schools from alleged members of the military.

Milagros Tan, school administrator of Misfi Academy said they are using what they call as an “emerging curriculum” which aims to continue the education of the children displaced by conflict.

“The emerging curriculum is used during emergency where students who evacuated hold classes wherever they can. Teachers hold classes under a tree or in a gymnasium or barangay hall,” Tan told Davao Today in an interview Monday, July 3.

Tan admitted that holding classes along the highway is disturbed and interrupted by the noise and the environment.

“Ang learning sa bata, dili nato maingon nga fully nila maintindihan kay disturb. Dili kaayo nila 100 percent makuha ang learnings. Pero disturbed sila in the sense nga trauma sila sa ilahang naexperience diha sa pag-atake sa mga schools (The children’s learning is disturbed. They cannot get the lessons 100 percent. They are disturbed in the sense that they are traumatized by the experience they got when their schools are attacked),” she said.

But Tan said their main objective is to continue the student’s learning despite the circumstances. She said it is more difficult if children will stop their schooling.

Tan said teachers of Misfi cannot go to the campus in the community because paramilitary forces under the “Alamara” are threatening to kill them.

Since the opening of classes, Tan said the campus in Sitio Muling, Barangay Gupitan in Kapalong has not yet resumed its operation due to threats.

“All our campuses have already resumed classes last June 1 but our campus in Muling is not yet operating because the Alamara threatened they will kill the teachers who will go there even if we have permit to operate issued by the DepEd,” she said.

Miguel went to the Department of Education in Region 11 along with Tan and other teachers to seek help from the DepEd on Monday.

Miguel said he believes it was his “eighth time” of going back to the DepEd to raise the concern of the threats in their school. But the DepEd referred their case to the Division Superintendent adding that the concern of rights violations is not within their mandate.

DepEd Region 11 Spokesperson Jenielito Atillo said there should be other locations provided for the students where they can hold their classes.

(If the allegations are true that there are harassments then there should be other places where the students and teachers can hold their classes, not along the highways, not on the streets.)

Atillo said holding classes along the highway would only put the lives of the children at risk.

“To my mind, the cure is worse than the ailment. There are a lot of ways to respond appropriately to their demands,” he said.
Meanwhile, Miguel said they hope DepEd will issue a stand regarding the attacks they experienced.

“We want to hear what DepEd would like to suggest,” he said.

Miguel said if the students and teachers’ lives are not at risk, they will not be in the city to air their grievances and continue the children’s classes.

“I know holding classes along the streets is unnecessary, but where else would we go?” he said.

Atillo said they hope the issue will be addressed immediately by the concerned agencies including the Philippine National Police, the Armed Forces of the Philippines, and the Commission on Human Rights, so that the students can continue their education in the community.(davaootoday.com)