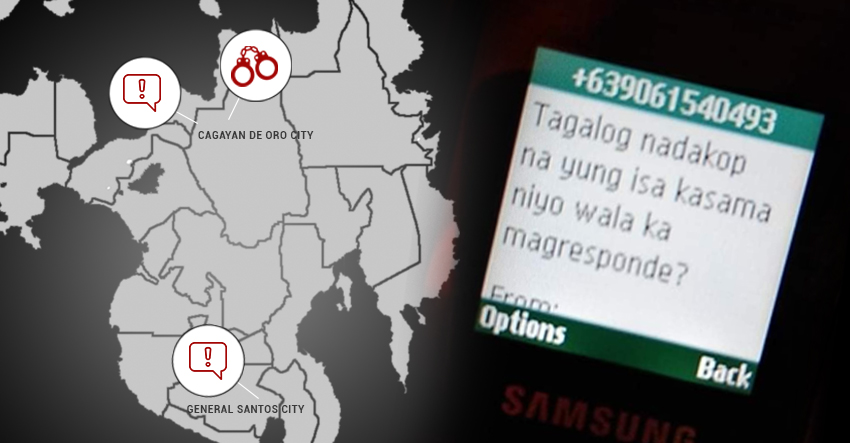 DAVAO CITY, Philippines – The recent threats and attacks that targeted a missionary worker, a volunteer teacher, and two human rights defenders has raised a serious concern over the safety of individuals working in progressive organizations that are critical to the government.

All these attacks have been met with a series of protests from human rights groups, peace advocates, branding the spate of attacks as a calculated move of the government to gag the critics of President Rodrigo Duterte.

The latest victims were a lay worker in Northern Mindanao and a Lumad school volunteer teacher in Soccsksargen who reportedly received threats from what they believed to be military agents.

On Tuesday, the Rural Missionaries of the Philippines-Northern Mindanao Sub-Region (RMP-NMR) said that their missionary worker has received a threat through series of text messages from an unknown number.

Below are the text messages:

“Tagalog, one of your colleagues (kasama) has been arrested, aren’t you going to respond?’ the text read.

The unidentified sender referred the lay worker as “Tagalog.”

“Why did you even go to Mindanao? You are Tagalog and should not have meddled here. You are quick to make enemies.”

The sender also implied that he knew about the worker’s whereabouts. “You have been missing here in Cagayan Tagalog ha ha ha.”

It was followed by a message accusing the lay worker of having involvement with the communist rebels. “Tagalog, if you want to join the media, just don’t do it with the NPA.”

“We call on the faithful to lend their support in calling out these types of harassment and intimidation against human rights defenders. Let us continue the good fight in supporting each other against the enemies of truth, peace and justice,” said Cupin, condemning the threat.

Meanwhile, a volunteer teacher of a Lumad school operating in Soccsksargen also received a threat from an unidentified caller last Friday.

Association of Community Educators (ACE), an alliance of teaching and non-teaching personnel of Lumad schools in Mindanao reported that John Thimoty Romero, program coordinator of Center for Lumad Advocacy Networking and Services (CLANS) has received death threats from a caller.

According to Geming Andrea Alonzo, ACE-Soccsksargen regional coordinator, Romero received a call from phone number +639756128611 on noon of February 8, saying he has knowledge about his work routine and whereabouts.

The unidentified caller told Romero, “It would be a shame to kill someone as smart as you. If I wanted to, I could kill you at any moment.”

The caller also mentioned that he knew about Romero’s involvement on the protest camp fronting the Department of Education Region 12 office in Koronadal City July last year.

The protest was set by Lumad school teachers, students and their parents demanding DepEd to release the schools’ permit to operate.

READ: No reason for Lumad schools to shut down, CLANS officials assert

Alonzo said the incident was part of the “continuing attacks” against Lumad schools in Mindanao red-tagged by the military.

“ACE strongly condemns the death threat on Romero, as it signifies the continuing attacks on teachers and parents supporting the independent Lumad schools who champion the right to education,” Alonzo said.

She added that harassment and threats have intensified with the extension of martial law early this year.

As program coordinator, Romero is in charge of the school’s programs in education, health and sustainable agriculture in remote Blaan and Tboli communities in the region.

Romero remained unfazed despite the threats and continues to serve and provide education to indigenous peoples, he added.

A fact-finding msision led by Save Our Schools Network (SOS) last July 2018 recorded 225 cases of attacks against Lumad schools that affected the operation of 36 schools run by CLANS.

In February 2018, CLAN’s teacher Jolita Tolina was arrested at her home in Kalamansig town for her alleged involvement in an ambush by the NPA rebels against the Marines in 2017 that left one soldier killed. Tolina is curently detained at the police jail in Isulan town. (davaotoday.com)