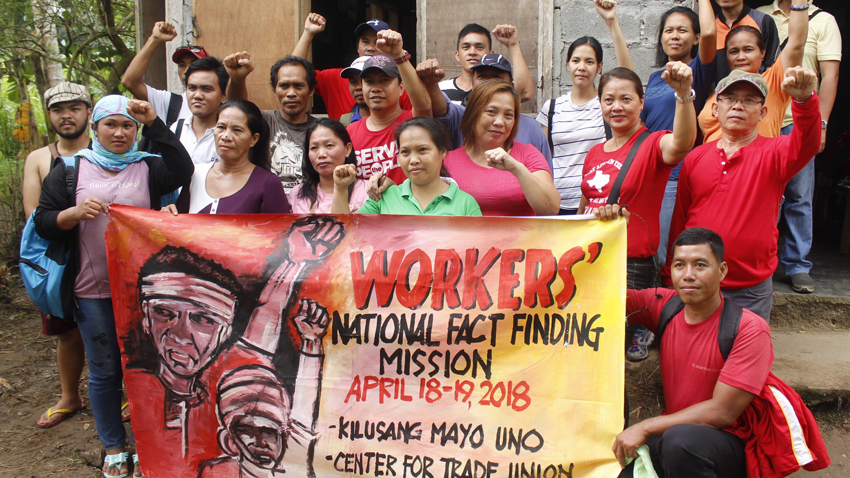 Banana plantation workers of Sumitomo Fruit told the NFFM held on February 18-19, that the violations intensified after eight KMU-affiliated unions of Sumifru Philippines submitted a proposal for a collective bargaining agreement (CBA) to the management.

The NFFM documented 286 human rights violations involving cases of coercion, displacement from their homes, harassment, intimidation, illegal entry into their houses and planting of fake evidence.

Eliazar Diayon, chairperson of MAPARAT Montevista Workers Union said that soldiers falsely accused the workers as front liners of the New People’s Army (NPA), and forced them to surrender.

“We were questioned by the Philippine National Police and the 66th Infantry Battalion (of the Philippine Army) after sending us letters to appear in the barangay. Soldiers told us that union dues were being used in the purchase of guns for the NPA,” Diayon said.

He asserted that the union dues are used for union-related activities.

The authorities also wanted workers to join in the management unions rather than in KMU-affiliated unions, he added.

KMU pointed out that the clear intent of these human rights violations was union busting.

The Department of Labor and Employment (DOLE) Region XI in its report to Undersecretary Joel Maglunsod said, they invited the Philippine Army and the Commission on Human Rights (CHR) in a Regional Tripartite Monitoring Body meeting to discuss the NFFM results.

The report stated that the AFP was conducting barangay visitations under the Community Support Program.

According to the 10th ID spokesperson Capt. Jerry Lamusao, the FFM can immediately file cases “if they deem it necessary and or they have the probable cause to do so.”

“The unions are not harassed. Instead, our units have actually rescued these workers when they sought refuge to the Army after NPAs deceived them to go against their employer,” he said.

He added that the 10th ID is not against unions because it is permitted under the Constitution.

“There are just people running it to destroy companies that brought jobs to the community,” he said.

The CHR Region XI was said to have told the concerned parties should be invited in the Regional Tripartite Monitoring Body (RTMB) to immediately resolve the allegations.

The RTMB agreed to conduct a community dialogue.

Carlo Olalo, KMU-SMR secretary general said that despite the threats, they will continue to support Sumifru union members in their goal of obtaining a CBA that ensures fair wages and job security for all its workers.

The Center for Trade Union and Human Rights showed an increase in the number of cases of threats, harassment and intimidations towards workers and the urban poor. From 88 in former President Noynoy Aquino’s six-year term, the figures rose to 500 during the first year of President Duterte’s term.

There were 21 reported killings of union members, 602 documented cases of assaults in the picket lines of workers and 86 arbitrary arrests and detentions. (Arniemee V. Nudalo/davaotoday.com)