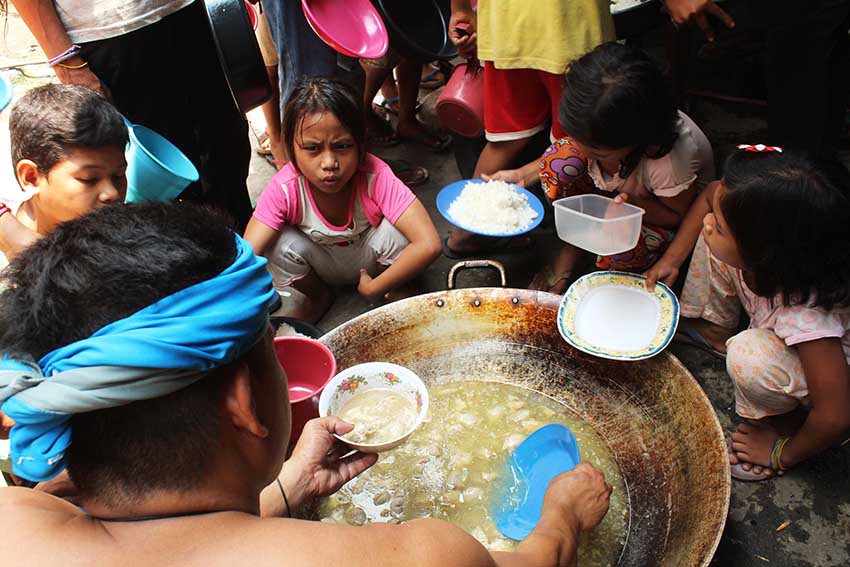 Lumad children get their share of food at the kitchen inside the evacuation camp in the United Church of Christ in the Philippines Haran compund.(davaotoday.com file photo by Medel V. Hernani)

Piya Macliing Malayao, secretary general of Katribu said indigenous peoples’ communities have been victimized by destructive projects “such as mining and intense militarization” under the administration of President Benigno Aquino III.

“With these, hundreds of Lumad remain in evacuation centers. Even during the campaign and election period, indigenous communities have been dissuaded from voting progressive partylists through harassment and intimidation campaigns by the military,” she said.

Duterte has issued a ban on mining activities in Davao due to the destructive impact it brought to the environment.

The President-elect also figured in an exchange of words with North Cotabato Rep. Nancy Catamco regarding the issue of the evacuation of indigenous peoples at the Unite Church of Christ in the Philippines compound.  Duterte told Catamco that the problem concerns “ideological” issues.

Malayao said “Duterte has a record of understanding the plight of indigenous peoples and their concerns on some specific issues.”

“However, we would like to remind him that his recent policy pronouncements regarding allowing full foreign land ownership and ‘responsible mining’ is dangerous to our communities. These have been brandished in different IP communities all over the world and have exacerbated land grabbing of ancestral domains and state terror for those who resist,” she said.

“Of the 90 victims of extra-judicial killings, 75 are Lumad leaders, women and children.”

Katribu said they hope Duterte would stop the practice of killing indigenous leaders who are vocal against destructive projects in their communities.

“‘We challenge president-elect Rodrigo Duterte to steer away from being the same monster that (Pres. Aquino) was. He needs to live up to his promise of ‘tunay na pagbabago’ and stand for the rights of indigenous people all over the country,” said Malayao.(davaotoday.com)