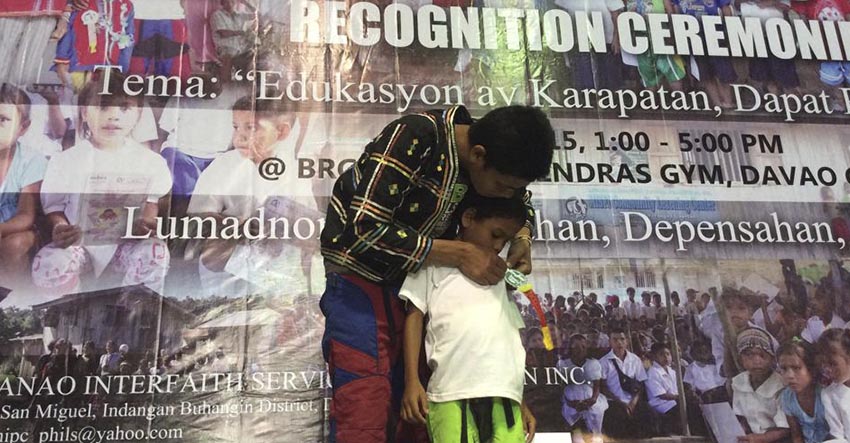 Crispin Subla pins the ribbons to son, Miguel who will be entering Grade 1 this school year during the moving-up ceremony of Misfi Academy held here on Monday. 52 students had to travel for several hours just to attend their recognition rites allegedly because a paramilitary group refuses the school’s operation. (Photo contributed by Glades Jane Maglunsod)

Parents and students as young as five years old traveled from Sitio Muling, Brgy. Gupitan to Davao City by 6 am on Sunday and reached here by 11 pm, a school staff said in describing how far the community school is.

“Tibuok adlaw sila naglakaw kay gabii sa Domingo na man sila niabot diri (They walked the whole day because they arrived here Sunday night),” Education Program staff Junance Magbanua said, adding that the group Save our Schools Network and the Alliance of Concerned Teachers had to fetch the students and the parents from Laak, Compostela Valley to travel to Davao City.

Magbanua said the whole family of a student, including infants had to travel for several hours.

On March 27, the supposed schedule for the “moving up” ceremony of the students was reportedly cancelled due to the paramilitary group, Alamara’s refusal to hold the recognition rites in Sitio Patil, Brgy. Gupitan.  A student said Sitio Muling is a two-day walk from Sitio Patil. The fare in a single motor is P1,000 for a one-way trip.

Magbanua said the Parents-Teachers Association of the school discussed and decided to hold the recognition rites here.

Meanwhile, only 52 students of the total 131 enrollees who finished the school year 2014-2015 in Sitio Muling were able to attend the ceremony as other students are still travelling from their villages.

One of the school’s outstanding student, Alvin Malibato, 17 years old and an incoming Grade 6 student said they are unsure if they can still finish their studies as teachers of Misfi Academy are barred by the Alamara from entering the community.

Alvin received five awards including Best in Filipino, Best in Science, Best in Mathematics, Best in Makabayan, and Best in Spelling. He also gave a speech during the program on Monday.

Alvin said that even students like him are afraid of the Alamara.

Alvin said that if they know how to speak up, the Alamara would suspect that they were taught by the NPAs.

“Kung maayo mi manubag sa ilaha ingnan mi nga gitudluan mi sa NPA (If we know how to answer back at them they would say that we were taught by the NPAs),” Alvin said.

He said he plans to be a teacher when he graduates.

Read related story: Ata-Manobo students: We only have pens and papers for our dreams

Save our Schools Network spokesperson Rius Valle said teachers have been “maliciously tagged as teachers of the New People’s Army,” and  “that the children will grow up to become rebels if they continue to study in these alternative learning schools.”

Aside from Kapalong, alternative learning schools in Talaingod, Davao del Norte have also been attacked by the Alamara.

“In Sitio Tibukag, the military dug foxholes in between the Salugpungan school and the DepEd school. The otherwise peaceful area has been transformed into a warzone as group of soldiers from the 68th IBPA and the Alamara have stayed in the barangay hall and DepEd school in the area,” Valle laments.

Valle said that these schools are in danger of not opening for the upcoming classes, due to the efforts of the military to drive the students away.

In a text message, 1Lt. Vergel Lacambra, chief of the 10th Infantry Division’s public affairs, said they support the delivery of social services such as education to communities.

“Proper education that abides by the guidelines set forth by the Department of Education,” Lacambra said.

Board of Trustees member, Danilo Gumanao, said they will “exhaust all means so that the operation of the school will continue.”

Gumanao said the local government of Kapalong will have a dialogue with the school board.

The Alliance of Concerned Teachers said that they blame DepEd-National “for inaction on this concern.”

Benjie Valbuena, National Chair of ACT said schools like Misfi Academy “were people’s initiatives that must be protected by concerned agencies, but then DepEd have been sitting on these issues for a long time already.”

“DepEd could have used those precious funds to build more school and hire more teachers, especially for indigenous children, and drive away military and para-military forces away from those schools,” Valbuena said adding that the children deserve to be in school. (davaotoday.com)