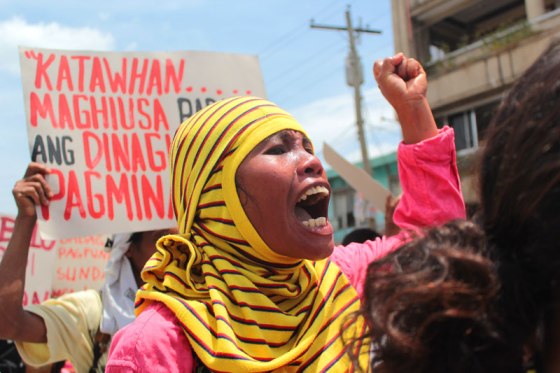 Compostela, Compostela Valley — More than six months ago, they trekked from Typhoon Pablo-ravaged areas and, in a crippling barricade at a national highway, slammed government welfare agencies for neglecting them.

Now, the same members of the indigenous tribes of Mangguangans, Mandayas and Matigsalug have bonded once again, this time to oppose the entry of gold mining and military abuses in a ritualistic protest march at the town center Thursday.

The tribes along with small-scale miners and farmers opposed the entry of Agusan Petroleum and Minerals Corporation (AgPet), an affiliate of the Cojuangco-owned San Miguel Corporation that acquired an exploration permit that encroaches disaster rehabilitation areas here.

Mayor Lema Bolo dismissed the complaints against the military saying she could not ban soldiers from occupying communities because Oplan Bayanihan as a program against the New People’s Army (NPA) is a national policy.

Last week, some indigenous leaders went to Davao City to lobby against the mining operation and slam the current “militarization” in the area.

Karlos Trangia, spokesperson of Barug Katawhan which first grouped last February against the social welfare department’s ineptness in its relief work, considered the mining operation as “legal land grabbing” that will dislocate residents.

Lantao also said that the mining operation makes it easier for the military to occupy areas that would make residents vulnerable to human rights abuses.

She and other leaders well know what military operations meant. Data furnished by Karapatan showed various cases of abuses perpetrated by government forces in Barangay Mangayon and adjacent villages in Compostela back in 2008.

The 60th Infantry Battalion troops allegedly burned the elementary school and purok (village hall) and uprooted the farmers’ rootcrops because the troops said these would only be fed to the NPAs. They held off trucks bearing logs, arrested its occupants and brought them to Monkayo town police station where the civilians were forced to eat chili pepper.

Soldiers also allegedly committed hamletting and food blockade by preventing farmers from going to their farms and controlling entry of food supply in the area. “They also burned the house of one Jony Bukenlasan, and accused as NPA commanders ordinary farmers Baludoy Florentino, Elpidyo Cojeo and Ocampo Adlawan. The troops stole chickens and killed a water buffalo and a horse,” the Karapatan factsheet also noted.

Worse among the abuses included “the killing of civilian Lauro Anulaw who was finished off at the head, and wounding of other residents Sanny, Kaloy, Ricky and Danilo,” said Karapatan. The group also lambasted soldiers for exploiting local women and spreading illegal drugs.

During the military operation, soldiers used as guide the village chairman Oraya. When they arrived at a farm hut, they pounced upon one Joel and his five kids who were sleeping; they placed a firearm beside Joel to make it appear that he was an NPA rebel.

On the way back, soldiers met other civilians who were carrying sacks of rice. The troops accused them of bringing rice to the NPA. In a fit, soldiers mauled the civilians; one of them reported later how his head was wrapped in a plastic while he was knocked to the ground. The troops also forced one Weny Daniin to his knees and threatened him with a blade on his neck.

The paper stated an amount of rewards depending on the kind of gun surrendered to the military.

Lantian said no one came forward to surrender for they only have bows and crude hunting tools like bangkaw and bolos.

Leaders also said that most of the residents have not yet fully recovered from Typhoon Pablo.

Agpet exploration permit covers at least 12,414 hectares in the villages of Ngan, Pansalan, Puting Bato, Side4, Mangayon, and some parts of Sitio Bungkilaton.

Datu Mambay-an also criticized the National Commission on Indigenous People (NCIP) for endorsing the exploration permit of AgPet without consulting the residents.

He also took a swipe against the NCIP for not lifting a finger to help them after Typhoon Pablo.

In Thursday’s protest march, the tribes came together and made a unity pact or what they call the “tampura” by forming a circle, prayer, and the slaying of the red rooster with the head thrown towards the municipal hall. They later declared a “pangayao” (tribal war) or a traditional war waged by tribal warriors.

For Trangia of Barug Katawhan, the “tampura” is a historical event that showcases the unity of the exploited people to fight off large-scale mining and their private army, the Armed Forces of the Philippines.”

“We will continue to stand our ground until our last breath to defend our land and life. AgPet – SMC in cahoots with the Aquino government will destroy our lands, our life for good. This, we shall not allow to happen,” added Trangia. (Earl O. Condeza, davaotoday.com)