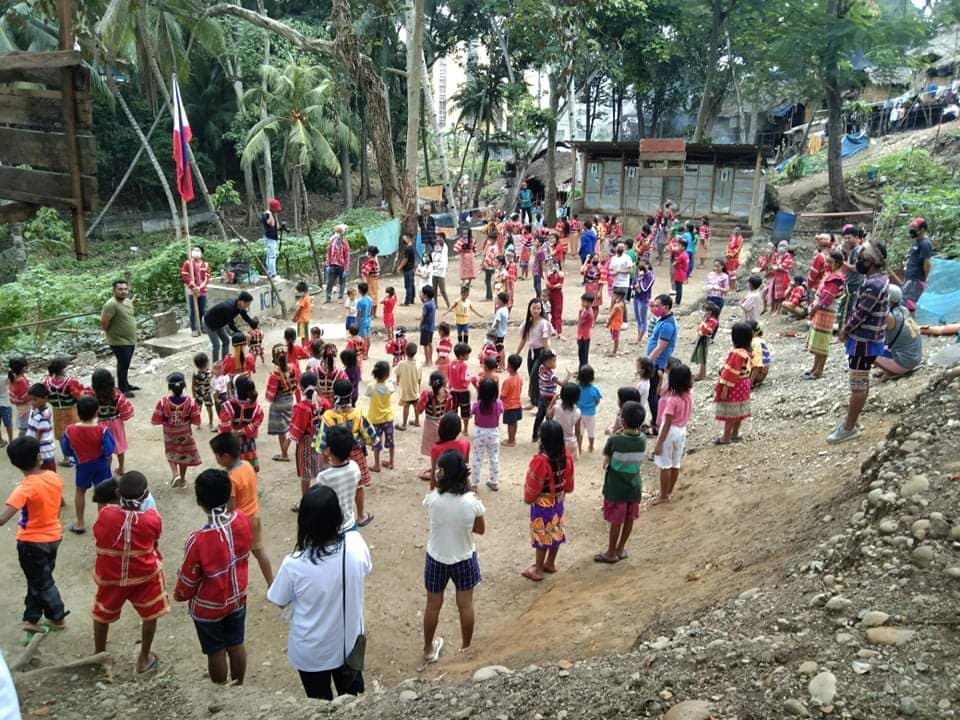 DAVAO CITY, Philippines – A group of Manobo evacuees seeking refuge inside the United Church of Christ in the Philippines (UCCP) Haran compound decried on the repeated accusations of the National Task Force to End Local Communist Armed Conflict (NTF-ELCAC) that ‘’bakwit schools’ train child warriors and earn profit from taking shelter in the cities to expose their plight in the communities they temporarily left behind.

In a press conference at UCCP Haran compound, Bishop Hamuel Tequis of UCCP told the media Wednesday morning, February 24, that sheltering the lumad at Haran is bereft of abuse and child trafficking contrary to the continued NTF-ELCAC’s spiel against them. The task force accused the UCCP for raking in donations from abroad through trading the plight of the lumad.

Bishop Tequis is one of the personalities charged with kidnapping and human trafficking as the Lumad’s have been taking shelter at UCCP Haran for more than five years now. He has been red-tagged together with some Lumad leaders. Tarpaulins with their names and faces printed on it tagging them as communists were posted in several areas in Davao City.

“The Church’s mission is to help the marginalized and the oppressed such as the Lumad. It is sad that we are being persecuted for doing God’s mission,” said Tequis.

Government authorities made several attempts to disperse the lumad at Haran, but failed.

Davao del Norte Governor Edwin Jubahib in a press conference on February 23 said that he had a talk with Bishops Tequis and Modesto Villasanta and Jong Monzon of PASAKA on January 25, 2020 asking them to send home the Manobos back to Talaingod citing the alleged illegal operation and custody of the Manobo families and children at Haran.

“They are just using the Lumads in their [church] activities to request for overseas funding.They also used the IPs from Talaingod and other provinces to attend rallies on the streets,” said Gov. Jubahib.

Also at Haran press conference on February 24, Salugpungan scholar Rurelyn Mandacawan told Davao Today that they don’t want to remain uneducated as learning is vital in empowering her tribe as she said, “We want to become teachers, nurses, doctors, and lawyers because these are what our tribe needs. If it is true that we are missing, we could not communicate with our parents and they could not send us our allowance while staying here at this ‘’bakwit Salugpungan school.’’

Datu Tungig Mansimuy-at, spokesperson of Salugpungan Ta Tanu Igkanogon, said that they have come to the city with the help of UCCP and schools to fight for their rights especially the education of their children.

The group said the Department of Education (DepEd) accredited its Salugpungan Ta Tanu Igkanugon Learning Center in 2007 to strengthen their quest to protect their ancestral land, the Pantaron range, and their right to self-determination.

The Salugpungan said they were forced to leave their communities because of the closure of their Salugpungan schools in 2019 and and the continued harassment and militarization by the military and paramilitary group Alamara left them no option but evacuate and establish the “bakwit schools” to continue their children’s education.

In a phone interview on February 20, Maymay Anlomon from Talaingod, Davao del Norte, told Davao Today that she frequently spoke with her child over mobile telephone calls prior to the controversial “rescue operations” conducted at the retreat house of the University of San Carlos (USC) in its Talamban campus in Cebu City on February 15.

Anlomon recalled that even at the Salugpungan school in Talaingod—which the government shutdown in 2019, the parents visited their children on regular basis.

“They [teachers] have not taught anything to our children apart from reading and writing. Nothing else. I haven’t seen their teachers owning a weapon,” said Anlomon.

Anlomon gave consent to her 14-year-old child to travel to Cebu and join with the ‘’bakwit school’’ along with the other Lumad children.

“We want to contact our children. It’s been several days already. We could not sleep well at night worrying for their welfare after we saw the incident on TV where they were screaming and crying,” said Anlomon.

For more than 24 hours since the arrival of the 13 lumad students under 18 years old at Francisco Bangoy International Airport on the evening of February 21, the parents of the seven students who did not give their consent to transport their children back to Davao City were anxious and worried as they didn’t hear any information about their children.

On February 21, these parents sought assistance from the Children Legal Bureau (CLB), a Cebu-based legal assistance group helping children from neglected communities, to stop sending back their children to Davao City without them. But CLB failed to halt the travel. CLB has been assisting these lumad children since the police took custody of them after they were extracted from their shelter at the USC retreat house.

Lawyer Noemi Truya, CLB deputy executive director and spokesperson, said the authorities responsible of carrying out the operation did not handle it with the best interest of the children in mind. As of February 22, Truya said none of the seven parents who approached CLB met with their children at the airport in Davao City.

The NTF-ELCAC told the public in its press conference on Tuesday morning, February 23, that the 13 lumad students are quarantined in a COVID-19 facility in a barangay in Talaingod where they reside before they can set foot in their houses again. 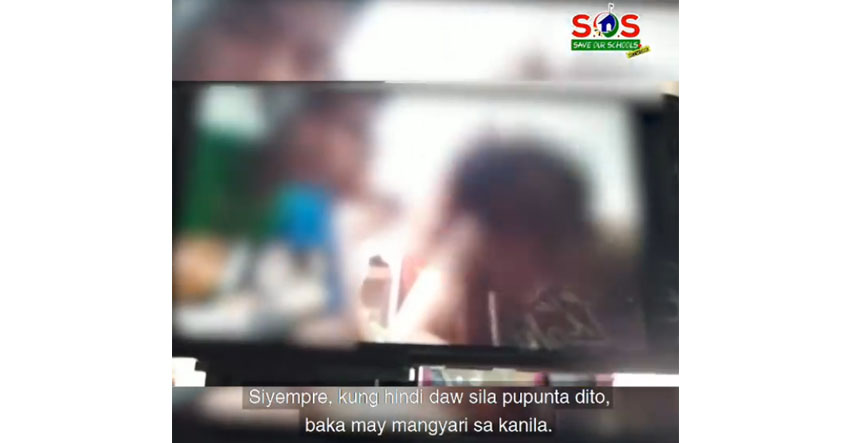 Screenshot from the video released by Save Our School Network

The Save Our Schools (SOS) Network posted two videos on its Facebook page. These were the conversations between an SOS staff and the students who divulged that their parents were allegedly coerced by police authorities who frequented their communities and threatened their parents if they refused to fetch their children.

“Napugos ra gyud ang among mga ginikanan, Sir sa pag-ari nila diria… kung dili sila moanhi diria sa Cebu, basin naa’y mahitabo sa ilaha (Our parents were forced to come here [to Cebu], Sir… if they don’t come to Cebu, something might happen to them),” one of the students said in a discreet interview over mobile telephone.

In the second video, the students accused the police of twisting their (lumad) statements despite asserting their truth.

“After ato… akong mga kauban nang-isturya na pud pero kana. Ginabali mi nila. Nya after ato kay gikasab-an ko atong isa ka pulis. Iya kong gi-ana ana, gitudlo-tudlo ko niya tapos timan-an daw niya akong nawong (After that… my fellow students spoke out. They [the police] twisted what we said. After that, I was reprimanded by one of the police. He repeatedly pointed at me and said he’d remember my face),” another student added.

The students disclosed that they were heavily guarded while on police custody; talking with fellow students inside the pension house was prohibited; and their cellphones were confiscated.

The Human Rights Watch (HRW) in its statement said the police raid is just the latest in a string of violent incidents targeting indigenous communities and their schools in recent years. The indigenous groups accused the government of driving tribal people out from their communities to facilitate entry of mining and other extractive industries into their ancestral lands.

HRW said the military operations that often occur in these areas result in horrific abuses. Tribal leaders have also been targeted in politically motivated killings. The HRW has urged the government to stop harassing the IPs with baseless allegations and release those wrongfully arrested in the raid and ensure the children are reunited with their families.

Meanwhile, the Indigenous Peoples Rights International (IPRI) on its FB page denounced the apparent ceaseless attacks against the IPs in this difficult time when the Filipinos, especially the marginalized sectors like the IPs, are grappling with the impacts of COVID-19 pandemic and caught in the world’s longest lockdown. “These attacks are obviously contrived and organized as part of the anti-insurgency program of the government. Unfortunately, indigenous peoples are among the most affected from the State attacks.’’

Philippine National Police (PNP) Chief Debold Sinas spoke to the children on February 19 and told them they were kidnapped and trafficked by their community teachers. Sinas assured the parents that they will get support from the NTF-ELCAC.

In a press conference with the NTF-ELCAC on February 23, local officials claimed the parents sought help from the local government of Davao del Norte to locate their ‘’missing’’ children who left their communities since the closure of the Salugpungan schools in 2019.

Gov. Jubahib revealed that the Office of the Presidential Adviser on the Peace Process (OPAPP) funded the 600 houses for the Manobos in Talaingod town through the National Housing Authority (NHA) and a budget of P11.5 million.

Gov. Jubahib said the funds from the NTF-ELCAC are undergoing program of works before the bidding starts for priority barangays qualified for the task force’s development project. The task force has allotted huge chunks of its funds in Davao region ranking it number one among the regions in the country.

But Lorena Mandacawan of Sabokahan, a lumad women group, said the local government authorities are building houses and schools as part of enticing the lumad to return to Talaingod.

“We have evacuated here to continue our education and left the peace and comfort of the mountains. They [LGUs] failed to protect us from the military and the Alamara while they continued to allow these state forces to disrupt our school and sanctuary,” said Mandacawan.

The Manobo evacuees urged local government officials to stop the red-tagging, re-open the Salugpungan schools, and drop the trumped up charges and release the seven individuals arrested in Cebu. Two of datus from their tribe are charged with kidnapping and trafficking the lumad students. (davaotoday.com)