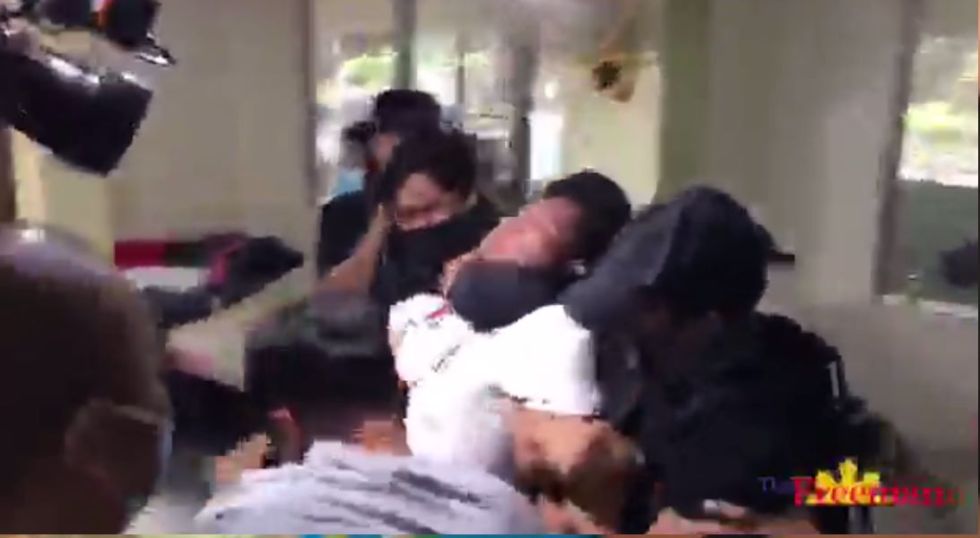 (Screenshot from a live video from The Freeman News)

DAVAO CITY, Philippines – Police and social workers in Cebu on Monday took custody of 21 Lumad students and arrested tribal elders and school teachers from their “Bakwit School” in the University of San Carlos Talamban campus, claiming this was a “rescue” from a rebel training school.

Lumad groups and their advocates including the USC administration condemned the police for intimidating the schoolchildren who have long suffered from state harassment in their ancestral community in Talaingod, Davao del Norte.

News footage from Cebu showed the actual incident, where armed police officers along with staff of the Department of Social Welfare and Development (DSWD) from Region 7 arrived at the USC campus around 11 am on February 15. The DSWD staff went into the room where the students were staying and told them they have accompanied their parents who wanted to bring them back to Talaingod.

What ensued next was confusion as students began screaming when they were forced out of the room. Teachers and tribal elders who were trying to appease the situation were dragged out by police and handcuffed to the ground.

No search or arrest warrants

Lawyer Anthony King Perez of the National Union of People’s Lawyer (NUPL) and Children’s Legal Bureau in Cebu told Davao Today that the police did not have arrest or search warrants when they seized the lumad and the teachers based on his team’s initial investigation while no charges have been filed to the 26 persons (16 children, 6 adult students, 2 datus, and 2 teachers) as of Tuesday.

Atty. Perez and his team waited at the police regional office for four hours hoping to see his clients on Monday night.

‘’We have not seen them. We will be visiting Police Regional Office-7 again this morning to access and visit them. We are also fully aware of the 36 hour period for them to file the cases,” Perez said.

But during the “rescue” incident, Datu Benito Bay-ao, a tribal elder in charge of the children’s affairs, was interviewed by The Freeman saying that the students were not forced to join the Bakwit School and that the parents also knew about their situation. He also added that they cannot leave the Bakwit School in Cebu because of travel restrictions with the COVID-19 pandemic.

The Philippine National Police later released a news brief claiming 21 Lumad minors were identified as “lumad warriors” brought to Cebu City to undergo “revolutionary training as future armed combatants “ and claimed that the students were being recruited by community organizers in Davao del Norte.

“Initial investigation disclosed that the Lumad children who belonged to the then NPA-front Salugpungan School in Talaingod, Davao del Norte that was closed down by DepEd in 2019 were brought to Cebu away from their parents who sought the local government of Davao Norte for assistance to locate their missing children for more than two years since,” the PNP brief said.

The PNP brief cited possible cases of serious illegal detention, human trafficking, and charges for violations of the International Humanitarian Law as well as Special Protection of Children in Situations of Armed Conflict against the arrested suspects.

The Lumad evacuees in UCCP Haran in Davao also rebuffed the police’s rescue narrative and the red-tagging of their school.

Lorena Mandacawan, spokesperson of the Sabokahan Unity of Lumad Women, clarified that the Lumad students have been in Cebu as part of the Save Our Schools campaign where universities have opened their campuses to help the Lumad continue their schooling despite the pandemic and the militarization in Talaingod.

“Our children were forced to conduct Bakwit Schools in Cebu and Manila to continue their education as they are really looking forward to finishing their studies. The Bakwit school is a form our children’s struggle to right to education because back in our communities, our schools, their teachers, and we lumads are always under attack,” Mandacawan said.

READ: A timeline of the birth and attacks on Salugpongan schools

The Salugpongan community schools and its 55 campuses in Davao Region, supported by non-government and religious organizations to provide education for the Lumad, were closed by the Department of Education after allegations were raised by the National Task Force to End Local Communist Armed Conflict (NTF-ELCAC) that these were “rebel schools.”

Mandacawan recalled there had been similar “rescue operations” conducted by authorities in their sanctuary in UCCP Haran in 2015 and 2020 where the paramilitary Alamara, known for harassing teachers and students, also joined and barged into the Haran compound.

“Based on our experience, this so-called rescue only resulted in serious trauma and fear, especially to our children. We seek refuge because back in our community there are cases of harassment, threats to our life and our ancestral domain. Worse we are tagged as NPA by the military that entered our community,” Mandacawan said.

A joint statement from the Archdiocese of Cebu the SVD Philippines Southern Province which administers the University of San Carlos said they were “surprised” about the rescue operation inside the campus.

“No rescue need ever to be conducted because the presence of the lumads in the retreat house was for their welfare and well-being, and all throughout, they were nurture, cared for, and treated with their best interest in mind,” their statement said.

The school explained that the students were sheltered in its retreat house, providing the accommodation and allowed the Bakwit School to use the facilities for recreation since March 11, 2020.

The SVD said they had even made travel arrangements for the students and teachers to return to Davao in the course of the pandemic. Four batches of the students had already returned in the past months, they said, and another batch was scheduled to return this week.

Netizens had mixed comments, but most expressed outrage on the handling of the situation.

Bayan Muna Partylist Representative Eudremia Cullamat, who is a Manobo lumad from Surigao del Sur, said the Makabayan bloc in Congress will seek an investigation on the police operation which she said “shows inhumane treatment” on the Lumad.

The Save Our Schools Network and other groups in Metro Manila staged an indignation protest Monday afternoon and called for the immediate release of the arrested members of Lumad Bakwit School.