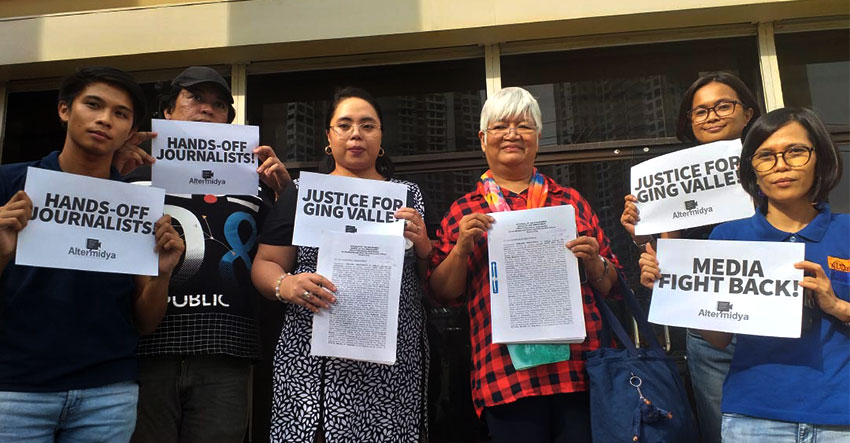 Davao Today columnist Margarita Valle (fourth from left) files counter charges before the Office of the Ombudsman on July 4, 2019, against police and army officers who arrested and detained her last June 9. She was joined by her lawyer Katherine Panguban and colleagues from the alternative media and campus press. (Photo by Alyssa Mae Clarin / Bulatlat)

MANILA, Philippines — Davao Today columnist Margarita Valle filed criminal and administrative charges before the Office of the Ombudsman today against Philippine National Police and Army officers who arrested her and held her incommunicado for almost 12 hours last June 9.

In her submitted complaint, Valle filed criminal offenses of kidnapping and serious illegal detention, arbitrary detention, violation of Republic Act No. 9745, also known as the Anti-Torture act of 2009, and, violation of Miranda Rights, or the rights of persons arrested, detained or under custodial investigation.

She also filed administrative charges of gross misconduct, grave abuse of authority, and conduct unbecoming of a public official against the officers of the Criminal Investigation and Detection Group (CIDG) Region 9 and of 102nd Brigade, 1st Infantry Division of the Philippine Army who had taken her from Laguindingan Airport in Misamis Oriental on June 9.

In her 20-page complaint, Valle said her kidnapping and detention was done by the authorities without any legal reason, as there was no evidence presented that proved her abduction to be a part of a legally authorized military operation.

Valle had also stated how the accused officers blatantly disregarded her efforts to assert her rights, which she had done right from the start, eventually causing her to suffer from serious anxieties that had almost endangered her health.

“The refusal of my captors to answer my questions as to where and what they will do to me caused me stress and fear for my safety, for my life,” said Valle. She said that her 12-hour captivity, with no communication and information from friends and family, was enough to torture her mentally and psychologically.

By filing this case, Valle said that she is standing up against the many human rights violations conducted by state security forces, not only to her but to many others who have also been taken against their will and forced to admit to crimes they did not commit.

“We need to speak up and say what really happened, they [officers accused] should be held accountable for the offenses they have made,” Valle said.

Valle was assisted by her lawyers from the National Union of Peoples’ Lawyers (NUPL), colleagues from the alternative media and the College Editors Guild of the Philippines (CEGP). (Reposted by davaotoday.com)