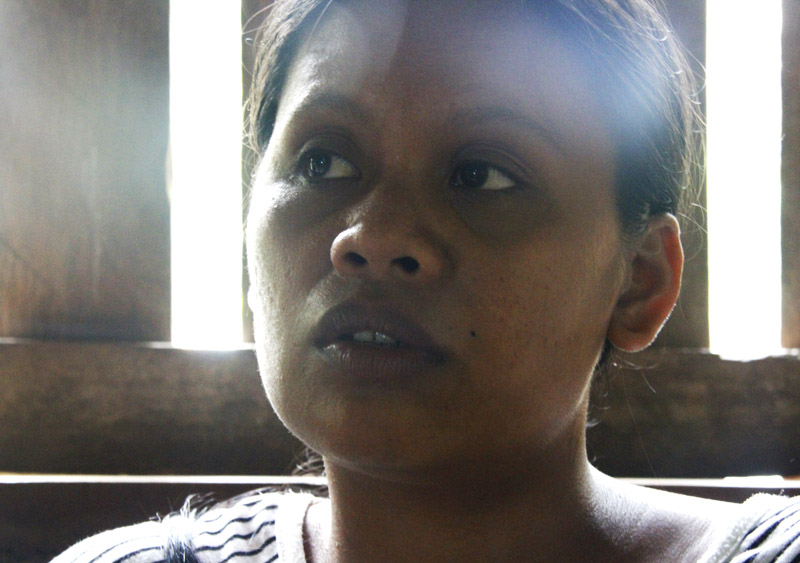 Marivic Macasag, daughter of slain tribal leader Pedro Tinga, holds back her emotions as she asks for justice for her father
(davaotoday.com photo by Earl O. Condeza)

MACO, Compostela Valley – A barangay captain here debunked military allegations that the farmer it killed was a member of New People’s Army (NPA).

Edgardo Reambonanza, barangay captain of Malamodao, said that Pedro Tinga, was a farmer, a civilian and one of his constituents.

Reambonanza reacted strongly to the claim of Captain Alberto Caber, spokesperson of the Armed Forces’ Eastern Mindanao Command that Tinga was killed during an encounter together with three other NPAs.

“Ako mka-testify na sibilyan sya, kay since 1967 naa nako diri hangtod sa akong pangidaron karon. Mismo mga silingan kaila sa iyaha. Maayo siyang tao, walay kaaway (I can testify that he is a civilian, I lived here since 1967 up to now. The community knows him, he is a good person, and no enemies),” Reambonanza said

He said he already prepared the documents to clear the name of the victim. “We’ve secured documents such as purok, tribal, church and barangay certification”.

“These supporting documents including his voter’s ID will help in clearing Pedro Tinga’s name,” Reambonanza added

The Tinga family also wanted to clear the name of its breadwinner.

“Mahadlok mi ma pagan kay ang nagakalat diri NPA daw si papa, mahadlok mi para sa among seguridad (We are afraid that the rumours spreading is that our father is an NPA, we are afraid with our security),” said Marivic Macasag, daughter of the victim.

Macasag told Davao Today that his father was not a member of the NPA.  She said that “when his father is not in their house, they could find him in their farm.”

“Paunsa daw siya makaatiman sa amoa og sa iyahang umahan og manihan og sa amoa kung NPA siya? (How could he manage his farm and us if he is an NPA?),” she added

The family of Tinga depends on the peanut and rice crops that were about to be harvested.

Right now, Macasag said, “we couldn’t still go to the farm because we are uncertain of whether or not the Army are still there”.

After the incident, Reambonanza has advised residents to avoid going to their farms for the meantime.

He said that “military presence is visible every now and then”. He said he could not ascertain that there would be no outbreak of violence as he disclosed that “our barangay is also visited by NPAs”.

Reambonanza said they were not scared of the presence of the military “but we are scared of what will happen if the two forces will meet in our community” (Earl O. Condeza, davaotoday.com)