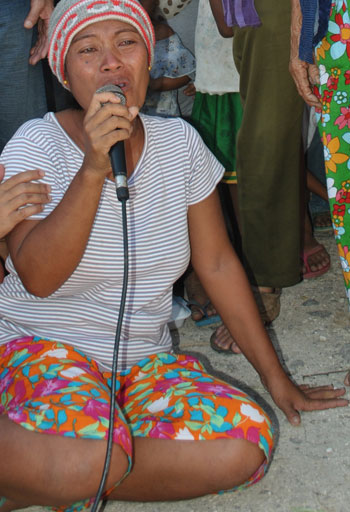 FALLING IN GRIEF. Gina Batoy, wife of Arakan peasant leader Ramon, falls to the ground weeping over her husband’s brutal death during a picket rally at the 57th Infantry Battalion headquarters in Makilala, North Cotabato. Ramon was killed in a raid by AFP troops in their village last October. (davaotoday.com photo by Medel V. Hernani)

Military operations in Arakan valley hinder Gina Batoy, wife of slain peasant leader, Ramon, from going back home. Ramon Batoy was killed in a raid by the 10th Special Forces three days after Fr. Fausto “Pops” Tentorio was gunned down, also in the same town. Advocates link the killing of Fr. Tentorio and Batoy as part of the abuses of the AFP counter-insurgency policy Oplan Bayanihan in North Cotabato.

She and her four children are in a secured place far from Arakan. Their lives are at stake following the violent murder of her husband Ramon Batoy, October 20 last year by soldiers belonging to the 10th Special Forces of the AFP.

“I never had the chance to visit the wake of my husband,” Gina lamented, “neither was I able to attend his burial.”

Military operations in Arakan valley hinder Gina, wife of slain peasant leader, Ramon Batoy, from going back home. Ramon Batoy was killed following the killing of Fr. Fausto “Pops” Tentorio, also in the same town. Advocates link the killing of Fr. Tentorio and Batoy as part of the abuses of the AFP counter-insurgency policy Oplan Bayanihan in North Cotabato.

After the sad events last year, the lives of Gina and her brood had completely changed.

Leaving behind their home and farm, Gina had to embrace the pains in life, inhabiting in new and strange environment while battling the day-to-day survival of her children.

A good life then

Reminiscing their life in Sitio Upper Lumbo livens up Gina’s face. “Life was good then,” she recollected, “I was born and raised there, so as the late Ramon.”

They got married in 1997 and settled in Sitio Upper Lumbo for the next 14 years as a simple family sustaining their daily needs through upland farming.

They had a five-hectare land, a share of Ramon from his family. One hectare was planted with rubber while the other portions were devoted into multi-cropping such as corn, peanuts and upland rice.

Of course, Gina recalled, they were also into crisis just like other lowly farmers in Arakan. Traders exploit them; sharing of their harvests was dismal.

Sitio Upper Lumbo is one of the far-flung villages in Barangay Kabalantian. The place is inhabited by more or less 70 families of upland farmers.

Recounting the fatal day of October 20, Gina told Davao Today, “It was unexpected. We were shocked when we heard about the news of Fr. Tentorio’s murder barely three days before.”

Fr. Tentorio frequented Upper Lumbo and other peasant villages to give various social services to peasants.

That morning, at exactly 6:00 in the morning, she and Ramon were entertaining Gaga Ortega, her younger brother’s wife and Noli Badol, their village leader who passed by after fetching water.

In the middle of their lively conversations, Gina saw a number of uniformed men arriving which she recognized later as members of the 10th Special Forces of the AFP.

After a few minutes Ramon returned being followed by four soldiers. One of them approached Ramon and asked if he could search his house.

Gina heard that Ramon refused and instead asked for warrants from the court. This angered the military.

“The next event happened too fast,” Gina said, now teary-eyed, “a soldier struck hard Ramon with his gun’s butt in the belly. I saw my husband pained, his breathing stopped and face turned pale. I shouted and begged to stop but the soldier failed to notice me. He was determined to pin down Ramon.”

Ramon managed to draw his bolo tucked in his waist and hacked the army in his front.  Gina said both of them fell to the ground. Upon seeing that their companion was hacked to death, they immediately shot Ramon and sprayed his body with bullets.

Gina escaped to the nearby house but a number of Special Forces also shot her. She was able to run and hide despite the fact that she was seven months pregnant.

The soldiers were shouting wildly, saying that they had killed an “NPA Kumander.”  They fired their guns in different directions.

Gina managed to gather her children and they evacuated to the center of Barangay Kabalantian. Later that day they were taken by their relatives to Arakan proper for safety.

That was the last time she was in Upper Lumbo. That was the final moment Gina and Ramon were together.

One day after the burial of Fr. Tentorio, the mutilated body of Ramon was finally laid to rest in Kabalantian.

Gina’s children had to stop schooling, as soldiers continued to hunt them.

There were attempts made by Gina and her children to visit Ramon’s grave but family members and supporters warned her of the dangers she and the children may encounter.

Supporters of Gina are now in the final stage of preparing all the documents necessary for the filing of murder and frustrated murder cases against the members of the 10th Special Forces of the AFP.

Aside from the documentary preparations, supporters also need to ready Gina physically, emotionally and mentally. If ever these cases are filed in court, Gina will again see face to face the murderers of her husband Ramon.

Gina admitted that until now she can still remember vividly the soldiers’ angry faces, their gestures while gunning down Ramon, their voices filled with horror and how they chased her with bullets while escaping with her children.

Soon, she said, “We shall see each other in person.”  (Alex D. Lopez/davaotoday.com)