Women Lumads at the forefront of defending ancestral land 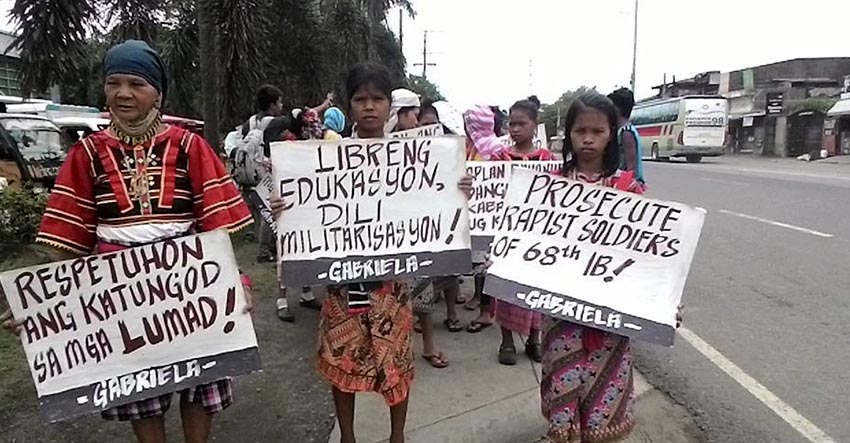 DAVAO CITY – Despite being called “the most vulnerable of sectors,” Lumad women chose to be at the forefront in the defense of their ancestral land.

“Its not a matter of choice, whether they survive or not. They fight for their communities, their children and their families,” said Sapar.

Gabriela along with Lumad women’s group, Sabokahan, protested the Army’s Eastern Mindanao Command Monday to demand that soldiers who allegedly raped a 14-year old lumad girl be “named and jailed.”

Sapar said the girl was raped “while soldiers were in their community, implementing their so-called peace and development program under operation plan (Oplan) Bayanihan.”

Sapar said the “vulnerability of women and children because of their gender and age are being exploited to disable them from acting against threats.”

“Oplan Bayanihan is simply putting communities suspected of being supporters of the communist movement in constant threat and intimidation, specially women and children,” she said.

Sapar said Bai Bibyaon Ligkayan Bigkay, the only woman Datu (traditional leader) among the Manobos of Talaingod, Davao del Norte was among those “under attack.”

Sapar said “Bai Bibyaon led the defense of her community when a logging company threatened to expand their operations in their community.”

“She has received numerous threats as she will not go silent in her resistance to the Army operations targeting civilians,” Sapar said.

Sapar said Bai Bibyaon is among the 116 adult females and 180 girls from 140 families who left their homes in Talaingod and Kapalong in Davao del Norte and Bukidnon since May of this year.

Late August, Elen Manlibaas, chairperson of the Kahugpongan sa Mag-uuma sa Kitao-tao (KMK-Farmers Association of Kitaotao), was arrested by the Army along with 15 others in their community.

Manlibaas, along with three other women were accused of being members of the New People’s Army and were ferried away in a helicopter to prison.

“The indigenous peoples (IP) school in their (Lantao’s) community like other IP schools in Mindanao is also under attack,” she said.

In 2014, Lantao and leaders of the Hugpong sa mga Mag-uuma sa Walog Kompostela (Humawak) engaged the Army in a dialogue with Davao City Mayor Rodrigo as the group alleged Army troops used their homes and school as camps.

The Army denied but Duterte said “they will really go out of the community as that is (encampment) is illegal.”

Army troops rained bullets on Seisa’s house as they alleged they were fired upon by suspected NPAs while they were “serving a warrant of arrest”.

Seisa, her husband, mother and daughter survived, while three peasants, including a former barangay official, were killed inside her house.

Seisa denied the accusations of the Army when she personally appeared before the City Council in August.

Seisa also addressed the City Council in April to ask for help against what she said was the “filing of trumped-up charges” against their members by the Army.

Muya leads almost a hundred teachers in over 20 IP schools in the Davao Region.

“A rumor was spread in Talaingod that it was Muya who engineered the evacuation of IPs in 2014. She also received numerous threats,” said Sapar.

“Data from the non-government organization Accord place 104 pregnant and lactating women as among the evacuees,” she said.(davaotoday.com)