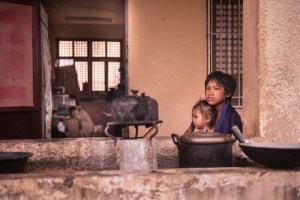 It was already dark when our convoy reached Tacloban from San Remigio Port in Liloan, the farthest town in the adjacent province of Southern Leyte facing Surigao del Norte in Northeastern Mindanao.

It was at the port in Surigao City where over 500 individuals from all over Mindanao assembled before heading on a humanitarian caravan to badly hit towns in Leyte. Under the helm of Balsa Mindanao, the mission was to deliver about 50,000 relief packs, medical assistance, and emotional help to Yolanda survivors.

“This is to reciprocate the solidarity they have shown us during our own crisis in Mindanao. Let’s give them care and compassion,” Sister Noemi Degala, convenor of Balsa Mindanao, said during our briefing. Some volunteers were also survivors of typhoons Sendong and Pablo, and also of the standoff in Zamboanga City.

As we negotiated our way on a pitch-black road along Tolosa, which was three towns away from Tacloban, we began to make out the utter destruction through the headlights. It was here that typhoon Yolanda hit her second landfall after leaving its mark in Guiuan.

The next day, we woke up to the sight of a wasteland. Looking down at Tacloban from the second floor of St. Scholastica College where we were quartered, it was nowhere close to the city I used to describe as charming.

I’ve written about Tacloban in Let’s Fiesta, the weekly travelogue of GMA Network. When we filmed it, I thought of the city as an idyllic waterfront so small you could go from its seaside parks to its downtown in just minutes.

I could still sense some calmness to it today. But it wasn’t uplifting.

Amidst the traffic along its crammed streets, the endless sight of clutter and graffiti crying out for mercy, and the chatter of people queuing to receive assistance, there was a distant silence, an unspoken grief that enveloped the city.

Historically, Tacloban had always endured the brunt of colossal disasters. Days after Yolanda, reports came out that in 1897 and 1912, Tacloban was virtually demolished by monster storms that swept across Visayas. A more chilling semblance was the account that pointed to the storm surge as the major cause of death.

During World War Two, Tacloban was also used as a battleground between the American forces and the Japanese military. It was triggered when General Douglas McArthur landed in the nearby town of Palo on October 20, 1944 while American battle ships stood out to sea, awaiting attack.

Expectedly, the Japanese navy also moved further out to the open water perpetuating a bloody clash known as the Battle of Leyte Gulf. If Yolanda was one of the strongest typhoons ever recorded, this was possibly the largest naval battle in history.

A déjà vu? It might be twice a déjà vu.

Tacloban today is a cross between a warzone and a calamity-stricken area. While surveying the city, I pictured Yolanda was like a weapon of mass destruction planted covertly out in the sky. When aimed at its target, it was too strong that it annihilated the entire city and its neighbors in an instant.

I also imagined this was probably how Tacloban looked like when the Americans reoccupied the city and the entire country 69 years ago: aircrafts with stars and stripes flying in and out, warships deployed ashore, and white men manning local operations.

As of press time, the U.S. and other foreign troops are already pulling out of Tacloban as efforts shift to rehabilitation and recovery. But the eventual departure of the remaining American forces left on ground and on ships has yet to be set.

Undeniably, the outpouring of foreign assets into Tacloban and other storm-ravaged areas has exposed everything that our government lacks. Two weeks into the aftermath when we were in Leyte, I still hear people complain that they had received relief packs from DSWD either too late or too little.

In Barangay Capirawan, our sharing was disrupted when a helicopter flew above and the mothers started waving their hands to the air. It was a sign of help. Jenny, a 34 year-old survivor, said the day before our visit, the DSWD came to their community for the first time even if the road connecting them to the center of Palo had long been cleared.

Not all families received a pack, including hers.

So when foreign aid now pours into our country, we are effusively thankful for their help was badly needed.

But while others fear of ulterior motive, Foreign Affairs Secretary Alfredo del Rosario seemed to validate the doubt when he called for an increased US military presence in the country.

“I think this demonstrates the need for this framework agreement we’re working out with the U.S. because it accentuates the purposes of the framework [one of] which is to make humanitarian assistance and disaster relief and response a very major aspect of the agreement,” he said in a speech.

Bayan Muna Representative Carlos Zarate, who was also with us during this mission, suspected that the U.S. is capitalizing on the misery of the Philippines to further its agenda in the Asian region.

“They should not use the misery of our people in justifying this constitutionally-infirmed military agreement (with the Philippine Government),” Zarate said.

With America’s continued intrusion into local affairs of the region including territorial and cultural disputes, there is a probable reason to think twice about their agenda.

Lacson was a risky choice, undoubtedly, having been linked to various high-profile crimes most notably the Dacer-Corbito case.

It was during Aquino’s term when Lacson returned to the country a free man after the Court of Appeals withdrew the charges against him for masterminding the abduction and murder of political publicist Bubby Dacer and his driver Emmanuel Corbito in 2000. On the day he left for Hong Kong in January 5, 2010, Lacson also announced his withdrawal from the presidential race that year.

Their connection is suspicious. And his appointment to manage the rehabilitation efforts of the national and local government comes out as another testament to Aquino’s selective approach to justice and perpetuation of impunity.

But now that Lacson is at the helm, he has a daunting task. After all the PDAF brouhaha, all eyes will be watching on him, on the billions of money in aid poured in and on the people who would begin anew their lives.

These lives include Tony and Perlita among the 200,000 other survivors.

In a coastal village in Tanauan, Leyte, I caught Tony rummaging through the debris left of his house for uprooted nails that he could recycle. He patiently laid each one out in the sun to dry. A carpenter and a father of six, he was building a small shanty out of scrap timber and old tarpaulin for his family.

Despite the massive rebuilding needed in his town, Tony is now jobless. “I have no money to buy new construction materials, so I have to make use with what I have,” he said.

Perlita, one of the women I met in Barangay Capirawan, received a tarpaulin from a foreign aid group and she used this cover up her roofless house. “But when it rains outside, it also rains inside because the tarpaulin couldn’t hold the water,” she said.

The scene was replayed in every barangay we visited. People are relying on ingenuity to piece together whatever was left of their battered houses.

Ardee Delola is a segment producer and writer for the National TV network GMA.