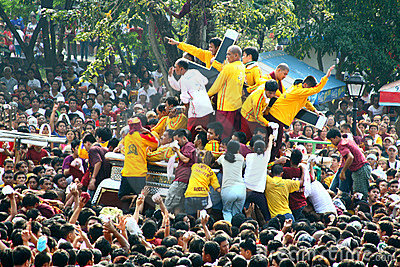 It is utterly stunning to behold such vast throngs of people participating in the ritual procession of the Black Nazarene of Quiapo. It defies the imagination that even a piece of needle would fail to fall to the ground between the densely crowding bodies of millions who joined the mass activity.  It is a cause for reflection how as an act of faith the people stubbornly exposed themselves to the elements and all the hazards to their lives just to be able to get close to the worshiped statue of Jesus the Nazarene.

But it is  also scary to witness the rushing crowds who scramble to climb up the carriage of  the  Nazarene where  some got injured– there were those who fell in their climb — some fainted in the midst of the very dense crowd  . . . It’s exulting  to know that  in the effort to be able to hold or touch the Nazarene icon nobody came close to death during the entire event.

Watching on the TV screen this awesome spectacle, you couldn’t help but utter, “Oh my God, isn’t this too much a display of one’s devotional faith? Is that really the proper manner with which to show faith and devotion to the Holy One?”

In my mind, I personally nurture a lot of questions.  One of these was to question the way by which one shows or manifests his Christianity.  What particularly motivates a devotee to expose himself, his body, his health, to all the hazards that could befall him in joining these devotional activities?

We might likewise ask: What really is the essence of being a Christian? What would truly constitute the proper acts, behaviors and actuations of a Christian devotee in his life’s trek in the world?  Would it be through “a once-a-year extravagant display of one’s faith” in a religious ceremony such as a procession and like activities initiated or sanctioned by the Church herself?

These queries can only be answered by more questions.  For instance, how could the Church allow such practices that can only be characterized as acts of fanaticism?

What is the attitude of the Church vis-à-vis such acts?  One other senseless act occurs during the celebration of the Lenten Season—the self-flagellation!  Or the submission of oneself to actual crucifixion?  Does the Church allow these in order to perpetuate their immense influence on the lives of the people . . . making sure that there is a vast reserve of faithful who would abide by the Church till the end of time,  to the ends of the earth. . .no matter their impracticality and incongruity for the real agenda for  human development and social transformation?

Soon after the event in Quiapo another equally spectacular religious event rendered its awesome phenomenon in Cebu – the Sinulog festival.  And not too far away, similar events anchored on religious significances would have their own calendared spectacles in most other parts of the archipelago, from Luzon in the north to Mindanao in south.

And the State, quick to exploit these religious and semi-religious spectacles as tourist attractions, has soon color-coded them in their Tourism Calendar – day after day, week after week, month after month, and year to year – ad infinitum.  Each time the thrill would be new, each time the ostentatious character of each event would be improved or upgraded according to the advancement in fashion and the world of showbiz.

Who says there is separation between Church and State? The parallel thrust of  religious ritual spectacles and the government’s direction in its tourism goals virtually  paves the way towards establishing the Philippine Islands as the  Entertainment Capital of Asia and the world.  At the lamentable expense of the vast majority of the masses of Filipinos who will continue to be “second class citizens” of their own country or “squatters in their own land”.  (davaotoday.com)