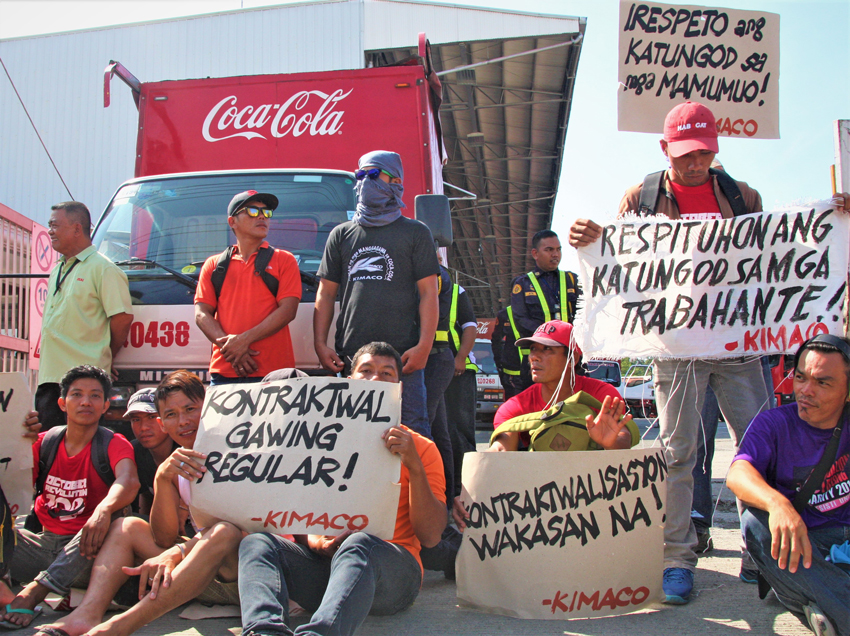 Members of the Kilusang Manggagawa sa Coca-Cola protest outside the Coca-Cola Plant in Bago Aplaya, Davao City on Monday, April 2, 2018 after they were laid off by their agency, Expert Allied Services.The workers demanded for job security as some of them worked for the company for eight years. (Kath M. Cortez/davaotoday.com)

DAVAO CITY, Philippines – Workers of giant bottling company Coca-Cola here were protesting their retrenchment from the company when they were violently dispersed, and 10 of them, including their leader were arrested and filed charges of grave coercion.

The workers staged a strike on Monday, April 2 to demand that 72 of their members be reinstated after they were retrenched late last month by their contractual labor agency.

At around 9 in the morning they were brought and detained at the Talomo Police station where they were slapped charges of resisting arrest and grave coercion.

In a statement issued by Mayor Sara Duterte-Carpio, it stated that the protest has already compromised public interest and that leaders ignored efforts to negotiate peacefully.

“The incident on Monday morning involving elements of the Davao City Police and protesting workers of Coca-Cola Femsa, however, demanded the application of urgent and appropriate police action, including the dispersal of the demonstration and the arrest of 10 protesters,” said Mayor Sara.

The mayor also said that any protest action should: (1) not block the entrance and exit of establishments (2) not to harass non-protesting employees and pedestrians (3) not to cause traffic to motorists.

The labor group Kilusang Mayo Uno demanded the immediate release of the ten striking workers and the reinstatement of all laid-off workers of Coca-Cola Davao.

“The violent dispersal of the Coca-Cola strike is part and parcel of Dutertes fascist tactics in dealing with workers who dare to fight for their right to job security,” said KMU national chairperson Elmer Labog.

In an interview with worker Jason Pangan, he said Works Express and Allied Services refused to release their cash bonds as part of their contract since 2011.

Pangan also said that many of the workers did not receive overtime pay working up to 16 hours.

In 2017, the group filed a complaint at the Department of Labor and Employment (DOLE) for violating the DOLE Department Order No. 174, series of 2017 (D.O. 174) or the new regulations governing contracting and subcontracting arrangements.

Coca-Cola FEMSA Philippines laid off more than 700 employees last month as part of the organizational structure assessment due to the Tax Reform for Acceleration and Inclusion (TRAIN) law passed in December.

“In light of recent developments within the beverage industry and in the business landscape as a whole, the Coca-Cola System is undergoing an organizational structure assessment. This involved a comprehensive review of the roles and responsibilities within Coca-Cola FEMSA,” the company said.

“We also strongly condemn Coca-Cola FEMSA for its conscious failure to recognize its long-term workers as regular employees, violating their rights to security of tenure, joining the union, and to a living wage,” EILER executive director Rochelle Porras said in a statement on Monday. (davaotoday.com)