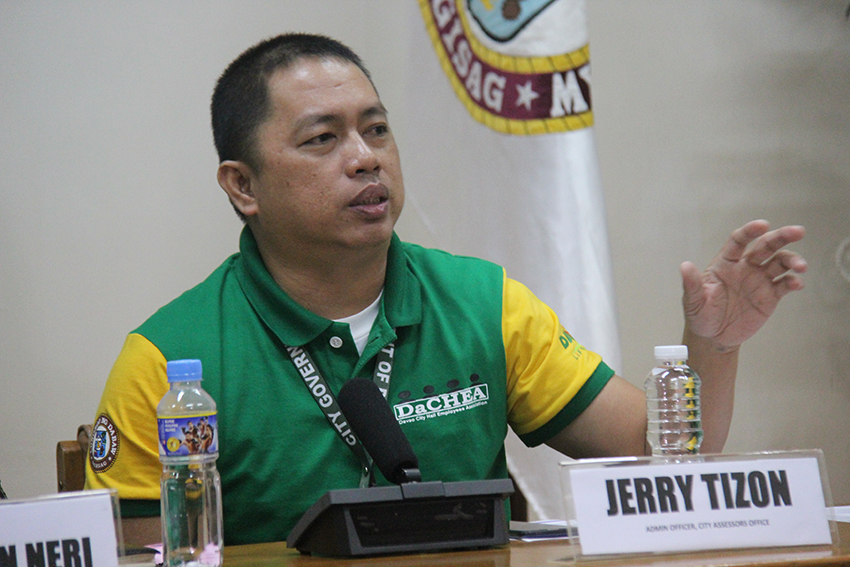 Jerry Tizon of the City Assessor’s Office says on  Thursday that they are proposing  to increase the tax by 1,000 percent. (Photo by Jason Amisola)

DAVAO CITY, Philippines (Updated as of 11:20 am February 10, 2017)— The Davao City Assessor’s office will pass a general revision to the Commission of Audit to increase the real property ​tax of up to 1,000 percent​.

Jerry Tizon, administration officer of the City Assessor’s Office said they already expect reaction ​from the public ​but he said the increase would try to catch up with the years when there were no periodic assessment of the ​tax structure.

​He said the last amendment was made in 2008. Tizon said the responsibility of their office is to prepare the general revision however, it is still up to the City Council to approve the revision or to adjust it.

Councilor Danilo Dayanghirang, chairperson of Committee on Finance had proposed a higher 2,000 percent late last year. Dayanghirang assured however, that they would find means to ease the impact of the increase to the public.

The councilor said that the COA advised them to impose 10 percent increase on its real property tax every three years which the city failed to perform during the previous years.

Dayanghirang said the city did not increase its property tax to encourage more investors to invest in the city but he said it’s time to review the real property tax.

“I think it is already the right time to revisit it,” he said.

“So after 10 years they have already complied with the 100 percent of the now doubled amount of real property tax,” he said.

Dayanghirang said that there was only a 3.5 percent increase of real property tax that in 2016, the city collected only P6.3 billion while in 2017. This year, the plan was to collect a slightly higher P6.9 billion tax collection.

“That is only an increase of P600 million. If only the local taxes were increased then maybe we may now have P7 billion funds,” Dayanghirang said.

He said if the increase will be approved, the city will expect an P8 billion increase of fund by 2018.

The CAO hoped that their department can submit the scheduled market value for the general admission by last week of March.

“All of the developments will be put there and we will submit it to the (Commission on Audit),” Tizon said.

Tizon said that if they can submit it by March and will be approve by the City Council, the public will expect its effect by next year. (davaotoday.com)